Floris: Therefore I usually find it good to first approach the upper right, and then invade, making Black overconcentrated: if he plays along, that is.

Patrick Traill: What is the premise of therefore? Some context needed! 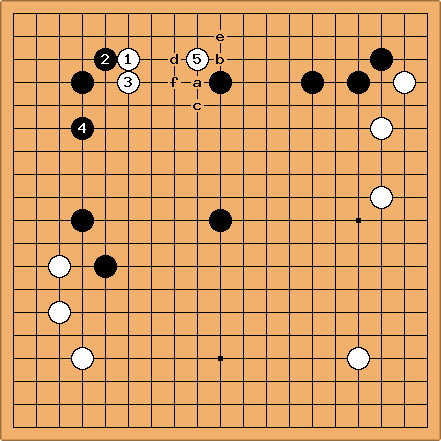 is good for White, makes a and b miai for a base, and in this making Black overconcentrated or reducing his territory.

aLegendWai: It is my little opinion. Correct me if wrong.

is not good to W. Playing a diagonal play 1 line lower than the opponent's stone along the edge is generally bad. Also a and b are not equal good points. Now B should play at b. (Playing a gives the chance for W to destroy the upper right side. Hardly good in this case).

So if Black b, White a, then Black c is a good hane to press W severely.

at b/e is possible in some cases but probably not in this case. Black is too strong here. I deem if the 3 B stones on the upper right does not safely guard the territories around, b/e can be good, right?

The idea of playing at f is a light play to escape (not for a base). You may consider this as well. But probably bad in this case.

Anyway, I think it is a hard time for W. Maybe

shouldn't invade too deep in the first place. [6]

aLegendWai: Andre Engels had talked something similar to me. Click on [3].

Mef: Much of this has already been discussed farther down on this page.

Actually, Black made a (small) mistake (not wrong in all situations) somewhere, can you spot it?[1]

, above it is better played at

in the following diagram.[2] 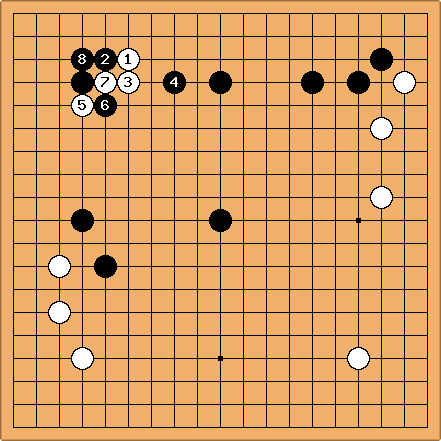 Out of all the other pincers

puts the most pressure on White. The continuation up to

is most usual, except Black will have a huge advantage in the coming fight as White has two weak groups. Notice the black move at tengen is a ladder breaker here and without it

is much less severe (makes the cut at 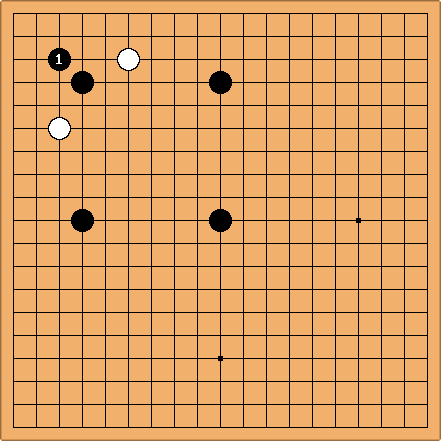 tderz Above diagram follows the same concept as Go Seigen's advice to play - the usually disliked (despised?; we usually teach kyus not to play like this, but to go out into the center [1])

here - because Black has a strong environment, hence wants and needs to fight for maximum efficiency.

[1] Go lives up by the exceptions! 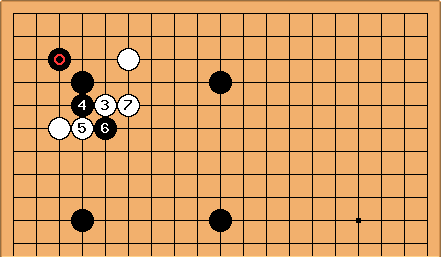 Black has the upper hand in any subsequent fighting in this quarter of the board.

[3] Andre Engels: I very much do not agree with most of what you are saying here. 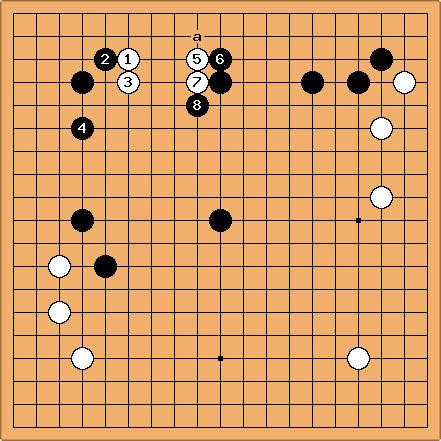 in this diagram looks bad to me. Black happily takes the opportunity to strengthen herself with

, then attacks White's shape with

(looks better than a). Sure, White will live, but Black becomes thick. BobMcGuigan-- See Angle play after diagonal attachment

tderz Appeal to authority - if it has been played by professionals? (ok, logically irrelevant, but rhetorically quite strong, ^^) 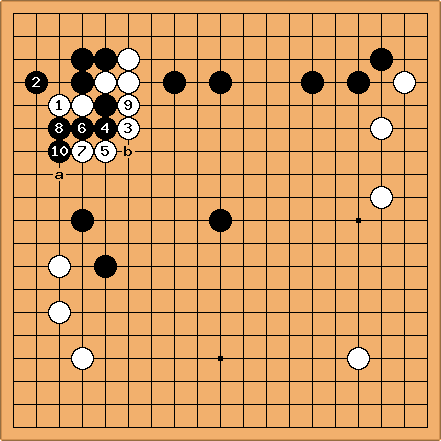 In the diagram that you consider 'better', I have the feeling that

is a serious overplay.

[5] tderz: saving pivotal cutting stones is
common sense within the context of the fundamentals of Go.
It could only be bad if there was something (even) better.
Furthermore, White is left with cutting point b and has a hard time to make eye shape - if any. While (ok, more seriously: after) white has taken care of her group), Black has sente to do whatever he likes in the white spheres of influence.

In conclusion, the sequence 3-5-7-9 rather gives the impression as if a loose ladder or geta was started - which in the end does not work (ouch!).

If anything wrong with the cutting stone

in the diagram [4] in question (which might be possible after all) - then, at least, this diagram here does not seem to prove it (at all).

Rather , these moves 3-5-7-9 give a blunt and unimaginative impression. Many lose-looking, vague moves would have much more objective potential than this sequence (my opinion and cf. [6]).

I don't agree that White is left with two weak groups - Black is so strong in this environment to start with, that White should have no qualms about sacrificing one of them. Here you see one possible continuation. 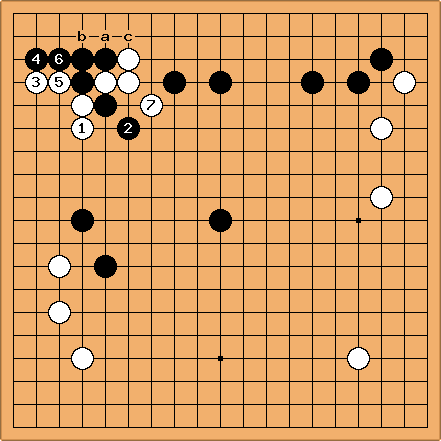 Here is another possibility. Black might seem to be doing well, but White a-Black b-White c, killing the corner is hanging above him, like the sword of Damocles. .

Charles Like Andre, I have difficulty accepting these statements.

In the four star points box formation, my database gives the diagonal attachment like this in 15 cases out of 15: 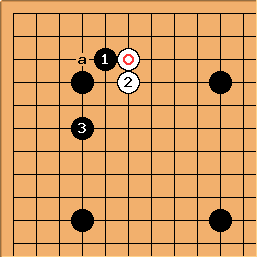 So I doubt that

is really a mistake.

aLegendWai: I would like to know why the exchange

is needed. Is it good? (Say why not

play at a instead?)

Also, I don't like the angle play for White here except in a different context. See discussion at Angle play after diagonal attachment. 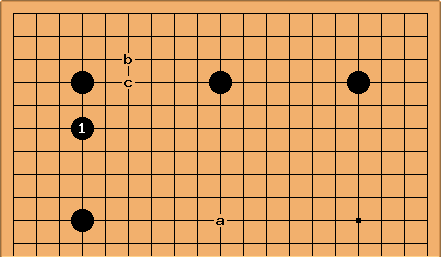 For players who are uncomfortable playing at Black a and allow an invasion at White b, he or she can consider playing at

or c instead. Then at a later move, Black can play at a if White has not already played in the vicinity. 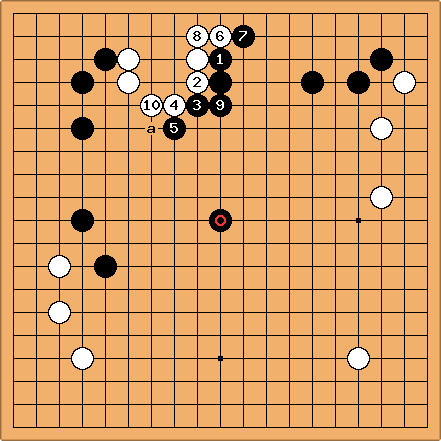 tengen stone really doesn't do much at the moment and Black is fairly overconcentrated in the top right. I suppose a move at a would make it easier to make territory with the tengen stone but then White can take a remaining big point on the board. 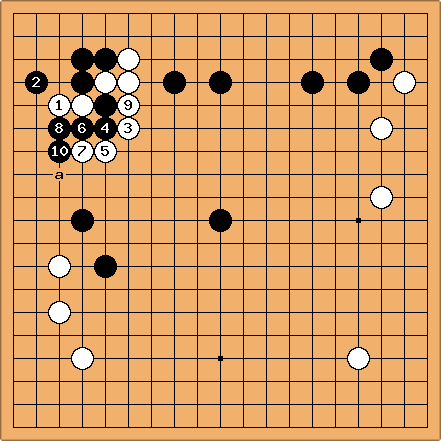 I cannot call this a good result for White. Black is whistling while solidifying tons of territory as White is fleeing for life. 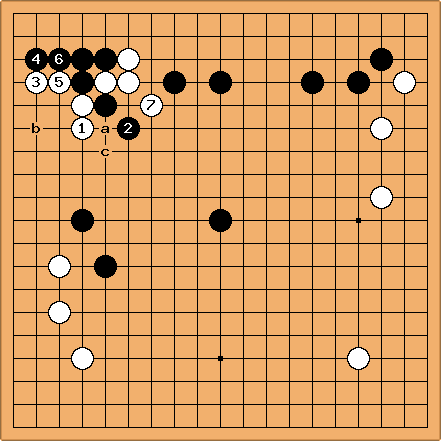 is a bit mild, maybe at a is better to put more pressure on White. Also, after the sequence you show up here, I think Black b is a very severe follow-up (this would have been even more severe if

was at a, but then White wouldn't play

). Sure Black's corner isn't alive yet, but he should first worry about making profit from attacking the two white groups before worrying about the status of his corner.

tderz I do not look at all in detail into this matter now (it's late). I do not want to say rightout that

is slack. However, my flash impression is that moves like c or

) are very often tesuji (one just have to chose the side). Also a move at a takes at least liberties (ok, also of the own stones, but B is fighting a home game here) and enables much better moves as b. My 1st choice (or thoughts) would be to decide here on either c or

Also, I don't think it is an overplay: it was taught to me by Guo Juan and I doubt she'd teach her students overplays :/[301] 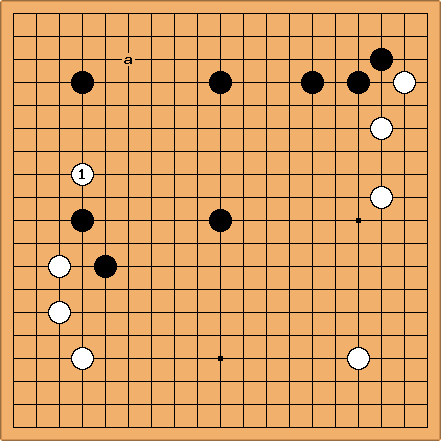 Charles You know, Floris, we can't just accept that Guo is your teacher, she tells you things, you tell us, and we have to agree! 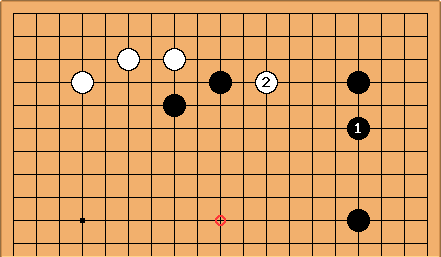 OK, maybe I now start to understand. Given this position, the pros just don't add the tengen stone (Black at the circled point). The widest path here is

to invade. Perhaps what Floris is telling us is an answer to a 'what if?' question. What if Black does make a four star points box formation? That's not so common in pro play - tengen isn't so easy to use. But without any examples for the 'pro invasion' diagram, what can one say?

If I can tentatively reconstruct the lesson:

Black's use of tengen here isn't favoured by pros. But amateurs often play it. If White enters a box formation that isn't really well constructed, maybe immediate life might be enough (showing why Black's strategy with tengen wasn't so good). Therefore Black must play a more aggressive way - the requirements of the position dictate it.

I'll accept that the angle play might be appropriate here, then. There is another way to play, also needing consideration. The general technique has been called digging in?,

Therefore, going back to the starting diagram, we could call 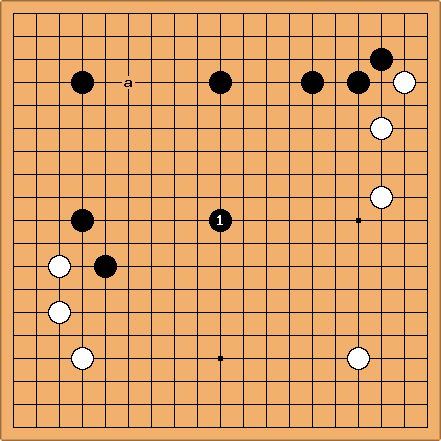 It probably isn't the case that

is the biggest point. Black must make sure this stone is used to fight.

White has played a strong group plan on the right side. This isn't a case of making Black over-concentrated, though.

I see that this position has occurred in a couple of pro games from China. In both cases Black played at a instead of