Some very basic remarks about sanrensei. 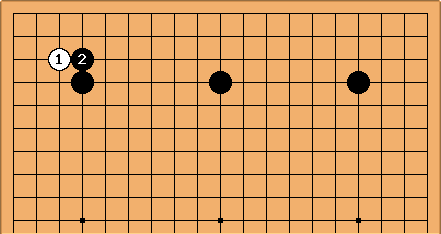 If White invades directly at 3-3, Black should definitely block as shown. 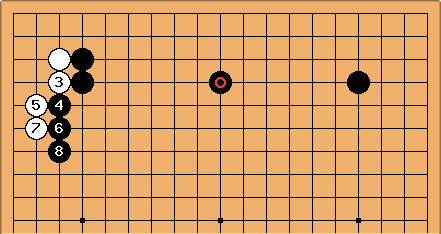 Black can be quite content with the standard sequence here. The 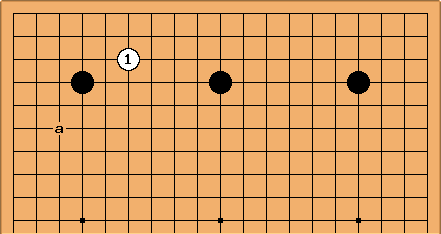 For White to play an approach inside the sanrensei is somewhat better than the immediate invasion (except in cases where White's take on the framework theory of the overall position is that making one group live quickly is a good idea). If there is a chance to play at a instead that is typically even better. 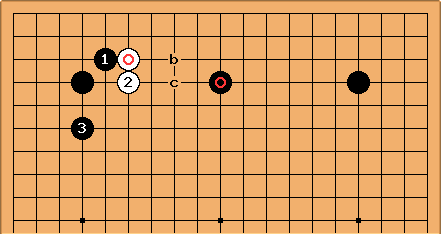 Now Black almost always plays the diagonal attachment, to set up an attack. This is the correct way to use

. White's most reasonable continuations are at b and c, to form a small base.

erikpan: Quick question: why shouldn't black just take move 3 on b to prevent a base, and what can white do in that case? The two white stones look a bit lost after that.

Anonymous: The two white stones are already a bit lost; they're pincered by

so a black stone at b isn't needed. If black does play 3 at b, it allows white to solidify his two stones by taking advantage of black's unfinished shape on the left.

at b then White can attach at

as shown in this diagram: 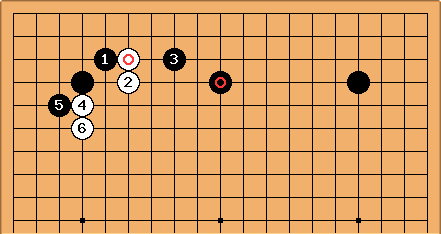 This looks very good for White since his thick position negates Black's potential moyo, the reason the sanrensei was played. Also there remains some aji in Black's upper left corner.

is already pincering the two white stones is valid. Playing the "additional" pincer at

is thus inefficient. However, in handicap games White might try extending underneath the 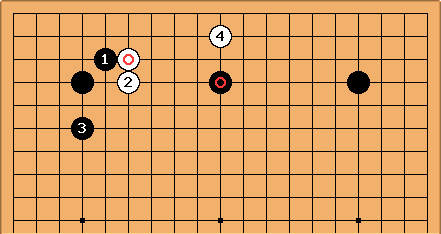 This is not usually a good move for White because Black has various ways to take advantage of it, but it is also a place where Black can easily make a mistake.