This is my first game after attaining 10 kyu ranking on KGS. Please feel free to comment. 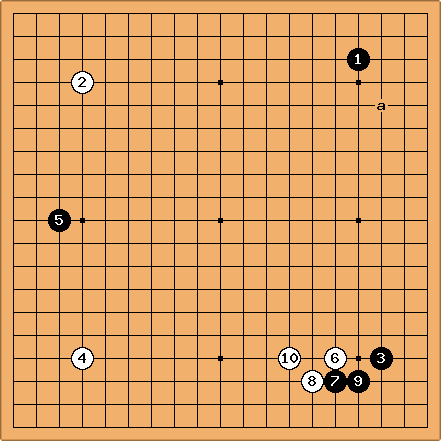 at komoku do not finish the corner, both seek to become a shimari, whereas

at hoshi are complete unto themselves. Due to this,

is misplaced. It is more important for Black to complete a shimari than to enter the left side of the board.

results in the Enclosure Opening and forestalls a play by White at that point. By contrast a, in place of

, creating a shimari in the top right corner does not cooperate with the Black stone in bottom right as well as

. If black was going to play something like this, at least one of

should have been played at the 4-4 point. As it is, the only thing

does to white is prevent a san-ren-sei opening, which white probably won't do anyways. As it is, black's play allows white to make two good approach moves to the right two corners.

dnerra: I would be a little bit less religious about this. Hey, black is claiming the two corners are miai, so why not take a big point somewhere else instead. Yes, probably it is not absolutely optimal, but I would not expect any noticeable (to me) benefit from it if I were white. And, indeed, after White 18....

works well with both the lower right thickness and the lower left hoshi.

on the third line... All those stones on the fourth line make me a bit nervous.

Fhayashi: Hmm, this is good food for thought. 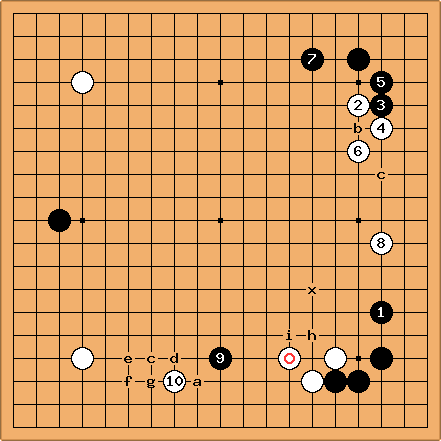 at a would have been joseki, but I figured it would be a bit slow, and even if black were to play on the third line somewhere around here, I could pincer from one side or the other to 'activate' the corner stone in the lower left. As you can see by my play so far, I like the 3-4 point high approach, and I like the variant as played rather than

at b. Now, the joseki move at

combines both extension from

, but also serves to limit the development of the black lower right corner.

HolIgor: I don't approve of the timing of

. If you did not want to finish joseki at the bottom then the marked white stone (

on the previous diagram) looks redundant. As the result the black stones in the corner became stronger while the marked white stone is not a very useful. I'd play

on the previous move or the marked white stone had to be at x.

Evand: I think you are looking at

in an effort to get

an extra space down is misguided -- that seems too much like playing near a solid group, which isn't a good idea. So, I prefer the variation with

at b. It is more solid, and the invasion point at c is protected against. Now, all that said, I might be wrong about the final conclusion ;)

dnerra (following up on my comment above on White 5) I think here black has already psychologically succeeded in his strategy. White rushed to take the second corner instead of completing the joseki, and now white faces an attack on his stones in the lower right, and these stones might quickly become heavy. I would defintely prefer black now.

, I wanted some sort of pincer. As a habit, I play either two space extensions (as in c) or the 'big big' knight's move (

. I personally don't like to play the three space extension of d, because I find it difficult deal with a black play at e. With

seems like a bad move to me. It is too close to (relatively) strong stones. I believe

is the correct answer. Here, the consideration for where to put

. For other sets of Black stones,

at f or g could be appropriate; e and c are generally played for their relationship to the left side, e.g. as part of a moyo strategy. The point is to get close enough to the black stone to restrict its movements, while still making a nice relationship with the hoshi stone. By the way, if you play d and black invades at e (wouldn't happen here, this is in the general case) you usually need to answer with an attacking move like a diagonal move or one point jump. Because Black is high, he will have trouble making a base, and will need to run into the center. So, pick the direction, and give chase.

is a good answer, but nevertheless

is good. I almost think it is the only move here. White has omitted making a base, and black should take that opportunity to create a potentially heavy, weak white group. The only comment I have about

is that one would love to peep at h beforehand, but that does not really work well as white resists at i.

mAsterdam: The 34 Point High Approach Inside Contact Joseki certainly lives up to it's reputation of being the most common of all Joseki. In both cases White chose the hanging connection variant. In the first one,

This not making the last move of the joseki in theory leaves an unbalanced situation. This may have triggered 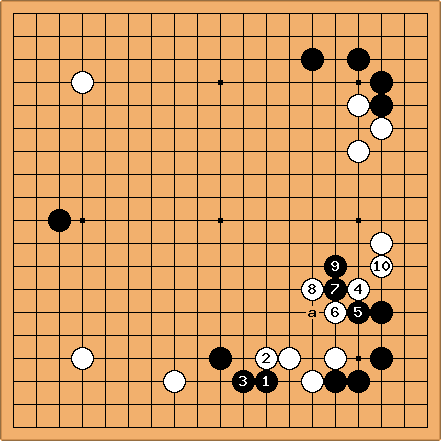 is a very typcial mistake. The move is white at a instead. Probably black will still extend at

is much worse placed than the alternative at a, as the latter does not leave a cut (and gives eye shape, too).

This is such a frequent shape mistake that I can almost promise a gain in half a stone by understanding this concept :-)

Fhayashi: Hmm, is this what they mean by extend from a crosscut? 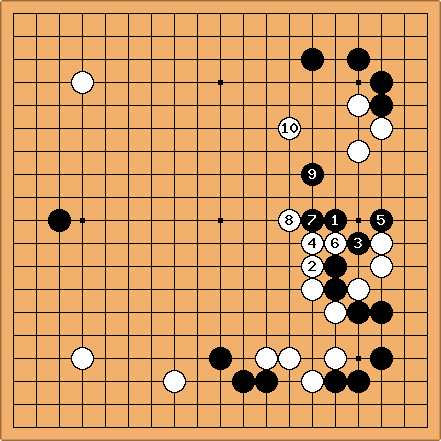 unkx80: White 36 captures two essential cutting stones. Obvious blunder aside, I would say that Black 33 should be played at 34, with better shape. 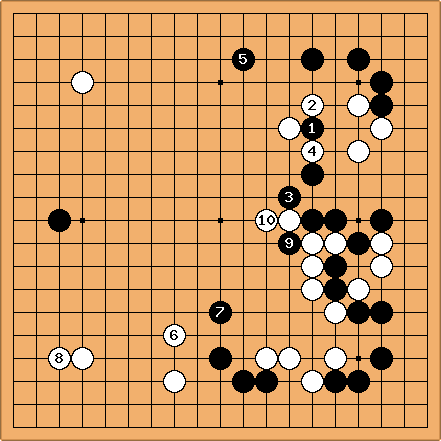 seems inconsistent. Better to not play

at all and play first at

cuts off white's stones in the upper right from the lower right group using a splitting attack, but

is a typical mistake and deserves a few words. Black had to atari from the other side playing at 10.

voluntaraly splits black forces into two weak groups. Black is never going to catch white stones in the middle as he has to play from both sides.

Playing at 10 and then connecting black has wider exit to the center and puts some pressure on the white floating group.

Watching the games of the stronger players you will see many example of the attack that leaves both opponents in single piece rather then the cut. 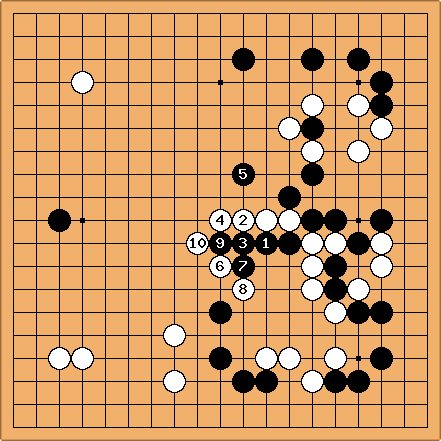 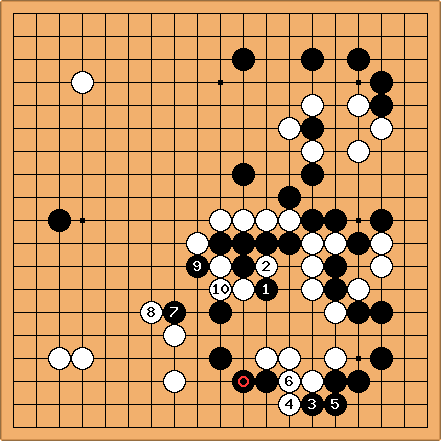 should, of course, be at

. This is the potential that black has had since move 23 (

. I'd simply capture. Why give oppponent one more forcing move? 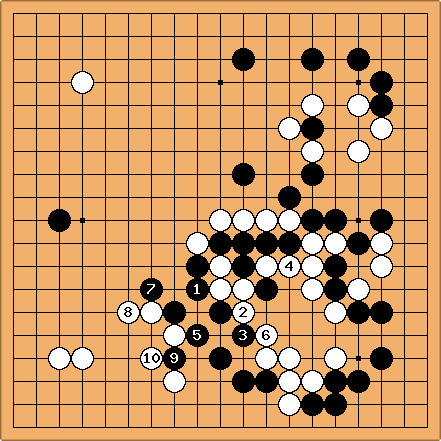 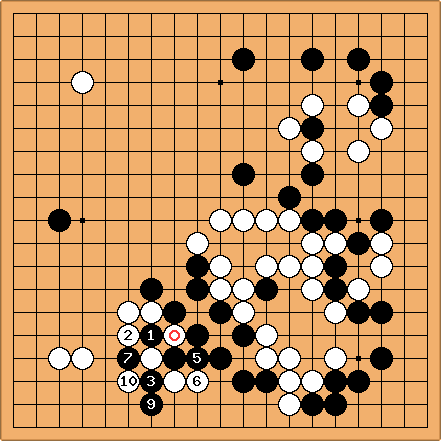 is very bad. Look at the next diagram.

gives the opponent a target for attack again.

here white keeps does not have as many weak points. 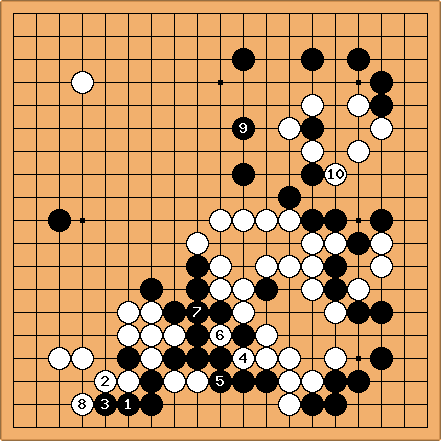 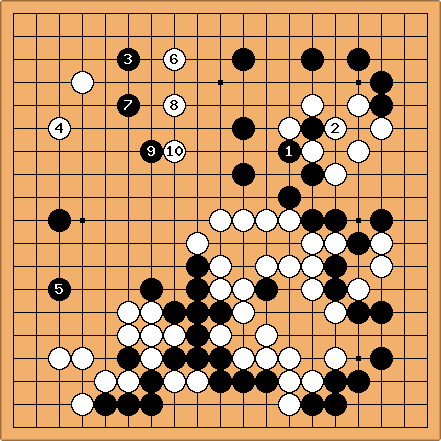 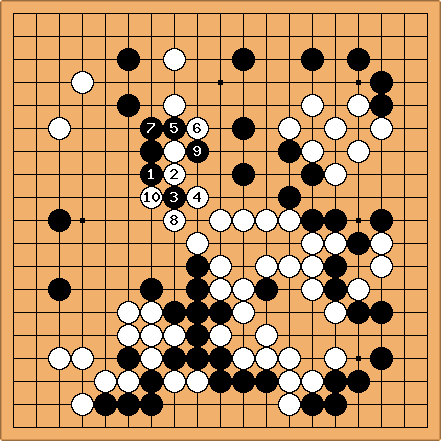 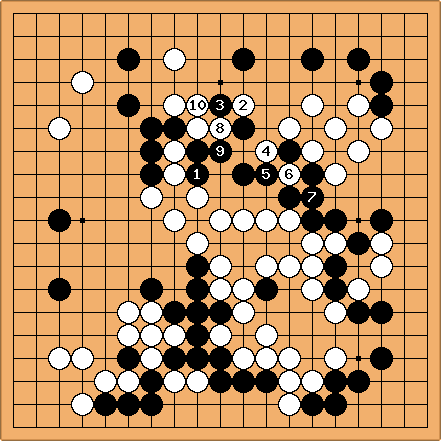 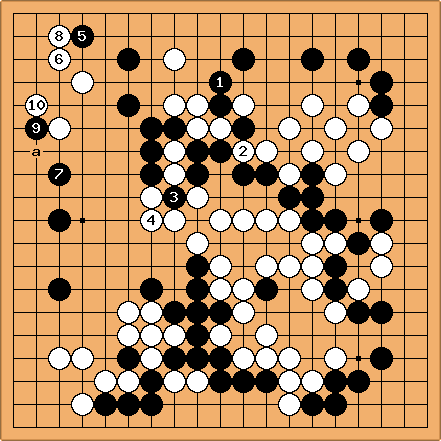 is bad, as it asks for

, which only gives white the corner. Better the double sente move of a, or even better the invasion at

HolIgor: What is the reason white did not play a instead of

Fhayashi: Because I am not good as I want to be yet. 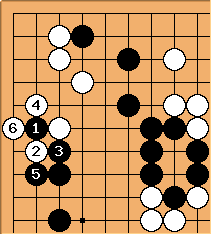 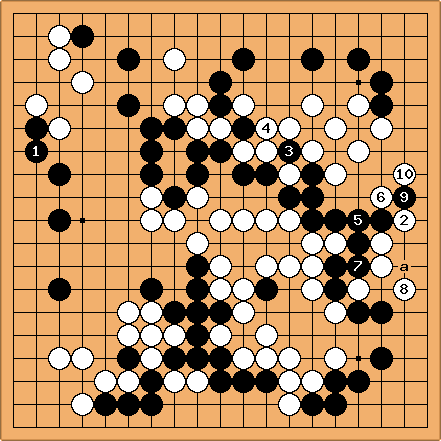 Fhayashi: I (white) messed up here on the right, as you'll see.

at a would have been better.