This is intended to be a quick reference to the sizes of various typical endgame plays. It was inspired by the Ready Reckoner page.

Assume all groups are alive.

Some of these positions I find are common in my games, but I'm not certain as to either the value of the play, or as to the best follow-up. Please comment and correct as needed. 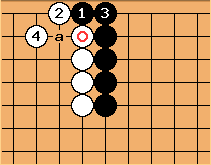 can be also played at a.

Bill: We cannot be sure that this is double sente without seeing the rest of the board. (See Double sente is relative.) In a real game this will typically arise after White has just played the marked stone, as part of a gote sequence for White.[1][2] 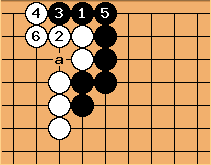 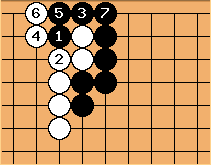 ) moved to Common mistakes in Yose. 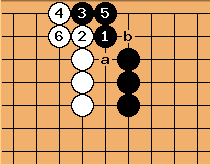 6 points, double sente. White has the one-point sente follow-up exchange, a for b.[4] 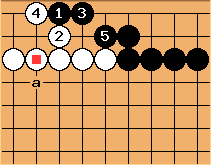 The Monkey Jump 9 points in Gote. Can be sente depending if the marked stone is at a.

See Value of a Monkey Jump. 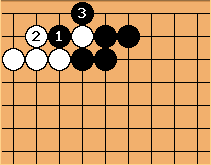 Not certain of this one.

Charles In this position, six points.

Charles See example at double sente gain discussion. While I know what Bill is saying, I'm not sure that saying it here is compatible with a Reckoner. Such things are found in some of the Japanese endgame books, as lists of plays and values. All sorts of qualification and refinement have to go on, even when the values are given in a shaded way such as '3- points'.

In short, such a Reckoner cannot give all the information an expert would desire.

Bill: The point is, double sente is not a question of reckoning. Humungous is good enough. Already with Ogawa's book you see questions, because the value of a double sente should be a fraction with a denominator of 0! I note that, in the latest edition of the Nihon Kiin's Small Yose Dictionary, the reckoner does not include anything but gote. That avoids the problem of the size of double sente and the old problem of presenting 3-point sente and 3-point gote (deiri counting) side by side as 3-point plays. Despite the disclaimers, that led to confusion.

Charles I'm going to lose any argument I have with Bill on this area. But you do need to know the size of double sente, not just whether they'll be answered. For example some other sequence you play might lose you the double sente play, making it an adverse one-sided sente; and that's a trade-off you have to evaluate by factoring in the loss. 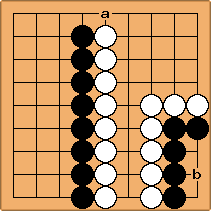 (Sebastian:) I'm not good enough to understand the theory you guys are discussing, and I'm probably suicidal to pick a fight with Bill on his turf. But does this really require complicated theory? How about this example? I, for one, would throw all my remaining go stones at Bill if he had advised me that a is humungous. >;-)

Bill: You'r not picking a fight with me. I said that we cannot tell if a is double sente without seeing the rest of the board. We seem to agree about that. :-)

(Sebastian:) I see! So you weren't questioning that it was 4 points sente. In the context of this example: You didn't mean that a was huge, but that

in kokiri's continuations is huge, correct? It really is! 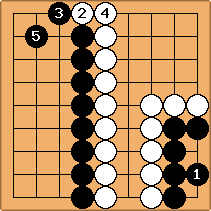 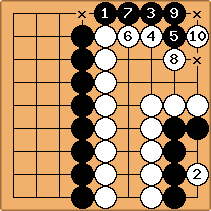 kokiri: This could be one continuation if black plays 1 and the score is 27-23 to black after the dame at x are filled. 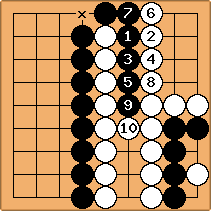 This also ends up as 27-23 black. I'm not sure if these are the best ways to play, but unless I'm missing something, they show that the hane conveys a very big threat.

(Sebastian:) Wow, this is humongous! If the board were bigger, it would even be more.

(Sebastian:) OK, let me try my luck at my first thermograph. Would it look like this?

As I'm trying to label the y-axis, I realize that I'm still confused (see Thermography / Discussion).

Bill: Here is what we know now about this thermograph.

(Sebastian:) You certainly don't mean that the walls are infinitely high? If the temperatures are just unknown, and there exists a thermograph, doesn't it look like my attempt? (Don't take the diagram literally, though, in that it looks like tR < tL.) We know that each wall will at some point turn towards the mast and meet it at some value tL resp. tR, don't we?

Bill: I have added some ?s to indicate uncertainty. We know that at some point the walls meet to form a mast. Because of the near symmetry, it is likely that it is gote, with a hilltop formed by two walls at 45 degree angles.

(Sebastian:) Good. Thus, we know that the hill starts at tL-2 and tR-2, respectively. So we agree on the mathematical facts and it's just a matter of taste how best to represent them graphically. I like your idea of question marks, and I included them in my drawing.

Bill: The shape you have drawn is one possible pattern. But, really, we do not know the details at the top of the thermograph.

To find out more we have to analyze the different followers.

(Sebastian:) Can we really say nothing about tL and tR? Why can't we just go from kokiri's continuations for tR? I thought, the point of a thermograph was to show how the score for a given move dependends on temperature. I would be disappointed if it failed in such a basic case.

Bill: What do you mean, basic?

(Sebastian:) I meant: A situation that even a beginner such as me should be able to handle.

Bill: Do you know the best play if the second player does not reply locally to the hane and the first player then continues locally? It's far from obvious, isn't it? This is definitely an advanced position.

. Re your first question: In this example, we have kokiri's continuations. If we assume that they are the best play, doesn't that give us what we need?

Bill: Well, I might assume that I am a pro. <shrug>
Besides that, finding a thermograph typically means determining a whole tree of plays, not just a few lines. It is really an analytical tool. In practical play, you usually make do with estimates.

Alistair Turnbull: Bill, can you at least give some plausible theormograph shapes that might be correct in some situations? I would like to get an idea of the scope of possibilities.

mAsterdam Would it be correct to state: when there is nothing bigger left on the board this is double sente? I (lowly DDK) am trying to grab this. After reading sente, double sente and double sente is relative this is how I understand (???) it. Apologies if this is the wrong place for asking. Maybe somebody who remembers being a beginner should edit those pages.

Charles You have to separate counting under certain assumptions, from judging whether those assumptions really hold. In practice certain plays are double sente: in theory there are always problems, concerned with the argument that with best play they might have been played earlier by one of the players.

Bill: It's double sente when, whoever makes the play now, the other player should reply in gote (perhaps after playing kikashi first). In general that means that the gote replies are bigger than anything else.

Bill: Ditto about double sente. In addition, this diagram leaves out too much about the surroundings. Why shouldn't Black cut at a, for instance? Either with

or after White's supposed sente sequence?

Charles Bill, I really think if we have to bring the lawyers in to draft the statements, we'll kill the usefulness by qualifying everything.

Bill: Again, we cannot be sure that this is double sente. In fact,

is frequently ignored in pro games.

Charles Not something that is easily discussed; but a quick database search on a typical position suggests a play like

gets an immediate reply only 50% of the time. So Bill has a strong case here.

dnerra: And when it is answered immediately, I'd claim that it has usually in fact been a one-sided sente play. I.e., the follow-up for one color was so much bigger than the opposite that it could be considered its priviledge. I've looked through quite few examples where it did get answered immediately, and apart from one instance I could not possibly imagine a direct answer had the other player taken this point first.

JF I wonder whether there's a useful distinction to be made. Of course it's a yose play (Japanese sense: sealing of boundaries), but there is a higher level in the hierarchy.

Further comments by JF moved to Getting sente endgame plays.