Value Of A Monkey Jump

In Monkey Jump, unkx80 wonders what the value of this sequence is. I will try to answer this question.

To know the value of the moves, we will have to look at the difference in outcome between various results. To make that easier, we will define some absolute values for the outcome. To do so, I have taken the result to the left arbitrarily as my zero-point - any result better than this for Black is given a positive value, and result worse is given a negative value.

We will have to compare the result with the result we would get if White played first. For this result, it is important to know whether the hane of

is sente. If it is, we may assume that White plays it at some time in the future, and the outcome is -6 (White has the four marked points more than in the zero diagram, while Black has played two moves in what is there considered his territory). If

here. White's territory is 1 smaller than in the 'zero diagram', while Black's 0.5 larger (depending on who gets to play at a), so this is worth +1.5.

More complicated is the situation when White captures at

If White next plays at a, we can regard this as sente if the hane at 3 in the 'White plays first' diagram was sente (Black will lose quite a bit if he allows White to capture once more), leading to a result of -2. If it is not sente, the value is again the average between the result if Black plays next (-2) and the result if White plays next (-2 2/3), being -2 1/3.

So what is now the result after White's capture? If the hane were not sente, it is simply the average between Black moving next and White moving next, which is -5/6. If it is sente, we will assume that the value is -2, that is, we assume that White's original capture is gote.

is sente in either case. So assume

(Suppose that the value after

is gote, the value before

Andre Engels waiting for people to correct his calculation errors...

Bernhard Herwig? As Bill pointed out, White's capture is sente. So it becomes White's "right" to play that move. Andre already calculated the score of the position after

and Black a: +2/3. This is now the expected position after White's monkey jump. So the score after the monkey jump is 2/3. Compare this to the value -4 or -6 if White plays the reverse sente. You get: The value of the monkey jump is 4 2/3 or 6 2/3 (depending if White's HaneTsugi is sente).

Bill: All of that assumes that the monkey jump is sente in the first place. Given the diagram, that is an unlikely assumption. Further discussion below.

I think that I followed Andre's answer and agree. The one thing that I found unusual was the zero-diagram. I have not seen this approach before. I am more used to something like the one below. Is there something about Andre's choice that aids in the analysis or does it come down to personal preference?

here rather than the monkey jump in cases like this? Is this better or worse and why?

zephi? The small monkey jump is chosen for the sake of sente in situations where the large jump is gote, but the small jump is sente. In situations of a solid wall on the 3rd line of 4 stones or more, either monkey is going to be gote unless b sacrifices his original stone (and since that is the case there is no reason to take the smaller monkey jump). Anyway, a monkey jump in this situation is easy for w to handle and not worth as many points as a monkey jump under 4th line (or higher) stones

Please allow me to answer Dave Sigaty using a similar way to what Andre Engels did, except that I shall be using Dave Sigaty's notation. I'll agree that it's my own personal preference, but I guess everybody will agree that we could simplify life and do away with negative numbers! =)

Case I: If the hane at

is sente, then Black is left with 6 points and White has 10 points of territory.

Case II: Otherwise, we assume that Black and White played at

respectively and Black has 8 points and White has 10 points.

Black plays first, and the sequence ends at

. I shall assume that White gets the atari at a in sente, so Black will have to connect at b. So Black has 8 points and White has 7 points.

So what is the value of

The values of the monkey jump, and of the alternatives, a, b, and c, depend on surrounding conditions. Let us suppose that if White c, White's hanetsugi is sente, and that the white wall on the third line extends indefinitely. (In that case we know that eventually the one-space jump on the first line is worth 4 points, and can be treated as sente.)

The calculations are complicated, and I will just summarize my findings here. (No guarantee that I haven't made a mistake! In fact, since my original posting, Prof. Teigo Nakamura, 6-dan, has showed me some of my mistakes. I have revised accordingly. -- And since then, both he and I have found other mistakes. This is the second revision. {Later. WTD's suggestion, a throw-in, seems to be generally better than the book play. See below.}) Real positions will be different, anyway. Who is komaster makes a difference, of course. I will assume that neither player has ko threats, to give a neutral result.

To evaluate the position after

, we play out the subsequent sente sequences,

is the four-point play that we can treat as sente.) The net score is +3 (for Black.)

White throws in with

If White is komaster she can play

, the hanetsugi is three points sente for White. The count is -12.

In this case if White plays first, there is no sente follow-up. That means that White a originally garners two points less, and that reduces the miai value of the monkey jump by one point, to 4 5/12.

White's response is different, however. If

, White does not threaten White at 4 right away, because there is no sizable follow-up threat.

is sente later, however, and it comes to the same thing in the end.

Two points can be accounted for as the difference in white territory from intruding one point less. The actual difference is less than two points because the small monkey jump is better connected than the large monkey jump.

I was surprised to find that the difference was so large. But it seems that Black's follow-ups to the small monkey jump are worth less than those to the large monkey jump. The reason seem to be that when Black intrudes further, the weakness at a becomes more critical. Of course, the large monkey jump has a corresponding weakness, but it is already very weak, and Black's extensions do not make it much weaker.

The kosumi is worth about the same as the small monkey jump. It is very solid, and

gains three points. It takes away two points from White and adds one to Black.

gains four points, however, since a white play there takes away the two marked black points in addition when White plays hanetsugi with sente.

WTD Having set out to compose a problem for goproblems.com which demonstrated the superiority over its alternatives, of the large monkey jump to

followed by a 1 space jump back to

, when the defender has 4 stones on the 3rd line, and sente is required; I found it difficult because White can reply to

at x, rather than the book play of y. 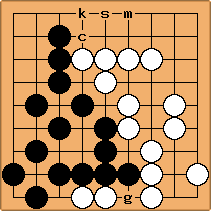 There are 4 branches of m that affect the outcome:

Let V = value of the gote move (g). If V is varied from 1 to 11, and the above sequences played out with best moves from both, the following results are obtained (X represents a solution):

The first table shows that m is generally better than s, and never inferior (as is often indicated for such a formation)  but this conclusion depends on White not choosing m3.

, and jump bck to

5633 on goproblems.com for relevant sequences in full when V = 5.

To summarise: When the defender has 4 stones on the 3rd line, and sente is required to make a gote move worth 4  10 points, the small monkey jump is the best encroachment. 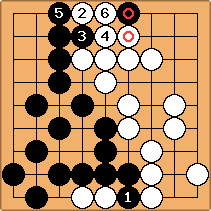 Even though it is not the book play, the throw-in for a ko is often better than the outside hane. Thanks for an example. :-)

tapir: What is the value of the monkey jump + follow-up, if the opponent has fourth or fifth line territory there?