Sebastian (This refers to the first paragraph of Thermography, which Bill and Rafael changed since): I know this is Advanced, and I'm not supposed to understand it, but the first sentence seems unclear because it relies on the vague term "the value of playing in it". Can someone give an example for this? The second sentence speaks of a wall - this seems out of context. (Pls delete this paragraph when done.)

RafaelCaetano: It's not vague. Actually, it's not "the value of playing in it", it's "the value of playing in it at different temperatures". I'm not nitpicking, just making sure that you understood the meaning, since the sentence is somewhat ambiguous (it could be parsed as "representation, at different temperatures, of playing in it"). There's an example in Cooling. There are some mistakes there, and even though Bill corrected them, the page is still potentially confusing. So please ask again if you don't understand. :-)

Sebastian: Thanks! What intrigues me about thermography is that it graphically displays concepts that are hard to express in words. I believe that it can not only be helpful for arcane advanced problems, but also for beginners, who have not read CGT, but who like to think in diagrams.

I now got a look at Bill's

article. It contains some nice graphs and a more precise definition at the beginning of chapter 2.3. The advantage of that definition is that it does not presuppose knowledge of the terms wall and mast. However, that article quickly leads into unknown territory. I'm wondering if this concept can be explained with a simpler terminology. E.g. I couldn't find out

Tom:G_super_L is a left option of G, ie a position got from making one black move in G. The _sub_t refers to a 'tax' level of t, or roughly speaking a sea of plays with mia value t available elsewhere. Max G_super_L means the maximum over all left options of G.

Tom: I think 'left wall' = 'left scaffold' = the wiggly line on the left of the graph together with the vertical 'mast' at the top. Actually, if you can see past the terminological confusion, the basic idea of a thermograph (as used here) is quite simple and, I have found, helpful. Of course I agree with Charles (below) that it is not a panacea, and even though I understand the gist of some of this stuff, I am still bad at go. However, I feel CGT/thermography does give you a framework to hang your understanding of parts of go on. Also, although time spent thinking about CGT/thermography has less effect on go strength than, say, thinking about life and death problems, if one finds it more interesting, then I feel the time is time better spent.

Charles I don't want to be discouraging - but I have found the study of CGT to be far from a panacea. In fact, unless I have some intuitive understanding anyway, I have found it very hard to follow. It has to be said that expositions aren't particularly helpful for that.

Sebastian: That actually encourages my desire to get a grasp of these pretty diagrams without having read CGT. :-)

(BTW, what do you mean by "expositions"?)

Charles I think it's fairly ridiculous to refer go players to ONAG or Winning Ways for CGT. I don't think the surreal numbers page here is very helpful. The Berlekamp-Wolfe book is probably better still; but the barriers to understanding are remarkably high. We have a CGT path here, with which I'm not that happy - perhaps it has been edited too respectfully so far, and is need of a shake-up. One problem generally is that undefined terms keep on creeping in to discussions: which is either a difficulty with jargon, or some problem with finding the natural logical order of concepts.

Overall, and without wishing to run down Bill's efforts in particular to enlighten us[1], I think go players still don't have the kind of intro to CGT that would make it safe as a general recommendation.

The gaps to bridge are between an abstract kind of game theory, and (for example) the idea that temperature can provide a rational explanation of the segmentation of plays by strong players.

Bill: Sebastian, let me show a rough sketch of a thermograph.

Sebastian: I'm confused: Why a 5-point sente? Doesn't "5-point" mean that the score difference between B playing here first and W playing here first is 5? Now my understanding is that scores are plotted on the -x axis. Wheareas t is a tax that is extraneous to the the local situation. What does t=2 correspond to? What would be the corresponding values in 4 points sente example?

Tom, the walls of a thermograph may be constructed from the scaffolds. Part of each scaffold becomes part of its corresponding wall. The mast makes up the rest of the walls.

The above diagram shows the scaffolds, indicated above where they cross.

The thermograph, including mast.

Bill: Above, Sebastian asks what t = 2 means. In the original definition of cooling it means a tax on a play. In applying thermography to real games, such as go, however, it refers to a property of an ideal combination of alternative positions in which to play (technically, different games in the combination). We call the alternatives the environment. Most of the time the environment has enough positions of various miai values such that, if we attend only to its temperature, we can find nearly optimal play. Here is a simple, crude environment with temperature 2.

It has 4 plays with miai values 2, 1.5, 1, and 0.5. If we are looking at the thermograph of a fifth, hotter play, for which these are the rest of the gainful plays on the board, the plays indicated by the walls of its thermograph at temperature 2 (orthodox play at temperature 2) will typically be the best plays for each player, and the result from making such a play will be the optimal result, or close to it.

(Sebastian:) Oops, I realize my question was misleading. What I meant was: "What does the difference between t=3 and t=5 correspond to?" (This is what I called uR in EndgameReckoner - maybe we should move that discussion here.) Can we simply say that in standard cases the "roof" will always have an angle of 45° (1 miai point / territory point)? 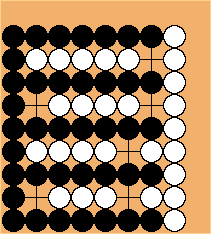 Note that the first player gains the same amount when the temperature of the environment drops from 2 to 0 as from 5 to 3. The gain is 1/2 the temperature drop, or 1 point in this case.

In a non-ko thermograph all lines will be vertical or at an angle of 45 degrees. The mast will always exend upward from the ground, or from the top of a hill, which will, OC, have at least one line at a 45 degree angle.

[1] Bill: My original purpose with such pages as Infinitesimals and Numbers was not to enlighten people about CGT, but to show the practical application of some CGT ideas to playing go. It is not necessary to know CGT to apply these ideas.

Because of the interest of many people, it has become necessary to discuss a good bit of CGT here. I am concerned, pedagogically, that go players who are not mathematically inclined may avoid learning the practical application because they do not want to learn the theory.

Charles talks about undefined terms "creeping" into discussions. For me, that is sometimes on purpose, because of my intended audience, intelligent but not necessarily mathematically sophisticated go players. Informal notions are I believe, adequate and appropriate for their purposes. Giving formally precise and correct definitions might erect a barrier to their understanding.

I agree with Charles that it makes no sense to refer go players in general to ONAG or Winning Ways. When I have made such references, it is for the mathematically sophisticated, so that I do not have to be formal here. (That strategy has not seemed to work too well. ;-))

Charles I shouldn't duck referencing my own effort at

http://gobase.org/studying/articles/matthews/ko/part10/ . That was the final article in a ko series.

[2] (Sebastian:) Thanks for the clarification! I got caught in that trap again! I really think we should not call miai values "points" - see Miai values list / Discussion - Notation Proposal at the bottom.