Tamsin: I have been playing mostly on KGS for the last 6 months, but more recently I have felt the need for a change of scenery, and so I have been plying my trade at dashn.

The majority of players on dashn are Koreans and, what's more, anywhere from 5k* to 1k* there they play in a recognizable style. There are five main features to this style:

1) Highly territorial. They will invade anything that looks like territory early and they will choose territory-oriented joseki. They tend to cling to territory even if it means making considerable concessions in thickness or influence.

2) Power in fighting. You may find yourself ahead in thickness, but you will not find it easy to attack the opponent. These players show considerable knowledge of tesuji and prowess in reading.

3) Alertness. If you neglect a shape point or make an overly large extension then you will be punished. If you try to attack in too focussed a fashion, they will often set up a favourable furikawari.[1] The only way to stay ahead is to keep an eye on the whole board and not to get sidetracked by local matters.

4) Tenacious. Your opponents won't give in until every conceivable means of turning a lost game around has been tried. They keep trying right through the endgame, and more than once I have had a sizable lead converted into a narrow defeat because I have not kept my foot on the gas throughout the endgame.

5) Unconventional. Your opponents will come up with some strange opening play, often trying very hard to "have their cake and eat it too" by attempting to get good positions on both sides of a local area (e.g., they might invade a corner and try immediately to live on the outside as well). Some of these ideas probably come from the latest Korean jeongsuk research and are therefore well worth encountering and learning from; others are undoubtedly home-brewed, but since these players show considerable tactical skill anyway it all makes for a real challenge.

is a bit odd. The aim seems to be to settle in corner and then to attack

with a counter-pincer. Of course, it is not easy for Black to settle his stones and so a difficult running fight results.

It can be frustrating and intimidating to play against tough fighters who seem hell-bent on preventing you having any territory to call your own, and who confound your knowledge of joseki with their strange-looking openings. But it can make for some exciting and fascinating games.

Please post your comments and own experiences below. I am particularly interested to know if these observations reflect the Korean pro style of go or any kind of "national Korean style" in any ways. I did play with some frighteningly good Korean players in Flushing, NYC earlier this year and I got absolutely whipped. Their approach seemed similar to the outline given above, but since I was much weaker than all of them I feel unable to make any confident statements about their style.

stones must be bad.

here have been better?

Tamsin Yes, agreed. This, by the way, underlines a fundamental point about "dashn-style openings": they're often dubious but the correct move is not easy to spot, especially if you're used to playing on a server such as KGS where people tend to stick more closely to the book.

It turns out that in one of Shusaku's games, this was tried: 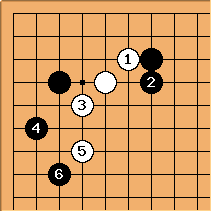 pincered on the top side.

Thanks for the example, Tamsin. It belongs with the diagonal plays as non-standard page, and I have promised myself to write up these points more fully.

Some of this style of play might be overplay, and should be punished.

After reading Tamsin's notes, I tried the server myself and it is a most enjoyable experience. I noticed some things that might be of interest:

- I find myself always losing the first couple of games in a session. Then I recover and start fighting back. At least at my level (~6k EGF) even if I answer wrong to a "strange" move, if the loss is not too big when middle-game starts, then I can recover.

- There is a lounge for English-speaking players, and a 5D Korean player that gladly plays and teaches if one asks nicely.

How about this fuseki :) They do like invade early. And this at the 8k level. Well It works out quite well against us KGS style 8k's. Completely unreasonable move, panic, funny mistake in response and the original mistake becomes a good move.

So in response to my shimari W invaded with marked move.

In general it seems that almost all 3 point extensions get invaded and ALL 4 point extensions will get invaded. And players are far better in building eyes under pressure than same level KGS players. But sometimes lose big because of larger scale game is completely neglected (that is even more than by average KGS 8k). 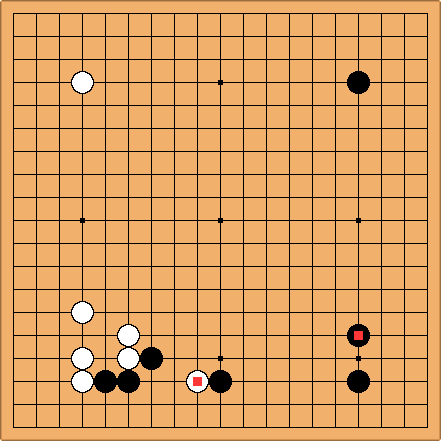 [1] This is certainly true. I was observing a game yesterday, and, after initial confusion (I had never seen that technique before) I saw the light. Today, I actually managed to use this idea in a game. Looks like I am really learning the Dashn style.

Like I've been saying on my home page here, the level may be going down drastically. Apart from careless blunders by 5 Dans, in the last week, I had two different 4K opponents not realize when I made a simple seki and actually play it out, losing themselves many points in the process. That is not exactly prowess in reading. ilan

--This is very true. Western Go player are more influenced by Japanese Go style, thanks to their effects trying to introduce this game to the world in the past century. Korean Go player are more influenced by ancient Chinese Go style, which always emphasizes on fighting. It is also true that the Korean Pro Go players, as well some Chinese Pro Go players, are to certain extend good fighters. In China, it is well-known that high Dan amateur players are normally very strong in fighting. One of the top Chinese Pro player, Gu Li, is called a "Professional Amateur player" simply because he is good and always in favor of fightings. -- Mark.SG