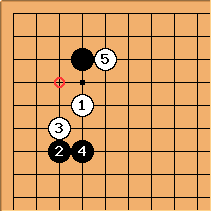 Abydos1: This sequence was played against me in a recent game and I wasn't sure what the best way to respond was (bottom left white 4-4, top right black 3-4 for whole board situation); I played the outside hane as follows since any fighting inside looks rough (as does trying to live in the corner). I also thought about playing

at some point in the sequence but wasn't sure when was best... 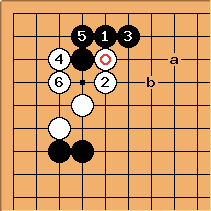 I chose to approach the bottom left 4-4 in an attempt to make the 2 stone wall work for me (I ended up sacrificing it shortly thereafter because it was too heavy); although in hindsight a seems like an important point for black on the top. I wasn't entirely happy with the sequence because the two stone wall ends up odd without a follow up move but the top isn't entirely happy either.

Herman: I think your choice of outside hane is quite reasonable. After

spending another move at the top is important here, as white is still weak. I think that instead of a, the more severe b would be appropriate. Anyway, The 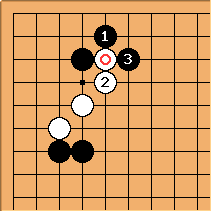