This page will collect common overplays and the correct responses to them.

Justin: I've been playing on Dashn lately and am trying to adjust to the Dashn Style. At least in my skill range (around 5 kyu), overplay seems to be the rule rather than the exception. One overplay I've seen several times is shown below: 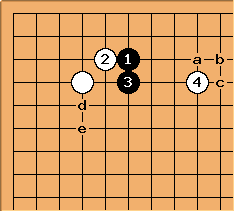 can also be at a, b, or c. My instinct tells me to play d in response, but I'm never quite sure how to follow it up. Are there common sequences that happen in this situation?

dnerra: I agree with the sequence given by Andre below, but I'd like to make a general comment: Don't expect too much punishing when your opponent makes an overplay/deviates from joseki/... As you can see, this sequence even turns up in professional games, so it seems playable under specific circumstances. Otherwise, your opponent has omitted a large move at e and you benefit from that by taking the large point of d. But that's it. If you continue expecting your opponent's position to collapse, you will probably make a worse overplay yourself soon, and then you will have the problems.

Same goes for joseki "mistakes". Most joseki deviations give just a very little benefit to the other side. So be patient! Your opponent will make more than one mistake during the game, you need not win just due to the first one! (But of course, if you can read out (or think you can read out...) that it can be punished, then don't miss the opportunity to gain and play sharply.) 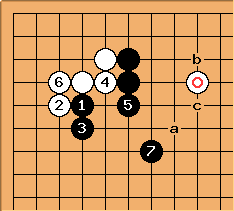 Andre Engels: This is a question that has been discussed before on Sensei's Library (see BQM377). According to a database search, the sequence to the left is the common follow-up for professionals, with the position of

quite variable - a or (when the pincer is at b) c have also been played. 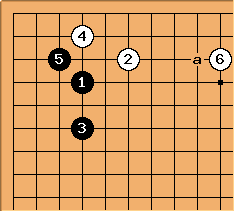 Icepick: The normal followup for this joseki is for White to extend to a. Kogo claims

is an overplay that can be punished as follows: 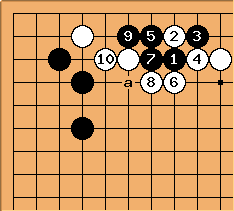 After Black 11 at a, the Kogo variation indicates that the three white stones are lost and ends.

Fhayashi: Can someone put up the continuation? It seems to me that White can push through under 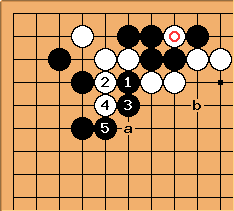 unkx80: Say White tries to push through. Up to

, I would like to pose two questions. 1) Can White cut at a? 2) Can White win the capturing race at the top? Note that Black has at least one eye by capturing

Fhayashi: Looks to me White needs b to make it work.

War Eagle: How about this sequence for a potential overplay? As White, I made a simple two-space extension on Black's side of the board, and this is the attack I got. Black threatens to run out to the middle, splitting the white stones, or link underneath on either side. Seems like Black will obtain something. In the game

was at a, but now b seems stronger.

Any comments on the moves so far or a better white defense? I do not remember the exact configuration of the corners, except that Black had claimed them.

Alex Weldon: Seems to me that

is the problem. Nobi is a good response to contact sometimes, but here I think you have to play hane either at

or c. Note that c will connect unconditionally, but I'm not sure whether you'll get enough eyespace by connecting under, and it gives Black too much influence anyway. I'd play

. To paraphrase the immortal words of Jim Bowen[1], "Just look what he could have played":

Here is the sequel:

The real point is that I am not convinced Black is guilty of overplay here, anyway, at least in principle. Since he had support on both sides of your two-space extension, an attack was not unreasonable. However, you could have answered it better with a hane, as Alex Weldon suggested, while Black could have played a better attack to begin with, such as:

There could be material here for a new page called There Is A Fine Line Between Severe And Overplay. You thought it was unreasonable for Black to attack your two-space extension, while I thought it was a justified strategy in this position, though poorly executed tactically. Anyway, learning to distinguish between overplays and severe moves must be a crucial judgement skill and one that I, for one, need to work on.

taiji: this line of play may prove black 1 to be an overplay, depending on the whole board situation. this sequence can be found in in a 1960s Honinbo game between Takagawa Shukaku (W) and Fujisawa Shuko (B). -taiji

Andrew Grant: In fact there is no need for Black to hane on both sides, and he should not do so, as the second hane with its answer favours White. The correct sequence is to jump out with

BTW, according to Otake Hideo, if you can see this tesuji in an actual game as opposed to a problem you're at least a shodan. (This assumes you haven't been shown it before, of course). Make of this what you will.

War Eagle: First thanks for the analysis and answers. I learned several things from the game, and more from this analysis. Second, I was unsure if this was an overplay or not, so I posed the question. Perhaps others will learn something.

I knew to expect an attack on my sole group on 'his' side of the board, not just this Dashnstyle attack. When I read that page, I remembered this game, and this question clicked.

Lastly my book library is rather poor. Which books would cover the material in the figure "A better way for Black to attack?"? At my level I rarely see such play. Perhaps, a middle game book like Attack and Defense the book? Or a problem book?

Tamsin: I can't recall precisely where I first saw the placement at

, but I can say that it is a common theme in attacking the two-space extension on the third line, and I do recall reading in Charles's

Shape Up about various lines in which the placement is preceded by a cap. The general point that I think you should note is that it is not unreasonable to attack a two-space extension when you have support on the sides. There are many formations, like the two-space extension, that are safe in relatively empty space, but which require strengthening when the opponent becomes strong in the area. The true dashn style is to attack regardless of such considerations! <grins> What can I say about that other than when playing against experienced opponents, even unreasonable attacks can be dangerous unless you keep a cool head and think things through. Often, I believe, the trick is to consider the global situation and not to allow yourself to be overwhelmed by local considerations. That is, you can often let your opponent think he's getting his way (locally) when really you're exposing the shortcomings of his unreasonable play by gaining elsewhere. Hope that helps!

Absorbed: I am told that the move below is an overplay, but I am unsure how it could be punished--could someone kindly enlighten me? 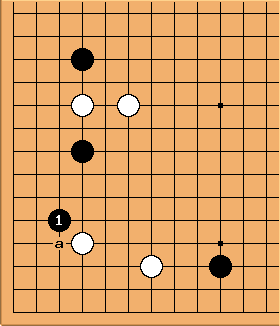 mafutrct: How about white A?

is then too close to a very strong white position. Black also lost the possibility of a 3-3 invasion.

[1] UK deshis will know who Jim Bowen is already. For everybody else, he was the host of the popular darts-themed gameshow "Bullseye". He was notorious for his crappy catchphrases, e.g., "super", "smashing", "marvellous", and for saying to losing competitors, "Just look at what you could have won".