Miai in the fuseki statistical analysis

Moved from Miai in the fuseki 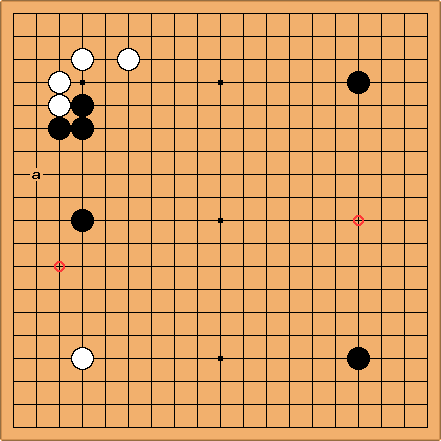 Update - When I wrote the comments on miai in the fuseki I was basing it on materials in Otake Hideos Fuseki Theory which was published at the end of 1986. The final sentence turns out to be rather fateful since it seems the pros have meanwhile demonstrated that the left and right side here are not miai!

Analyzing this variation using the program Kombilo and the game collection from the Go Games on Disk CD (January 2002 update) the following history of the variation can be charted:

The variation does not appear in the collection at all in the period 1996-2000. It was played once in May 2001 but this appears to have been an isolated incident.

It appears from this that the white play on the right side was superior to the alternative choice on the left. However, once White played on the right, Black could not do better than equal results. Since it is Black that initiates this line, the disappearance from top level professional Go after 1995 seems to reflect Black's dissatisfaction with his results.

One last interesting point. The left and right were officially viewed as miai from the first (hence Otake's inclusion of it as an example of miai in a book for amateurs written in 1986!). However, the choices made between the left and right were not balanced in actual play. The professionals first concentrated on splitting the right side. The play on the left came later (because the right side failed to yield an advantage?). Of the 16 games where White played on the left, 14 were played in the 90's and 2 were played in 1995 shortly before the variation fell out of favor.

Andre Engels: Using the database from MasterGo, I interestingly get to somewhat different results:

The 'first game' is not in that database, the first game in the database with the position is from 1985.

From 106 games, the right is played 61 times, the left 32 times. There is a third somewhat important move, namely a with 6 occurences. Unlike the GoGoD database, MasterGo shows the left (white wins 41%) not to be worse than the right (43%) in winning percentage, although in number of times played the datasets are similar. The other moves score lower (a scores 17%, the other moves combined 14%).

Charles I don't have Master Go to check; but GoGod has quite a high proportion of Korean games in the hits. Geography often matters, in opening fashions.