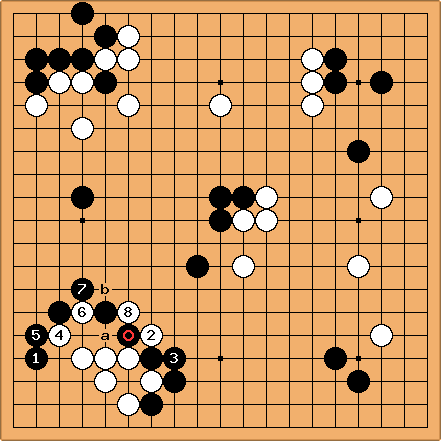 unkx80: I made the claim that Black 51 might be a mistake. I might be proven wrong, but I still think that this makes interesting discussion. =)

Actually what I was thinking is the sequence up to

, where the marked stone gets captured by snapback and White breaks out of Black's enclosure. If Black does not play at

would have lost its meaning.

What do the others think?

Charles Matthews This is the main sequence around here, but one has to worry about the timing[1].

is locally a bad play, and there is the question of when to play at

Dave I have to thank HolIgor for at least raising the possibility that 51 was a hamete but actually it was just a blunder :-( 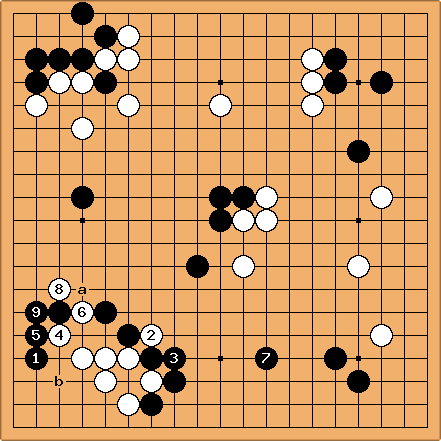 Dieter: I think that Black must indeed give up the idea of enclosing and build a moyo with

. I see this variation, where a and b are miai.

That was my first idea. However, if you make a positional judgment after this sequence, Black is not very well off. Also after White a Black b, the corner is not completely safe. 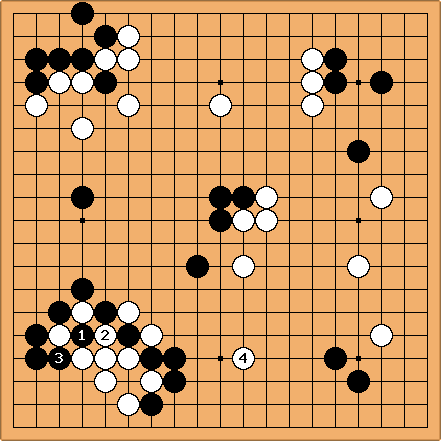 Is this what Black has to fear ?

Charles Matthews Black looks a bit thin on the right of White's ponnuki, but that seems superficial. Consider that Black is very thick to the left. So maybe the order of moves is questionable.

Dave After Charles played 52 and the trap became evident, I thought that Black could not afford to give up the outside just for the corner. 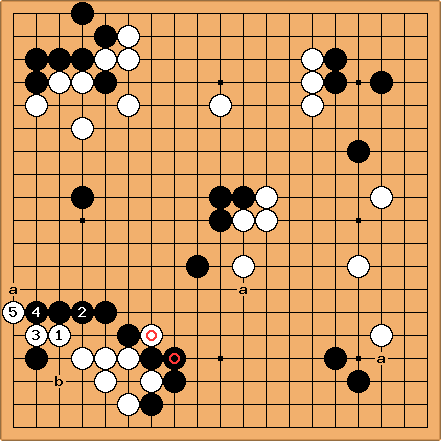 exchange of stones strengthens Black. Can Black give up the corner and hold things together on the outside? Through

seems to be a natural progression. At this point Black has to prioritize the points marked a among others in coming up with a strategy from here. I am not sure what is best next.

Dieter: To my fallible eyes, the way White has mapped out her moyo and territory looks much more natural than Black's constructive approach. In particular Black's left side moyo has a wide gap facing white influence. 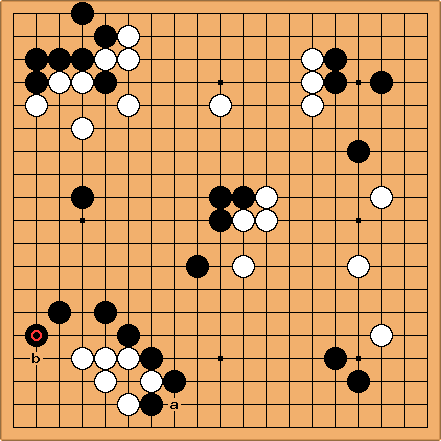 Charles Matthews Should Black have held back one line, playing

here? In that case White can start the ko at a, but with fewer local threats. If White answers at b Black ought to be happy.

unkx80: Thanks all for all the comments. I like the comment from Charles above, which I think is also a indirect way of protecting the cut at a because 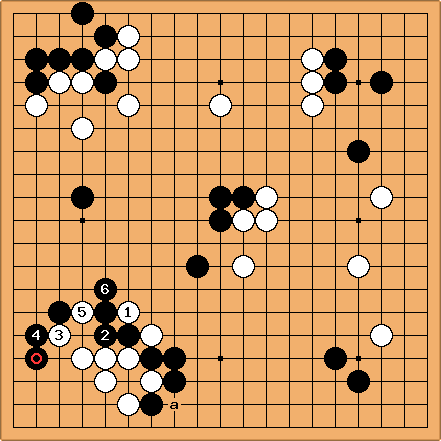 Charles Matthews This is an alternative sequence for White to consider. After

it may seem inconclusive. But recall that if White first starts the ko by playing at a, each of these is a local ko threat, and

seems to promise White even more threats round here.