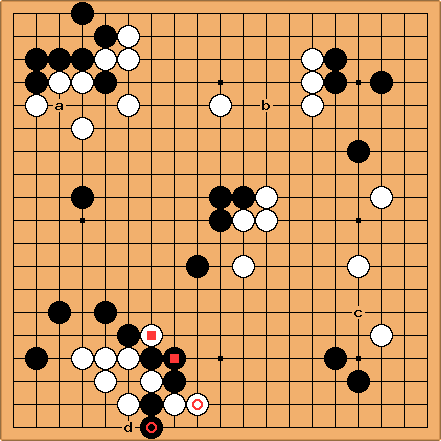 In the Black Sheep Rengo 2003 Black's slide into the lower left corner provoked a difficult continuation, as White strove to make shinogi in some advantageous way.

The exchange of the square-marked stones is the sort of thing White might like to avoid, but once it is played White should try to make use of it by tactics of some kind against the three black stones. White did start the ko on the lower edge.

Black reacted by adding the circle-marked stone - not a good idea. This might provide a local ko threat, if played during the ko fight, but if White wins the ko White will profit more.

In fact we should assume that White will win the ko, because White must live somehow. It seems that Black ought to answer any of White's threats to break through into the left side, Black's largest potential area. Black has threats elsewhere on the board, in the areas of a, b and c at least.

It isn't easy to comment on this, and anyway in a rengo analysing ko fights 30 plays deep (as one should here) is very much a theoretical exercise. 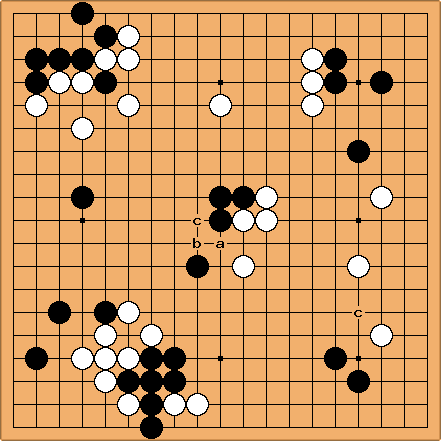 It is difficult to do more than imagine a result, but suppose White breaks through into the centre when Black ignores a threat. This could be a tough situation for White (there will be some extra stones on the board). The reason is that Black's central group can be used to attack White, finally. (So many plays in this game using influence just to take territory.)

What White really hopes for is a way of making the aji of the cut in the centre work some day (White a, Black b, White c). But this is surely not possible while White is still weak in the lower left.