Important notice: if you're a beginner reading this page and don't understand something, ask please. Just edit the page. You will be answered.

I have a strange idea. Maybe that comes under the influence of the movie Memento[1]. It is rather an interesting story about a guy who had a peculiar condition. After an accident he could not convert short term memory into long term memory, so he forgot everything in about 10 minutes, though he remembered well everything before the accident. The movie is shown backwards in time, so the spectator does not remember what happened before too just as the main character.

The idea is intended for genuine beginners. I know that quite often beginners have no idea what to do with the next move. Partly, this is because they have no idea about the long term consequences of their moves while they understand that there are some. I propose to show them a game from the end.

Question:I Think the Idea is great, but isnt there maybe a proper 9x9 Game for your proposal (I have to teach some children soon and would like to test it)

First, we start from the final position [2] and explain why there is no value to the moves, explain that putting a stone in opponent's territory forcing a reply has zero value and is considered bad manners, while putting a dead stone (without forcing a reply) is a loss of a point. We explain also what groups on the board are dead and then remove them, and score the game. The next step would be to rewind it ten moves back when there are some values to the moves yet and show how the late yose is played, i.e. how the opponents territory is reduced by making threats. Sente and gote come naturally.

Then rewind it back ten moves more and continue rewinding it until we come to a fight. We can show importance of the stones positioned earlier and analyse the fight. Slowly we will end up in the fuseki.

I have a game that is suitable. It was a fast game on IGS and it is full of stupid mistakes at all stages, so there could be a lot of comments and problems. There are dead groups in the final position (but no seki), there was a ko-fight in the middle of the game, the score is close, there is a lot of life and death, so it is fun. However, as almost always in my games, it was my opponent who made most of the mistakes in the chuban and my fuseki was just awful, so White was behind all the time but managed to win by 0.5 point.

I want some feedback on the idea. What would the senseis say? Is it worthwhile? I understand that the feedback from the genuine beginners is impossible for obvious reasons. But could that kind of read be interesting for them? 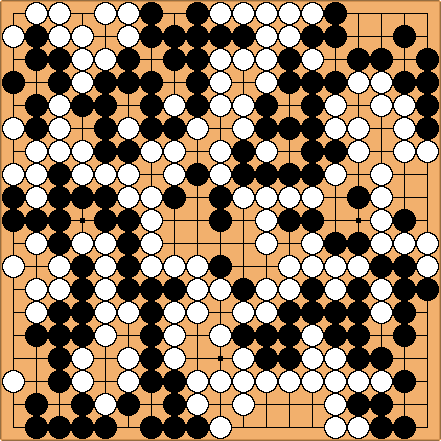 First, we have to read the position correctly and determine which stones on the board are dead. Usually the players have to agree on each of the groups. Usually this proceeds smoothly, disputes are rare. The next diagram shows dead stones, as

. In the real-life game they are removed from the board and added to the prisoners. 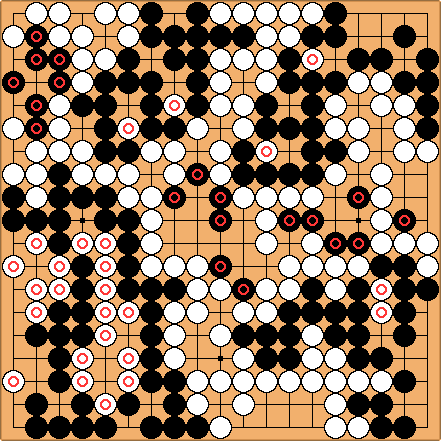 If you'd like the scoring procedure explained go to PGB Scoring.

If you know how to score the game, skip to PGB Why There Is No Useful Move Left. This page takes you one step backward to the point when both opponents passed. This is very important moment of the game. The game should be finished before scoring.

comment: can you link to a downloadable sgf file for this game - I think that would help w/following your deconstruction - btw - great idea doing this!...;-) --ChrisA

As a beginner with 33 days experience (yes, consecutive :-) ), I can say that this fascinating presentation is of relevance even to those to whom it was originally intended. Actually, I have only looked at the first few (last few?) pages, but hope to be a better player by the time I get nearer the start of the game. - LR

[2] This idea was developed, or at least used, by Frank Jansen (6d Eur) in study groups (certainly not beginners) for endgame studies: take a professional game with a close endgame (1/2, 1, 2 points) and try to understand why they played their way. This is under the assumption that profs seldom make endgame mistakes.