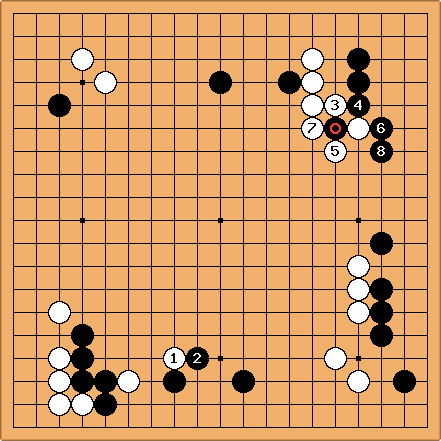 In response to the marked black stone White played 1, apparently setting up a ladder breaker. Black replied with 2. Why? What was Cho afraid of? Would you reply?

DaveSigaty: What ladder do you mean? I think that if Black does not reply, White will have good opportunities to split Black's position at the bottom and get some return from the wall on the right. When Black replies at 2, the wall on the right continues to have limited scope.

HolIgor: Answering Dave's question I added moves 3-8. White 1 is a ladder breaker. Black is forced to give a ponnuki connecting underneath. Naturally, the ladder breaker is played before the ladder situation arises. 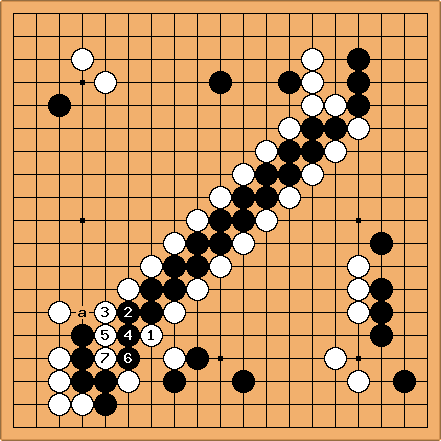 DaveSigaty: That is quite a ladder :-) At the same time, since Black a would have broken the ladder in sente, Black must have been satisfied with the continuation in the upper right?

HolIgor: I did not even think about a. Nice, Dave

Anonymous: (According to the newspaper) Cho was satisfied with this situation because ladder breaker

at the first diagram was a forced bad move. 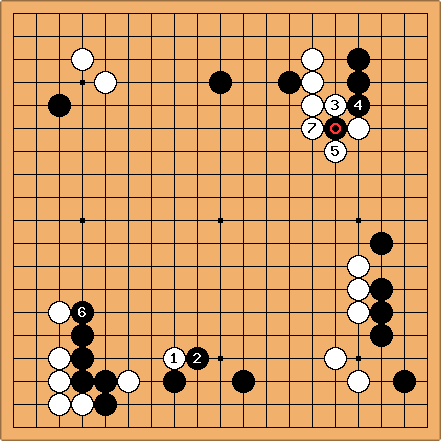 After this Black seals White in the lower left corner but the same thing happens in the upper right as well. The question is if Black can finish lower left in sente. Otherwise the top right looks very weak. Perhaps this is why Cho did not opt for 6. Does the good player take such options in consideration at every move? 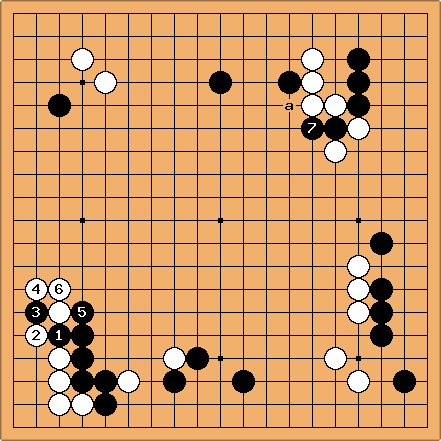 Anonymous: You are right. (According to the newspaper) this exchange was what the professional players in analysis room suggested in this situation. Song agreed with it (i.e. with

, he would have played this way) , since white could've got some points at lower left corner and by 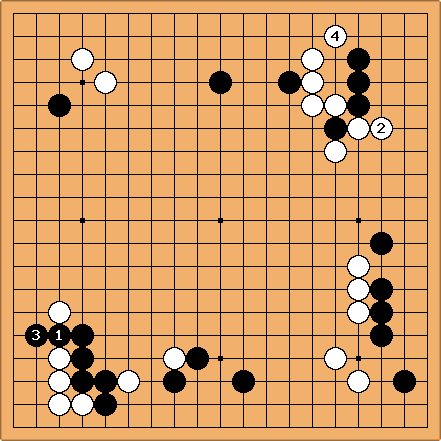 But Cho didn't agree with this suggestion, since Song might have not replied to 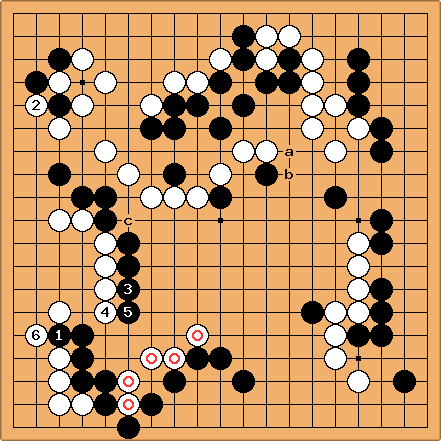 The players were entertaining themselves with a ko in the upper left corner. It is logical to assume that Black 1 was intended as a ko-threat. Song captured the ko in reply. The following moves are puzzling as well. Black played oshi twice and White connected at 6. Do we have to believe that Cho played a ko-threat that was not a ko-threat? Did he make a mistake? Did he know that it was not a ko-threat, but wanted to scare a young one?

Dieter: My guess is that the ko was not the most important thing on the board. It was auxiliary to the safety of Black's center group. So, when White captures the ko, Black runs his group into safety, and because of the threat he played it was sente. Still, it is a guess.

Anonymous: According to the newspaper,

was intended to block marked white stones, in exchange for giving up ko. It turned out that this was a mistake anyway, since a for

would've been much better for attacking upper (and indirectly lower) right white stones, whereas in actual game, black still had a weak point at c.