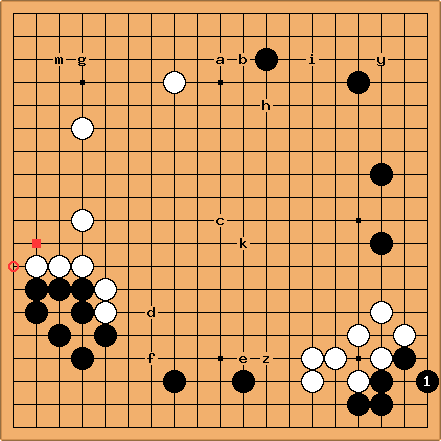 At this point in my game, I had just traded, attacked, finished attacking the bottom right; and Black has just given me sente. I played the one-point jump at z, showing how low my skill is under pressure, and immediately regretted it, as it's obviously too small. Thing is, my thought process was "ah, I have just gained lots of influence! I must now utilise it immediately, before my opponent takes it away!

Offhand, I see my other options as securing more top territory with a or b. (Too small?) Playing super-optimistic and taking tengen (!) at c!

Or maybe a reduction attempt at d, which, depending on the response, might lead me to follow up at e or f...

Then there's my insane invasion at y, based on the principle that Black already has ridiculous influence in that region, why don't I just add a little territory while I'm there, if I can do it in sente?

I know these plans are all sub-optimal at best, please tell:

a) which plan was the best among the above?
b) Something better than what I came up with...

Stefan: The white group in the lower right is very strong, so there is indeed no need to continue playing here. Since there isn't anything obvious to attack, my one-second move is y in the diagram. Typically it's good to take this territory away from Black if he's extended like this on both sides: no matter what side he blocks, it's bound to leave him a little overconcentrated. Another good option seems to be reinforcing your own top left (like one point above the star point there). In any event this should come before your a or b option - if not White will invade, a bit like the described y invasion.

Let's see what the dans have to say about both our ideas, shall we? :-)

Sorry, Stef, my original a and b were a mistype... put them on the second instead of third, moron that I am... bet you suspected something wrong when you saw that, huh? I also previously had two points e's, hilarious...

dnerra: I would suggest taking some cash with g. If Black enters your corner there, your moyo will lack a sufficient base, it's a huge point. (Black might still be able to live in the corner after White g, but only on a small scale which you don't mind.)

Another approach is to continue the framework contest with a move at h, that's where the junction line between the two big frameworks is. If Black replies locally, say at i, you can continue to build your framework, e.g. with k. Playing on the lower side is not so effective, because both Black and White have very solid positions there. If you play d, Black can play tenuki and for example play on the hoshi at the upper edge. Then your framework has shrunk, while his was stabilized.

unkx80: I favour g or m, especially for Jasonred's level. It's a big point in itself, and I guess it may be also the easiest one to handle.

Bill: g is the first place I thought of. However, I also think that that makes it too easy for Black. White is playing catch-up, I think. So I vote for h, which is more dynamic. (Better haengma?) Black will probably go into the top left corner. Then White hems him in with sente and seeks complications in Black's top right framework.

DaveSigaty: I agree that g grabs the eye. However, Black's lower left is a solid 30+ points. White g loosely encloses a similar amount of territory on the left side and gives sente back to Black. Basically if Black just splits the center with White, he can win by the amount of territory he makes in the upper right. Therefore, I think Bill's idea to take the initiative in the center is the best chance that White has here.

Dave: What! You mean I have to read the whole page now? :-O

Charles Matthews White at a is the play here with some sting in it. I don't think White has a real chance in a territory contest now; therefore White should play in such a way as to set up stronger invasions at i or y. Since Black has no weak group, trying for central territory shouldn't work.

Bill: Maybe a bigger question mark is, "How did White lose so much ground to start with?" How about some diagrams showing the play up to this point?
Ah! If each player has lost the same number of stones, this was a three-stone game, wasn't it?

Jan: I agree. The lower left corner doesn't look like joseki to me...

Spot on! I was playing catch up on three stones: catch up was hard up to here. Maybe I was silly to trade influence for territory on the bottom right, especially with that many stones, but... I thought it combined territory reduction with making influence, so, not too horrible? Maybe the stones would have been better used expanding from the top left though?

Bill: The bottom right looks OK in itself. But you have not really gained on Black yet.

My thought here was that if I could make just one more significant gain in sente, I would have the game in the bag (as much as a low kyu player can have a game in the bag...

Bill: That is unlikely to be good enough. At this point your aim should be to make the game close. Sakata talks about the power of prayer. :-)

Jasonred : Bill, dude, this is just for discussion purposes. I won the game (I'm not sure I deserved to, though...) I'm just discussing here what I should have done :}

How about a little explanation why I'm still far from catching up? I thought that at this point in the game, there are lots of really big points to play, so if my opponent wastes a move or two on unimportant points, I could take the lead?

For anyone interested in what actually happened, note that I am weak, and my opponent was at least three stones weaker... so, my opponent played on the circled point, and instead of sealing off, I played on the square... inviting my opponent to stretch farther and farther up, and me replying one point north each time. Why??? I thought that it was a reasonable trick play to give up 10 or so points of territory in exchange for securing that area, being able to tenuki, umm, I think it was twice? etc etc.

Moral of the story? Save such small keshi for yose?

So... moving at d or f doesn't threaten splitting Black's bottom left from his bottom middle? Sigh... Maybe for the level of the players in this game, h, hopefully semi-sente, then g...

Charles Matthews I think Jasonred is grasping here for an idea like 'open-ended' play, and its opposite. Semi-sente has been called almost sente here. It is probably true that in handicap play as White one should be looking in principle to get into exchanges of open-ended plays, reasoning that in a mutual damage contest White will apply better counting, reading and psychological state. White at d is a focal point and therefore a reasonable candidate move to consider. Since Black has a low, solid position on the lower side, White's follow-up isn't going to be enormous. That's why attention to the top side makes more sense, in comparison.