Alex Weldon (13k* IGS): Here's a situation from a game I played on IGS today. White has made two early invasions into Black's framework, then took the big point in the middle of the bottom side to start one of his own. Black responded with the marked kakari. How should White answer? 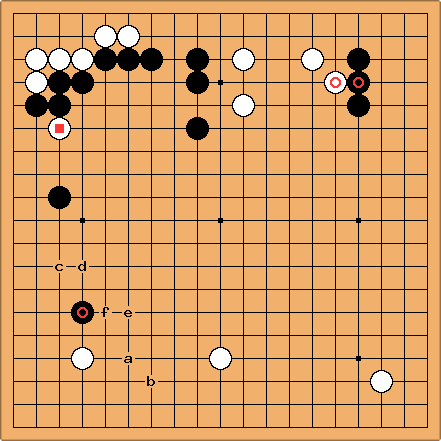 I considered moves at a, b, c and d. I thought long and hard, but as is typical for players of my level, I might have overestimated the size of his potential territory on the left, and decided that extending along the bottom and letting him strengthen his moyo was a bad idea. Instead, I played the low pincer "c", hoping to eventually make use of the squared white stone.

Charles Matthews White a is the normal idea - the immediate pincer/invasion at c seems negative.

Alex Weldon: What worried me about a was that with White a, Black e, Black's left side moyo looks huge. If a is good, how to respond to Black e?

Charles A framework isn't the same as territory. Black would be relying on just one framework, plus a small area top right. If a framework contest is the issue then White should play at f. But see variations below.[1]

Bill: I agree with Charles. Black is better in the top right (the exchange of marked stones is not good for White), but is overconcentrated in the top left. This is no time for White to panic. The one-space response is fine.

The play at c ended up sort of working, as in the sequence shown below: 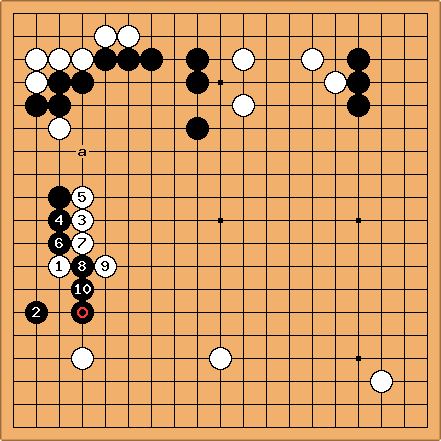 (White 11 at a) This is something like what I had in mind when I played the pincer originally, so I was satisfied, and indeed, I went on to make use of the center thickness I built up, and, eventually, to win the game. However, reviewing the game, I feel that maybe a pincer (or maybe this particular pincer; high pincer better?) wasn't the best move in the situation. It did occur to me that he might answer the shoulder hit 3 at 5, instead of 4, but I figured that I could then get compensation by attacking the original kakari stone (marked) and 2.

Charles Not really a good result for White: Black is now solid, White's new group is heavy. White has less to hope for in the lower left.

Hopefully, some stronger player can offer some insight in the proper way to play in this situation. 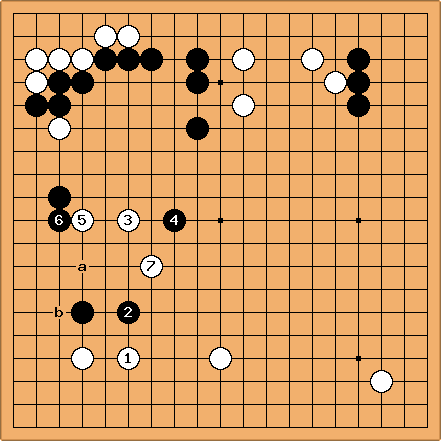 In this position White can perhaps try White 3 as reduction play. It could turn out to be too deep; but after 4, 5 and 6 here White at 7 (or at a aiming at b) has some merit. 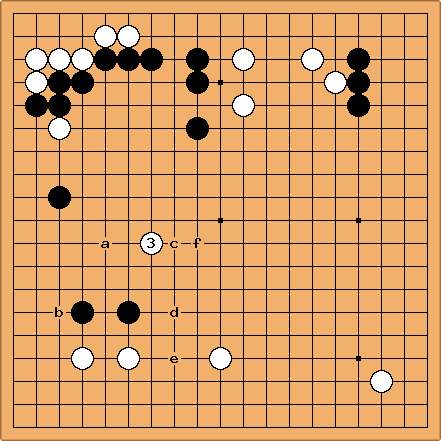 A more relaxed feeling is White 3 here: if Black makes the reply at a, for example, that can look passive if White next plays at b.

Bill: I think that W c is playable. Then White does not have to worry about B d, threatening e and f.

Anyway, one can improve by going along half-way with the opponent's plan, taking a few pickings before contesting the rest.

Alex Weldon: Thanks. The variations given here make sense. I was worried about giving Black 5th or 6th line territory on the left, but I guess that after the one space extension (taking some fourth line territory of his own), White's reduction on the left side can likely build up a little strength to get something going in the bottom right.