NhanHo? : Hi. I'm 5k on KGS. Yesterday, after review one of my games , a dan player show me the following diagram : 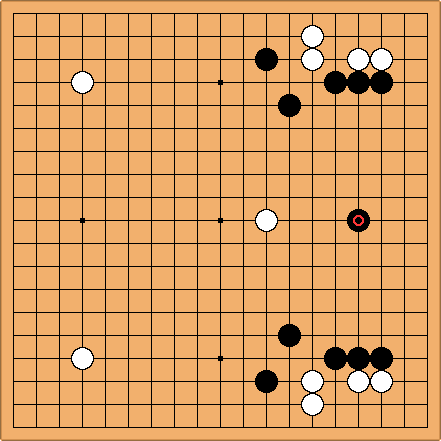 He told me that the game is even , up to now , and both sides have not made any mistakes. I disagree, although the two sides have played two josekis, it is disadvantageous for white. The joseki work well with the marked Black stone , building a huge moyo. Is he wrong? Do I overestimate the value of big moyo?

Velobici: (Note: the following is from memory.) This situation was covered by My Yilun Yang in one of his workshop lectures in Gaithersburg Maryland a few years ago. White has severely limited the ability of Black to expand his moyo. At the same time, White has two solid corners and the ability to develop in two more. While it appears to favor Black at the moment, this position does not favor Black over time. White will continue to develop and do so more easily than Black. Alternatively, we could say that Black has more cash (territory) in the bank, but little additional earning power. White has some cash in the bank as well, but White has significantly greater earning power. White's efforts to convert that earning power into cash will be a major focus of this game.

MrTenuki: Since each side has 11 stones, I'm assuming that it's black's turn now. What's a good continuation for both sides if black decides to cap the white stone by playing at tengen?

unkx80: This position was posed as problem 53 in the book 武宫流三连星序盘至中盘战术 (ISBN: 7-80502-322-01, September 1989). In there, Takemiya says that White played the appropriate erasure move, and the text suggests that the position is even (although it was not explicitly stated). There are two possible responses, both of these are considered correct. 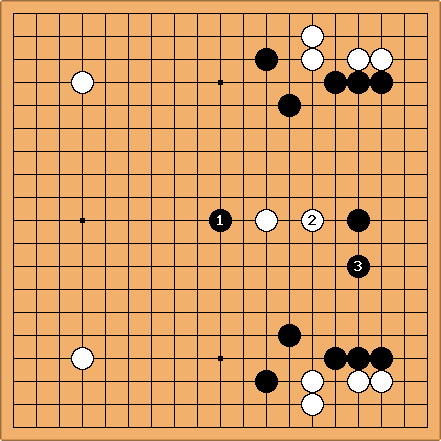 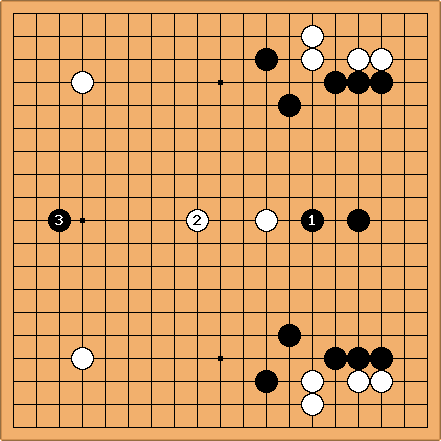 Bill: Moi, I prefer Black. (Not that that means anything. ;))

Tapir: Should not the positional judgement depend on the level of play? E.g. in the defend diagram black is ahead in territory and has played a wedge on the left, but the white center stones which might be strong in pro play, won't be used accordingly by most amateurs (at least those in kyu ranges like me :) In the attack diagram black still has a lot of territory and white has a weak group in the center, isn't each move in the upcoming fight more important than the score estimate before? how many points difference? (even like some say, favorable for white like yilun yang says, or favorable for black as bill said?)

Bill: The value of a position does not depend upon the level of play. The abilities of the players may affect the chances of winning, however. 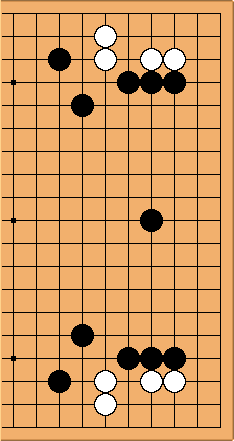 Bill: A GoBase search turns up only two cases of this half board position. And Black won both, once by resignation, once by 12.5 pts. 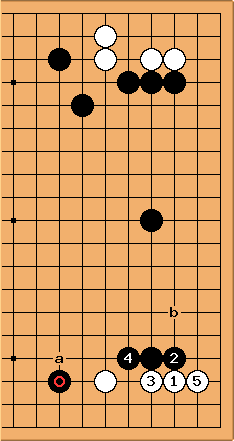 Bill: The most popular White response to

seems eminently sensible, given Black's framework. Other frequent alternatives to

were a and b. All of this suggests that the pros are not fond of allowing Black to build such an impressive framework as in the top diagram. 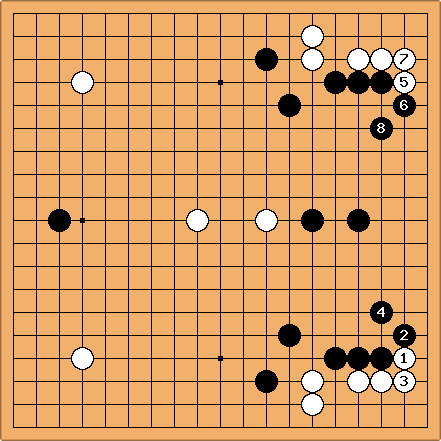 Dieter: Also, in case Black fortifies the moyo, yielding the central influence, White can assume the endgame sequences up to

. White now has about 20 points as a sum of both corners, against Black's 45+ on the side. Left and center are rate influenced by White, and the Black keimas can be cut.

The above is White's endgame, because

is not sente. After

tenuki, a and b are miai for life.

If this were sente for Black, then White's corners would sum up to only about 6 points instead of 20 and Black's side would be 8 points bigger. A lead of 50 points in territory would indeed not be balanced by some influence on the rest of the board.

Such are the implications of Life and death or endgame arguments on positional judgment.

Bill: Two things about this line of reasoning. First, playing from the corner instead of dealing otherwise with Black's framework is relatively rare. Second, the hane-tsugi may not be best for Black. 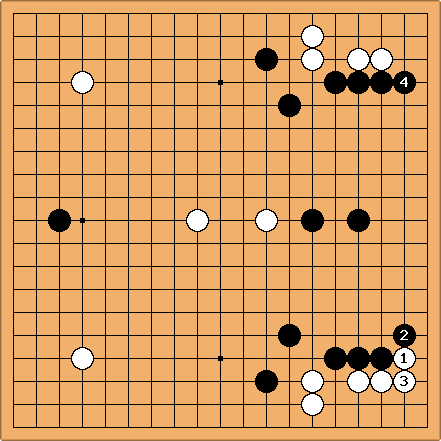 Bill: Now, this is not to suggest that this play is correct so early in the game, but I think that it is best to consider these corners miai.

NhanHo?: Why would White's corners sum up to only about 6 points , and Black's side would be 8 points bigger if it was sente for Black ?

is also Black's sente. Still later, when the dame are filled, White must again reinforce, at a for example. This leaves the three circled territory points.

The four circled points on the side mark Black's points he does not make in variation where White gets to play first.

If this sequence is Black's sente, we can take this result into account when doing the positional judgment of the initial diagram. But it isn't: White has played tenuki once, which by symmetry gives White two extra moves in the whole board situation.

NhanHo?: Got it , thank for your helps .

ChrisSchack: Wouldn't a B play at a after the

Dieter: Yes. And b still kills. This must be reviewed. Actually