Alex Weldon: So, I played an unrated even game against a 2d on KGS today. I've been experimenting with diagonal fuseki lately. Five moves into the game, the position looked like this: 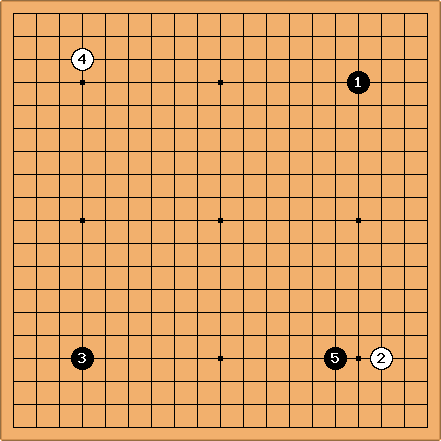 At this point, we had the following conversation.

Opponent: "Do me a favour, and think about your moves."

Opponent: "Clearly, you're not."

Me: "What, you think this fuseki is so bad for Black?"

Me: "I would disagree." (Dave: You definitely missed an opportunity here. The correct reply is always, "Why do you think so?" :-)

dnerra: I disagree, too. I don't think there is much more to say at this point.

Bill: Your opponent is not only a rude 7-letter word, he has his head up himself. ;-)

LoP: I think your opponent was not refering to the position on the board. It's likely that he said this because you played pretty fast. For move 3 you spent 2s, then he used almost 25s for 4 and you answered within 2s again with the approach. Of course this is no reason at all to complain.

Rather than support his opinion, he shut up after that, and we played. I lost, but I would blame later mistakes, and the fact that he's two ranks stronger, not the fuseki. I generally consider myself pretty strong at fuseki though this was, as I said, an experiment. The second diagram shows the moves up to 16.

Bob McGuigan: Chapter 3 of Kajiwara's book "Direction of Play" has a lot to say about the relationship between

, not favorable to White. In effect it seems that if anyone has a losing game after

it is probably White.

kokiri and then he repeats the sin by playing

in the same relationship to

PurpleHaze: I think your opponent is insane. 5 or a must be reasonable, if not the best, moves at this point. So what is his thesis, that 3 is a mistake? That somehow 2 "forces" black to play a parallel fuseki?

Chris Hayashida: Kajiwara's comments aside, I have seen some stronger players say make comments like "You should not play this way. It starts a fight, and I am stronger than you." Perhaps this is what the dan player meant about your playing the diagonal opening. Note that I don't agree with this way of thinking. If a fight is bad, personally, I prefer to be given reasons because of the position of stones on the board, and not because of an estimation of the strength of the players. 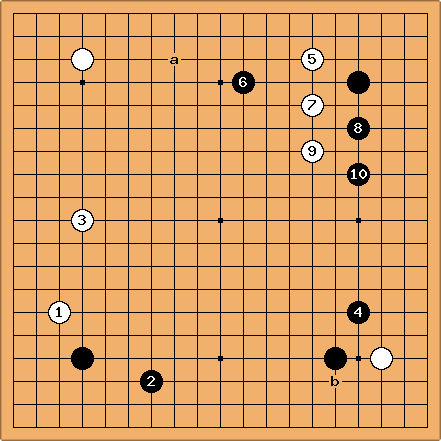 So, my question is, does Black already have a losing game? It doesn't look like it to me, so I suspect that his comment was just trash talk, but I figured I'd ask in case there's something I'm not getting.

dnerra: Unless your opponent is of professional strength, you of course do not have a losing game. I think

is the first interesting point. I would think that

pretty much asks for an approach move in the upper left, and I would happily play it.

is the next problem. With the sequence up to

, you are taking the right side. However, if you you virtually add the typical joseki in the lower right you see that the right side is open, and it is thus not so effective to make territory there. That is not to say your play with Black is bad, but your game got a little more difficult, and you should have a plan how to deal with with W b. 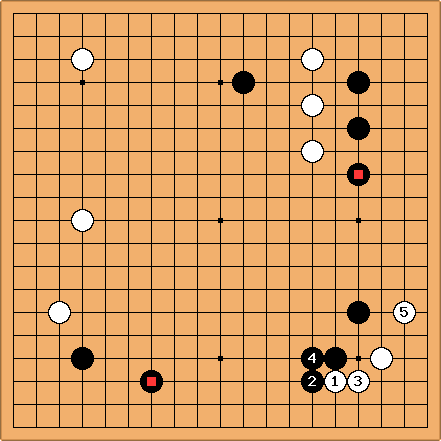 Dave: With the two marked black stones on the board you have to be thinking about answering

with the inside play at

. What did you play?

Alex Weldon: Alas, he did get sente to come back to that corner, and I did play the normal joseki, damaging my upper right, which shows why

in the previous diagram are bad, at least in combination. Would

even work? This is a question that might merit another BQM.

is another standard joseki. Although the ladder to the upper left is broken in the main line shown in joseki books the black stones facing the lower right would give Black plenty of opportunity to vary along the way. White could not just rely on the joseki books I think. 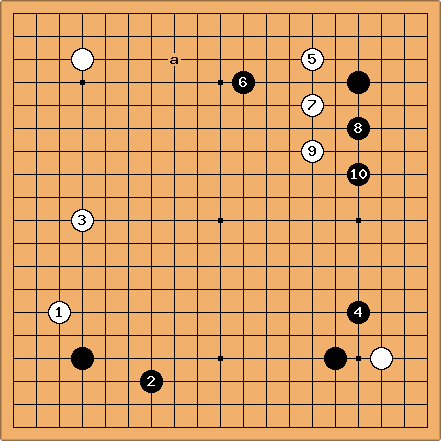 . I didn't want to just make a small knight extension and let him play around the middle of the top side, though. Maybe a one-space low pincer is better, as it makes jumping out less desireable, and I get a good result if he jumps into the corner. Alternately, choosing a different joseki in the lower right might be better. Attach inside, perhaps.

Can you elaborate on why

forces an approach move in the upper left, or at least makes it more desireable than continuing in the lower right? It seems to me that for W to make a shimari at this stage would be putting too many stones on one side of the board, so can't the approach be left for later? Also, which approach move would you choose?

dnerra: I believe the usual move for

is at a, to make a small chinese formation. It is natural since it makes invading above and below about equally hard. Now after

, I see no good move against B at b. A pincer would be overconcentrated, and anything else lets Black have an optimal extension to c. But maybe you are right that this invasion is not so urgent. A white move at b does seem very big to me, though. 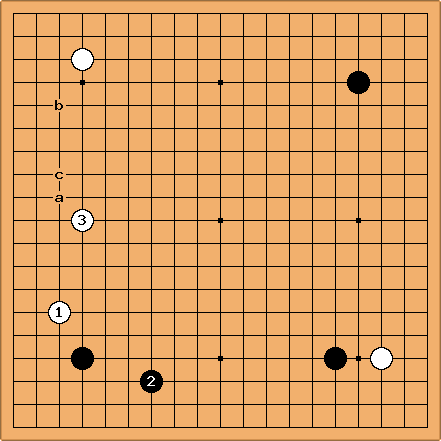 Oh... and I asked around and found out that the opponent in question, "gall," has a reputation for being an abusive jerk. It's likely that he just dislikes diagonal fuseki and decided that the correct response was to berate me, so we can safely disregard his comments.

HelcioAlexandre It just happen that I am memorizing a game with a very similar fuseki. It's a game between Shimamura and GoSeigen. Your moves,

are Shimamura's favorite fuseki. I have the feeling that a is better than

(a was Shimamura choice in that game). 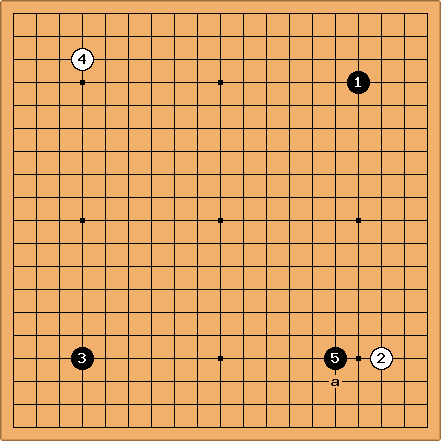 HelcioAlexandre In diagram 2 (the game continuation), I would have played keima shimari (a) or ogeima shimari instead of

that was played. In my opinion, closing the shimari is slight better than making a kakari on a hoshi stone. In the final position of diagram 2, I feel that white is already slight better because his stones seems to have a better relationship. 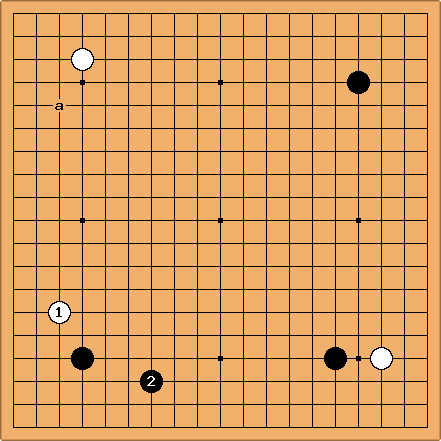 Chris Hayashida; I edited this page and added more diagrams to try and understand the flow of the conversation. There were three letter as on the board! If there are any mistakes in the diagrams or comments, they are mine. Hopefully someone will find this useful. 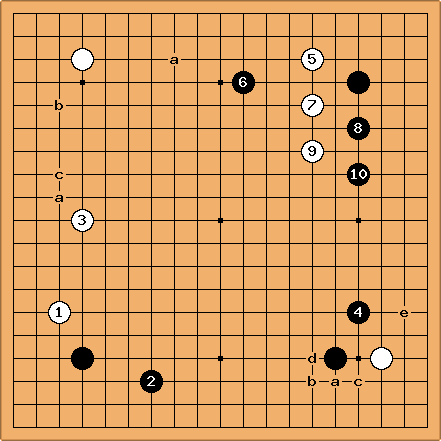