Recently I violated the "Don't push on the fourth line" saying in the following situation, thinking I was profiting at least as much as my opponent. Was this a bad idea? My positional judgement skills aren't good enough for me to tell if this was better for me, it was just my best guess. Shown is the push, then the endgame position. The results was a loss for me by 3.5 with komi, so if komi wasn't there, I would have won. --BlueWyvern 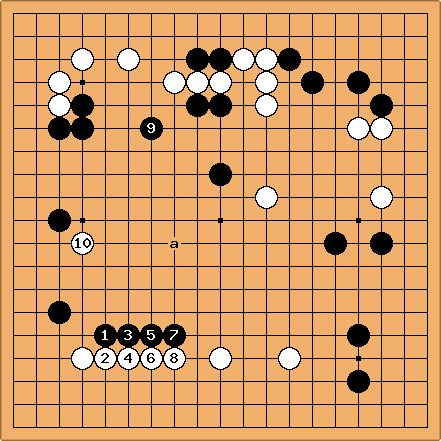 I won't say that Black 1 to 7 is totally unplayable, it's actually quite an interesting idea, but I definitely don't recommend this kind of play. It hands more than 20 points of definite territory to White, but the amount of territory Black can make on the left is unclear.

It is not easy to capture a white invasion of the black moyo. I can tell that you succeeded, but probably White had made some mistakes in the process. :-)

DaveSigaty: Objectively I agree with unkx80. But on the other hand I think that conceiving this idea and going ahead with trying to implement it in the middle of a game are absolutely great! It is a pity actually that Black came up just short here. If there were any justice on the go board, you opponent would have conceded defeat purely out of admiration for your imagination :-) Well done, I say.

BillSpight: Well, I like to build walls and moyo, but I wouldn't try this. A double kakari looks too good.

But I do not want to discourage your invention and exploration. A good part of strength at go lies in seeing possibilities that others do not. Keep it up!

Small Question Mark: Where should White 10 be? I think maybe a. Or is that too deep? Too close to the wall?

Well, my thinking for this whole thing was this: A white invasion has nowhere to go but out to the right. Getting a base on the edge would prove to be nearly impossible given the positioning of black third line stones, and Black can attack any stones trying to live from the sides fairly freely. So White is stuck figuring out how far in she can drop it. My estimate for the safety zone seemed to leave me ahead in the exchange - however, I lost the game. So I asked the question out of curiosity as to whether this is where I lost it, or if it was further on in the game.

Bill: After Black 9 the game looks close to me. Black is ahead on the board, but with komi and White's having sente with plays worth about 10 points, it's hard to call. White 10 is way too deep, however, so Black should win from there, I think.

Arno: So what are the alternatives to Black 1? Bill mentioned a double kakari, how about enlarging the moyo with something like this? 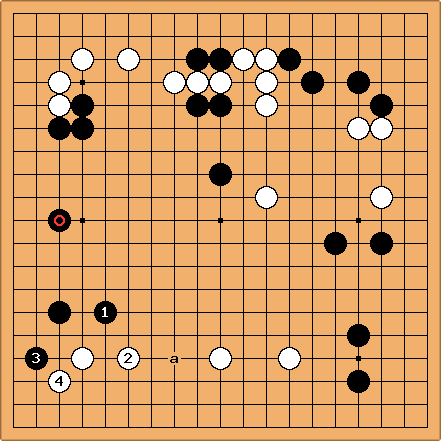 In this diagram White still has a weak point around a. I guess this is basically the same idea, but leaves more aji for both sides, no?

The problem is of course the low position of Black's marked stone. If it were on the fourth line I'd play like this without hesitation. As it stands, White has room for nice reducing moves. Note however, that White's corner will not become as large as in the game.

Bill: Interesting idea, Arno. :-)
But I don't like White 4. Surely this is better. 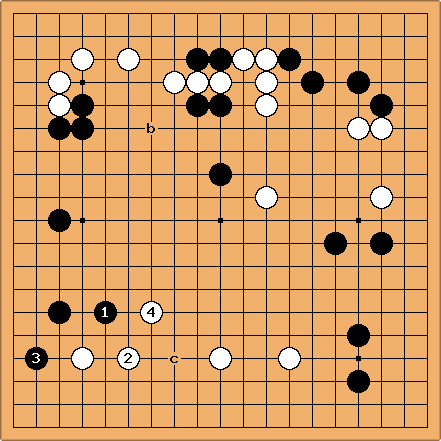 White 4 plays on the moyo frontier, enlarging her own at the expense of Black's. If Black 3 is at 4, White b is big. If White c - Black b, we have a similar position to the one in the game, but a little better for Black, I think.

White 4 is definitely better than my suggestion - I guess my White 4 was wishful thinking :o) --Arno 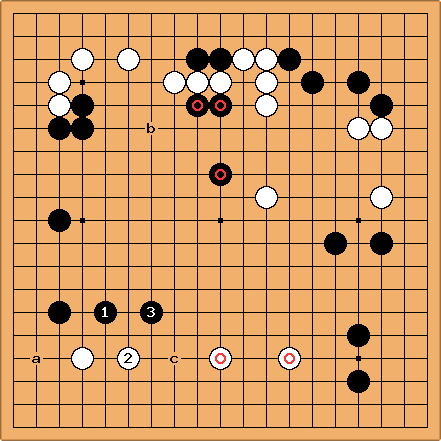 I like Arno's move at 1, but in my view, the follow up should be at 3 in this diagram and not at a. If White answers at c (she probably should), Black should play b and the lower left corner remains open.

However, I suppose White can treat a and c as miai, and invade Black's moyo immediately?

Yes, you are right, fighting spirit calls for a white play at b after 3; and see what damage Black can cause with c. The point b is huge for both: if Black plays there, the marked stones become part of the moyo border and if White is allowed to play b, they become a target.

On the other hand, if white allows a black move at c after 3, the marked white stones might also become a target. Maybe the safest way would be for Black to play 3 at b. This is quite difficult, and I really don't know which is bigger: 3 or b. Anyway, I am sure that both points are bigger than a. 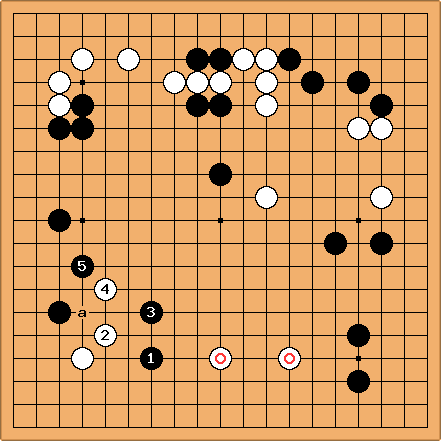 For a double kakari I like Black 1. Lower, and White can build up strength to invade or reduce Black's moyo. Closer, and White a is effective motare. Black's idea is to solidify his territory on the left side while attacking, at the same time preventing White's moyo on the bottom and even putting some pressure on the marked white stones. 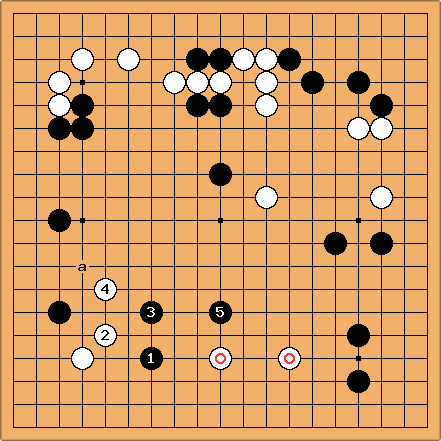 Hmmm. Looking at this again, I wonder if the boshi of Black 5 is not better than Black a? 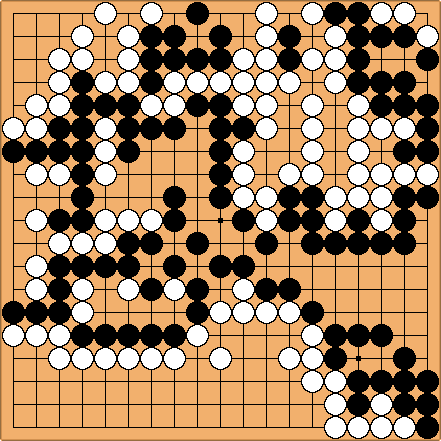