Here is the sequence of moves preceding BQM32. Someone seemed curious. --BlueWyvern 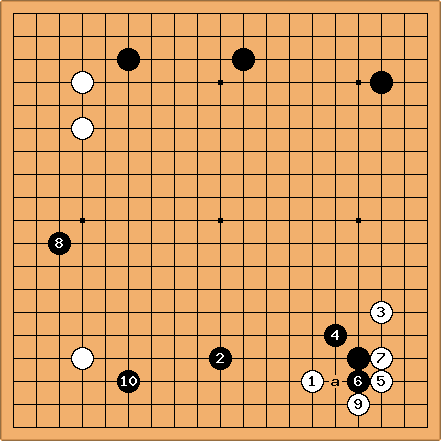 Play went upper right, lower left, lower right, upper left, followed by the establishment of the SmallChinese pattern on the top. At this point, White approached with 1. I was considering extending up, but then I decided I'd prefer a more aggressive line of play, and played the wide high pincer with the aim of splitting up the left side up. Through 7 is joseki I believe, then I decided to tenuki with the splitting move at 8.

When White played at 9, I thought the approach at 10 in combination with the splitting move would make up for White's local profit when she plays a.

DaveSigaty: A couple of points: 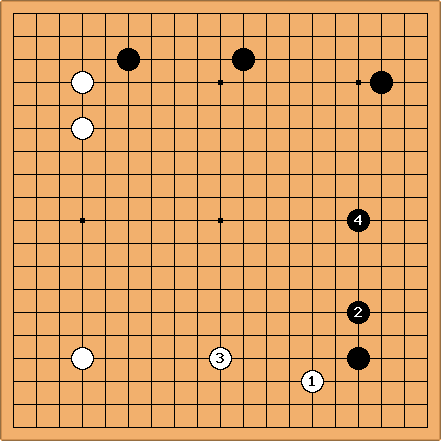 Somehow I have a feeling that your original idea of extending up was more in keeping with the Small Chinese choice at the top. Something like this 2 through 4 leaves Black perfectly placed to make best use of the fighting capabilities of the Chinese formation. White is also developing quickly and smoothly but presumably feels that she is playing according to Black's plan. 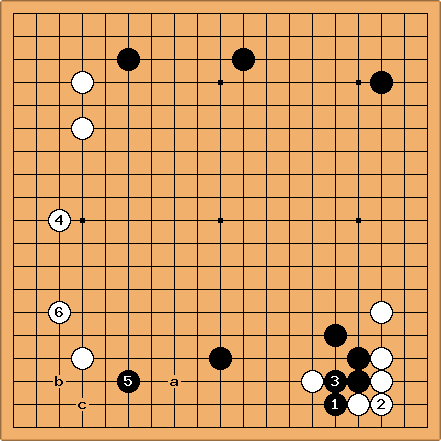 Let's assume for the moment that White next chooses to take control of the left side with 4 and that Black 5 and White 6 are then exchanged. Black is very solid along the bottom. There remains a standard invasion point at a but it only aims at diminishing Black's territory. Meanwhile there is an offsetting invasion point for Black at b. Even if White adds a stone at c, the meaning of the invasion at a does not change greatly.

Contrast this with the actual game where White played at 3. This is much more than just a local territory grab. It undercuts the base of the entire black formation on the bottom half of the board. Especially after White becomes strong in the lower left, there is a real danger that White will divide the black stones in two (possibly even into three) groups and attack the whole bottom side on a large scale. 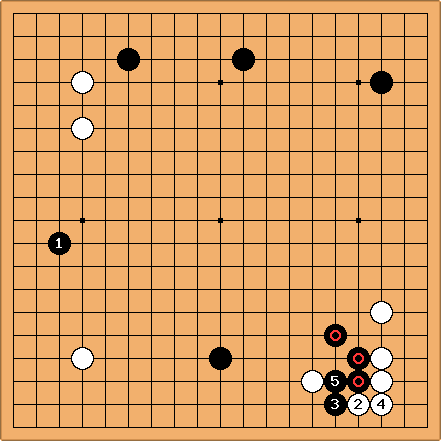 Dave's point is exactly the one I had wanted to make, unfortunately his diagram is wrong. Black 3 here is way too big to ignore.

Allowing White to play at 5 gives White at least 15 points of territory on the bottom right, destroys any possible black territory at the bottom, and causes the three marked stones to become practically useless. The thickness of the white group cannot be underestimated as well.

Dave: Oops! Sorry about that. Black definitely shouldn't pass this early in the game :-)