Next Big Move in the Opening Question 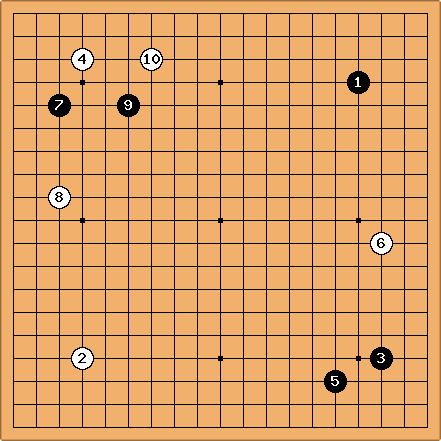 The question is "Where should Black play next?".

For this question, let's set aside issues regarding

dnerra: I think others have more or less said this, but I think it is worth saying it again:

is an exchange, building up influence at the cost of giving White territory. You do not play such a move unless you have a plan what to do with this influence. Territory is always better than influence-without-a-goal. 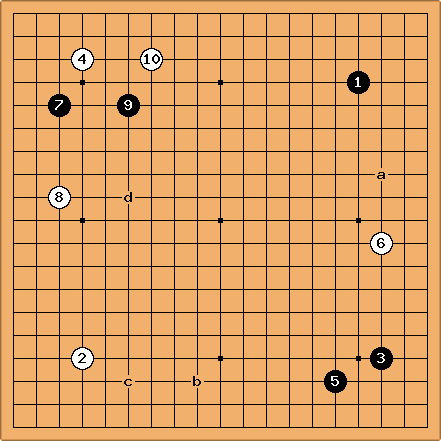 Ian As a 3kyu I am in 2 minds, do I play a to push 6 towards thickness, or b (maybe even c) to develop the shimari. I would have rejected something around the area of d as being unecessary. 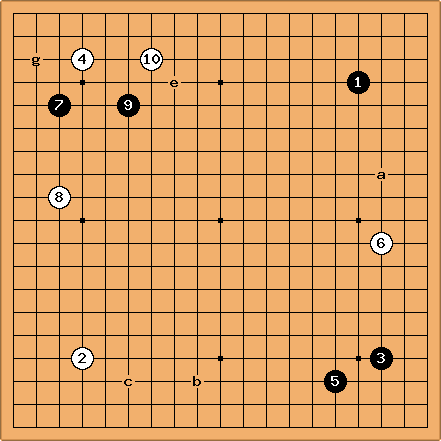 isshoni: I was pretty happy to see that my 14k instinct told me the same thing than a 3k's!
I didn't consider c, though: at this stage, whatever White's reply is, it will most probably end up stabilizing

, and that will hurt

White can't really tenuki Black a but will have more freedom to answer Black b. So to keep real sente, I'd play a, and then decide whether to play b or support directly

. Because I'm not comfortable with them, I'd settle for a couple of press plays starting with e in order to build influence on the top that would work well with a, given that the top side is wasted for Black anyway, and then I'd slide at g to stabilize my group.
Whatever follows with

, on the left or down sides, I'll have no weak group and will be able to try to handle/deflect White's next action plan.

But in the process, I made lots of assumptions concerning White's plays, OC..And also I didn't set aside

But to sum it up and answer the original question, my next move would be a. And if White were to ignore it and develop

on both sides instead, i'd scratch my head and think again! 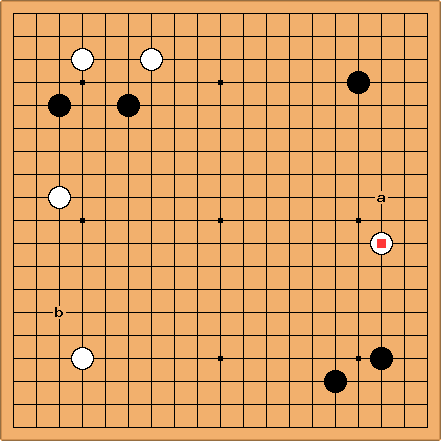 Dieter: I see two areas of interest: the upper right side, where a lone White stone can be challenged and the lower left side, where White's wide connection can be broken. Black must keep up the pressure on White and use his initiative.

So, in the upper right I'll choose a, because it applies more pressure than one point above, and also because the extension from the corner is even, hence not leaving an obvious invasion point.[1]

In the lower left I'll choose b, also for reasons of keeping up the pressure. However, there is an obvious answer for White, combining a pincer with an extension. So I'd concentrate on the right side first, treating the left somewhat lightly.

Ian: The consensus tends towards a so far - I wonder do you feel that because the marked White stone is also her weakest point, that this should serve to reinforce the decision to play a. 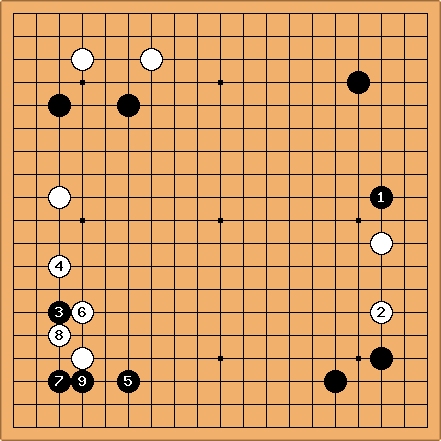 However, the double approach may give a good result for Black. White looks overconcentrated and Black is light on the left side. 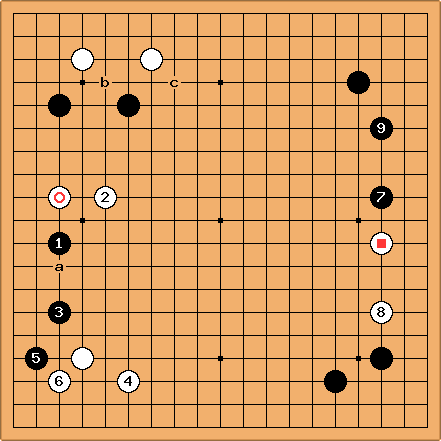 Andy Pierce: Black needs to engineer an attack on

since he gave white territory on the top, so black can't start with

because white settles too easily with a (as Dieter mentioned). It is too early for black to go into the UL corner. White's asymmetric wedge on the right makes playing there unattractive. Black's extension to

is too loose to end in sente, so I'd play on the left first.

zinger: If black is going to play a pincer such as

anyway, is it better to lean on white first with b and perhaps c ? 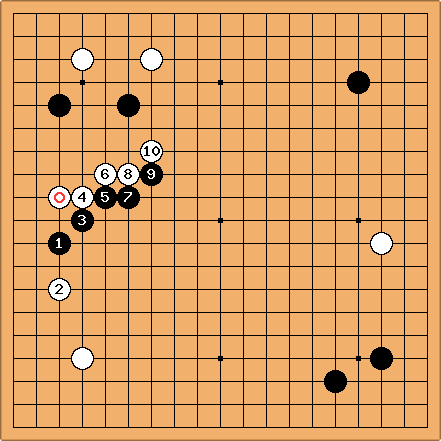 ? I'm not sure how this works out tactically but my feeling is that the two space extension is too thin to engineer an attack.

Velobici: This broaches the issue of Black's two-space jump,

in the first diagram. This is a mistake by Black. The two space should only be used when Black can launch an attack on the White three space low pincer stone,

in the first diagram. That attack is not possible here due to the White stone in the lower left corner. See Yang Yilun's Whole Board Thinking in Joseki Volume One, Three Space Low Pincer section. 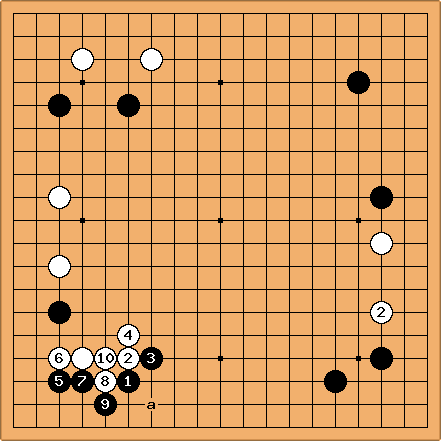 My double approach can be improved for White, too. ( 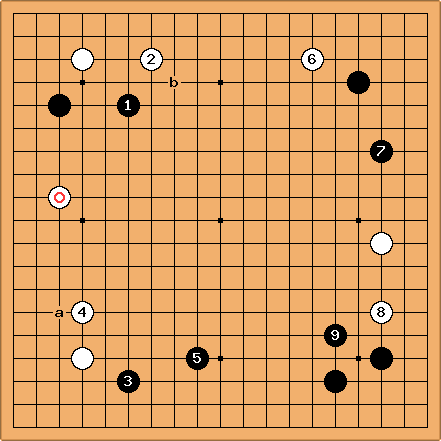 Bill: The querent asks us to set aside issues regarding

. Well, OK, but what was the point of

is not unexpected. What's the plan?

This is a calm opening. One thought is to take the last big play in the opening. That would be on the bottom. Black starts with

. Note that he does this before

is a good play.

Another thought is to jump into the middle game with, say, an approach at a. But

is a bit far from

, so White is not settled there, anyway. Besides, that is not consistent with

(BTW, I agree that

Charles Yes, it is more interesting if one is allowed to look at

. One thing it does is to leave behind a play at b. Another is to make Black more rather than less interested in counter-pincer on the left side.

Bob McGuigan: Some attention should be paid to the two black stones in the upper left because White can make the group heavy as shown in the following diagram. This makes me reluctant to pincer on the left side. Before this Black can settle his group (in gote) by attaching at a (not sliding to b). I think I'd like to press on the two white stones in the upper left (b in Charles's comment), hoping to strengthen the two black stones and make it more attractive to pincer on the left. 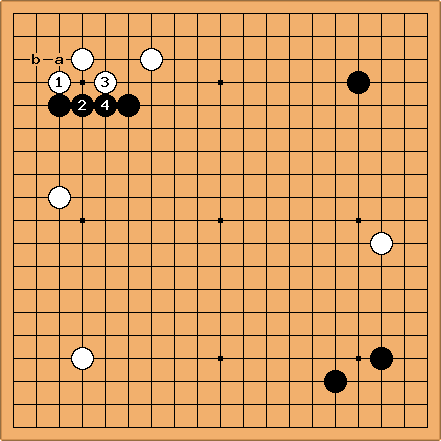 zinger: This is why I think Black should play

himself, before the pincer.

Charles Given a black 4-4 stone lower left, rather than a white one, it is easier to see Black strengthening himself upper left and then attacking on the side. The two-point jump out can also be a light play. If so, here, Black plays it to deal rapidly with the area and move elsewhere. That's not out of the question; but as Bob points out, Black can quickly get a heavy group here. It is true that Black has some forcing plays here. Black really needs a light position, or a settled position, or some sort of attacking position. Forcing once may not solve the essential difficulty. 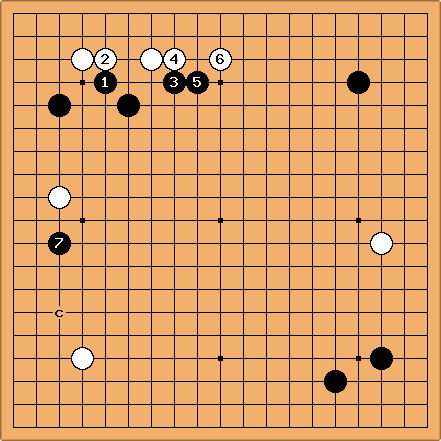 zinger: Actually I was thinking of forcing more than once, but I'm not sure white would be so cooperative as in this diagram.

Charles Actually it tends to be considered more cool to omit

(keeps 3-3 options open). But I've now looked at what the pros do. Mostly on a side like the left side here they come in immediately at c. That is, try to get an immediate use of the two-point jump, but leave out the forcing plays for the moment.

Answer from Professional Review of Game 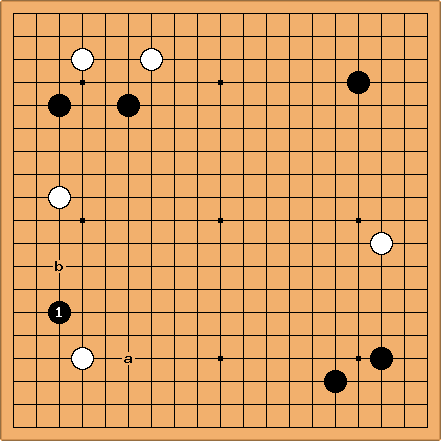 Velobici: When reviewing the game, the professional's comment was that Black should have played at

. White has two responses: a and b 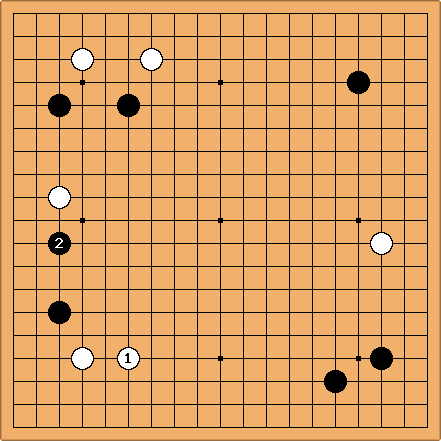 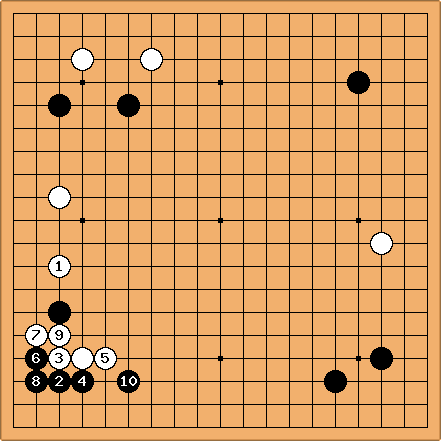 Charles Very interesting that White's diagonal attachment is below the threshold of professional attention. 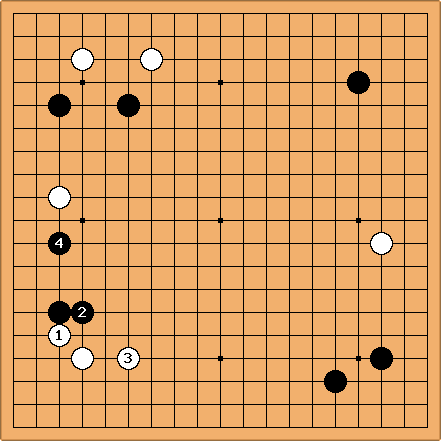 Dieter: (this is what Charles means, I think) 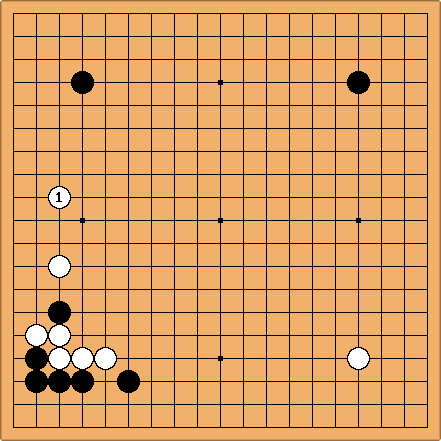 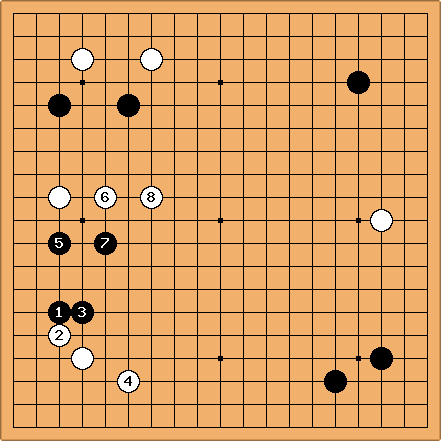 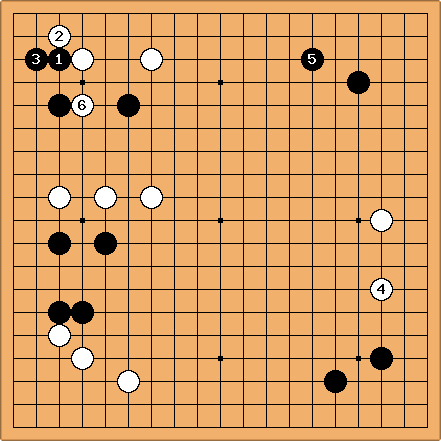 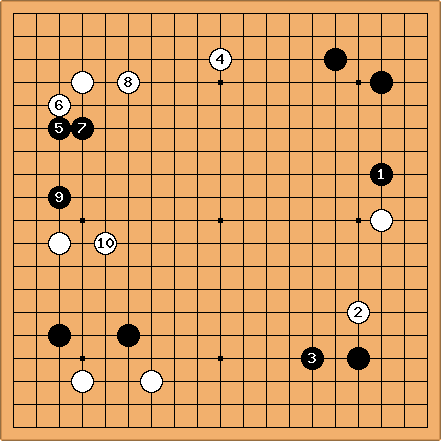 Here also the stone on the right is different --Dave