RiffRaff: I am a Double Digit Kyu, probably in the 13-14k range. In a recent two-stone handicap game on DGS, I came across an opponent who seems to love the 3473 Enclosure (keeping in mind that DGS allows handicap stones to be played anywhere). I hadn't really come across this before, so I started off pretty much staying away from these enclosures and building my own Sanren Sei formation. The question then was where to begin with invasion and/or reduction on all these large scale extensions: 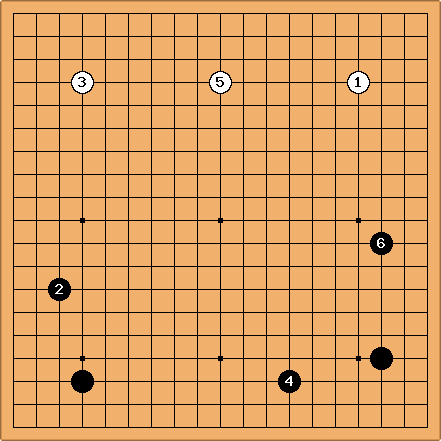 My initial attempt at it: 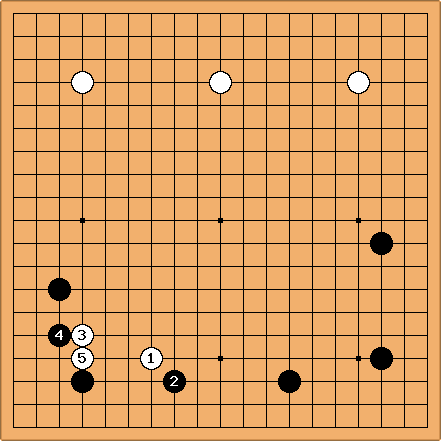 And... I'm not sure I like where this is going already, even keeping in mind that I'm down two handicap stones. Is there a decent way to "punish" these loose enclosures? It feels like black is playing too fast and loose here.

Bill: First, a word about this enclosure. By itself it is weak and slow at the same time, which seems pretty bad, but Black can shore up the weakness with

, and now Black's position is just slow. In addition, if White were to invade at a it would be like a severe one-space pincer followed by tenuki -- not a good idea for White, as a rule.

Therefore, thoughts of punishing this enclosure directly may become a trap. For instance, in the First attempt diagram it looks like White is shoring up Black's weakness while making a weak, attackable group. This enclosure is already weak and slow. Patience is the right attitude. 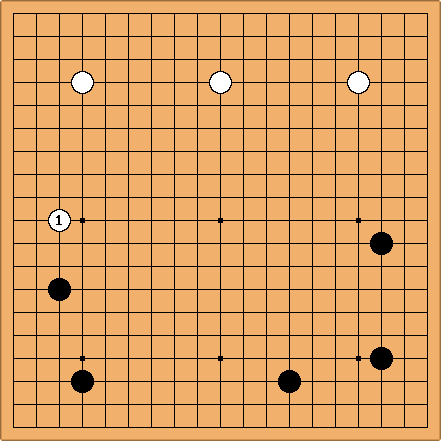 looks like a good play, developing White's framework while further weakening Black's bottom left corner. There is still room for a wedge on the bottom side.

As usual with questions on the opening, I have some critique of /earlier play. 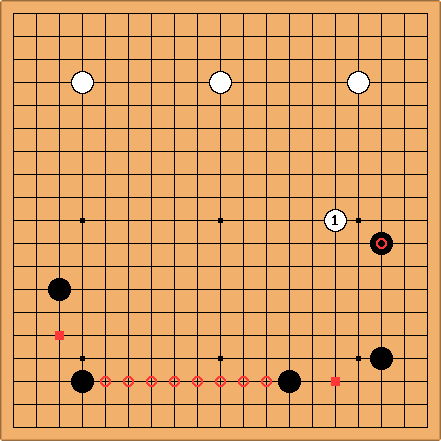 Charles Against my natural style, I begin to think

would be interesting. The area with the circles seems currently not to hold any good play for White.

dnerra: That is an imaginative move! I like it, however to me it feels like an admission that the marked black stone took a pretty good point. In fact, I think

should rather have been played on the right side.

Charles Bear in mind that this isn't an even game! White has a long way to make up, still. There are miai of the invasions at the square-marked points. These are easier with central influence, (there are ladders). It is true that

would have been good play.

does not appear standard. It is neither a five space extension on a open side of the board nor a proper corner approach to the Black star point in the lower right corner. Is

a good play due to this being a 2 stone handicap game?

is standard with a star point vs. a facing enclosure. It leaves a two space extension towards the enclosure, and is close enough to the star point to prevent an ideal base for Black. See /earlier play.

Velobici: Thanks, Bill. Seems that I am misapplying BQM259. In BQM259, there is also a six space extension as there is here, but there is not enough space for the two space extension due the earlier moves in BQM259.

Bill: Well, the six space extension there is also a three space pincer. It's an excellent play.

BTW, I created /earlier play for discussion of earlier play. How about moving some of this material there? 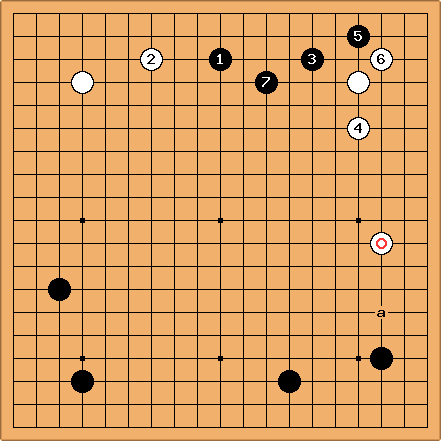 Charles Another aspect. These are reasonable plays; I don't know if they're best. But now we can see that White's formation on the right side is really good (efficient). The extension

is good and if White plays a it seems even better. (Is this a tsume?) In any case White should be happy.