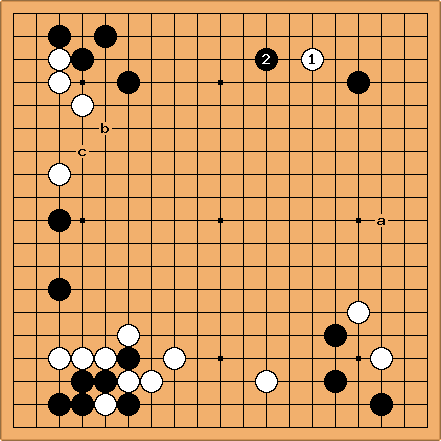 From a recent game of mine, the top is not large, not developable, for Black. Black played at

in response to the White invasion

. Black should have played at a. The right side was important (prevent growth from the two White stones in the bottom right). Black was already strong enough on the top.

The question: What are the characteristics of a developable side?

Velobici: Bill, the full board is now shown. I was told by a professional that the top is not developeable, that the right side is important. That Black should have played at a in place of

Bill: Thanks for showing the whole board. :-) I can see the value of Ba.

As for the top, I would not have used the word, "undevelopable". I would have said, "non-urgent." I'm not sure what the pro meant. <shrug>

BobMcGuigan: In a game commentary once Mr. Yang Yilun said that Black's position in the upper left is "defensive" and that it is hard to develop effectively from a defensive position. Don't know if that helps. I think it's like Black's position on the lower right in the diagram below, resulting from the tsuke-hiki joseki. Pros also say it is difficult to develop from that position, too.

unkx80: While I am unable to answer the question with respect to the given position, a general answer is that a developable side is usually shaped like a box, while an undevelopable side is flat - stones are mostly on the third line.