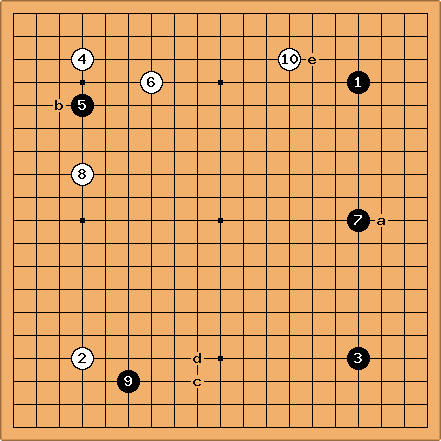 As I feel that

is not a severe attack, I will treat the upper right stone lightly, trying to build up a moyo of my own.

PurpleHaze: If you feel that

is the move here then you should have played

is bad does not mean it can be ignored.

is not necessarily bad. And it certainly can be ignored. Black has prevented a White shimari with sente. He can regard

as kikashi and treat it lightly. 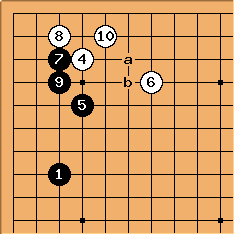 Leaving white with very bad aji around a.

Dieter: I do not agree at all with this. The question here is: can

be cut ? If so, is there compensation for White ? If not, then we have reason to say this is not joseki.

Klaus:The pro's and con's of

vs b have already been discussed at 4-5 point 4-3 approach inside contact, follow-ups,

Dieter: Let's have a look at the 3-4 point, high approach, ogeima

Klaus: Something else: Tenuki must be o.k. here, because even after

black can still attach at

in order to ensure a small base. In my opinion, black is doing fine, as long as he can find valuable points on the rest of the board! This sure is a matter of taste, but maybe not a mistake.

What do you mean when you say "treat the upper right stone lightly, trying to build a moyo of my own"?

Klaus: Well I mean, I will pretend this stone can live on it's own, or it may be sacrificed. Light play means denying the opponent any worthy target. (see light)

starline: Could you explain some more the reasoning behind your last move? (

) It looks strong for me, as it seems that any attempt I make to form territory on that side of the board (or even invasion) is going to be very hard for me now. Would that mean that g16 was a mistake, and I should have played on the right side of the board instead.

I am never sure when it is best to invade, or when I should be building, or the reasons why it is better to do one or the other (and under what circumstances).

Klaus: Well you could have played at a instead of

was attaching at b, play a usual joseki, end in sente AND then play at a. I would have tried that. Something about my right side: This is an attacking formation. As you rightly mentioned, any white group will find it hard to make a base here, without being confined to a corner. Black will later allow one white invading group to live or escape and try to cash in some points by chasing it. (See san-ren-sei)

In real life I probably would have impulsively made a pincer move at c (especially in a real time game) I tend to have the mentality: 'if it moves, attack it!'

Klaus: A distant pincer might have been nice here, but I prefer d over c. Why? Well, black has a framework on the right, so I would want to make sure that white gets an access to the center here, but I am playing too high anyway...

starline: What do you mean when you say you are playing too high?

Klaus: I tend to prefer the 5the line over the third. I like Influence instead of points.

starline: I am ashamed to report that I have never studied any joseki. If that is the case, am I attempting to run before I can walk by trying to learn general fuseki strategy?

Klaus: There is a proverb which says: Studying joseki makes you 2 stones weaker.

In my opinion you are doing the right thing by starting with fuseki. You must know what you need in a corner globally, before getting too much involved in lokal sequences.

HolIgor: We are all different. I have not studied any fuseki yet. I've just begun to look at the ideas in the pro games I try to comment upon. I know some basic joseki and usually rely on my common sense in case of deviations. I believe I am better in tesuji and life and death, though there is a room for improvement there too. This does not mean that my fuseki is awful. Simply, I've never made any study there.

starline: I found this A Zen Way to Joseki to be very interesting reading.

is a bit odd. Why not exert more pressure with e? 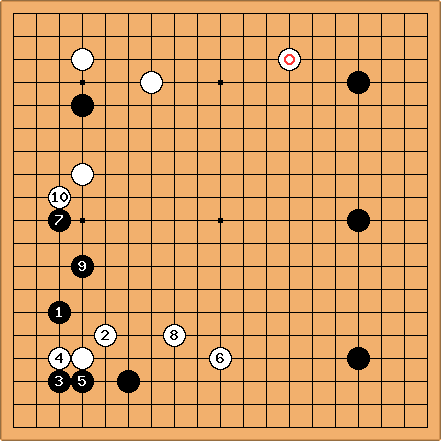 unkx80: I guess the move that really needs commenting is

. I would like to ask, what is the purpose of

, and where is the focal point when

doesn't look so bad to me, as long as White does not make the exchange,

starline: Maybe if earlier I'd played

then a move around

would have been more effective? Also, I played

because I thought that if black played around there, he would have too much stronghold in the lower and right side. Where would have been a better move for