ilanpi (4K) Here are some strategic principles of Go as applied to 9x9. This might help you understand 9x9 openings.

I should note that a number of Go players assert that 9x9 does not have any strategy. I believe that this statement is made in comparison to the highly developed strategical nature of 19x19 Go. In order to resolve differences over this issue, I will try to make myself as clear as possible by defining what I mean by strategy: "plans of play, heuristics (that is proverbs), sets of techniques, and other general principles which help you play a game."

That said, it is clear that 9x9 is best characterized by fighting, and I believe that the opening will not generally last more than five moves In other words, the first fight should break out by the sixth move, at the latest.

However, I also believe that there are a number of distinct consistent plans of play that can be implemented.

Some techniques for 9x9

By this, I mean standard light invasions of corner enclosures in which invader is satisfied with destruction of some part of opponent's territory. This is probably the most important technique to learn in 9x9.

All beginners are familiar with the 3-3 Invasion, but to progress in 9x9 (and later in 19x19), you will need to know standard invasion-reduction techniques for other corner enclosures. The big difference will be that, unlike the 3-3 invasion, the invader is not guaranteed life, but must make light moves, that is, be prepared to make sacrifices. Switching goals from guaranteed life to sacrificial tactics, gaining something elsewhere, represents a big conceptual breakthrough. 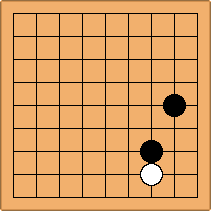 White's move is a typical example. This move is a probe, and White's idea is to either get the corner or compensation elsewhere. 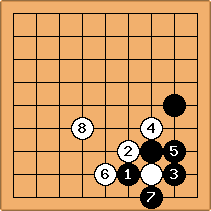 Black has defended his corner, but it looks like White has excellent prospects of the bottom left quarter of the board. Note that Black seems a little overconcentrated, that is, a lot of his territory is occupied by his own stones (as opposed to the territory that White intends on making on the left side).

It is important to note that White's second move is a cross-cut which is one of the fundamental techniques used to implement this strategy. As usual in Go, don't take this sequence in isolation, imagine other stones on top, for example. 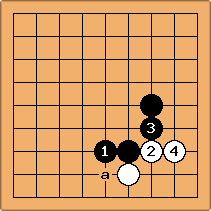 That was just one of many continuations (a large number of variations is typical when a cross-cut occurs). Other possibilities are given on the probe page here. In particular, Black has the line below as an alternative the hane.

I learned about these techniques in Cho Chikun's book All About Life And Death, Vol. 2, which has excellent chapters on such invasion techniques. Another good reference is the book Get Strong At Invading by Richard Bozulich. 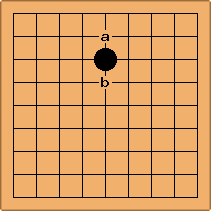 When one side of the board is open (the top in this case), this Black move (or one point above or below at a or b) is a miai invasion. This means that if White attacks from the left, Black can live on the right, and vice-versa.

Black must be very careful that fighting on the bottom does not spill over to the top, as the urgency of the fight could prevent Black from following through with the miai strategy.

Here is an example from professional play 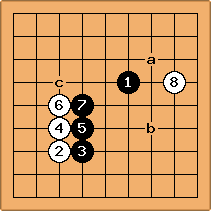 This is a game between professionals Kozue Mukai and Daisuke Murakawa (18 and 12 years old, respectively!). White 8 leaves a and b miai, so it is an example of such an invasion.

Rob van Zeijst analysed the referred game in a dedicated

Looking again at that professional game, you may be surprised by Black's move 3 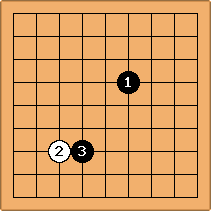 Indeed, if you've mostly been playing 19x19 Go, you will be surprised, and maybe confused, by the frequent use of contact moves in 9x9.

In this case, Black is using an influence strategy (this will be explained below) and the idea of the contact move here is to implement this strategy as forcefully as possible. You will note that this violates the principle which says don't attach when attacking, marking the special nature of 9x9 Go. 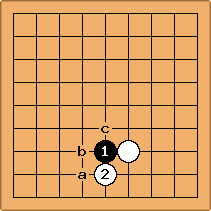 If you are overwhelmed by such contact moves, then I recommend you consider the following technique, which seems to work in many situations.

White's response is quite flexible as it threatens to pull out the White stone 2 by playing at a or b. So Black, who wants to contain White with a single blow has to contend with some problems of his own. For more about this, see the page explaining why you don't attach when attacking.

I learned this response by looking at Cho Chikun's 9x9 games on this site:

http://gobase.org/9x9/book4/ Study these games to improve!

Here is one of the most popular openings in professional play

Anonymous: (! based on what? this statement contradicts the opnion of a pro study group at the nihon ki-in in Tokyo)

Phelan: I do not know the basis for the statement, but could you specify what is incorrect about it? That way, the page could be improved. 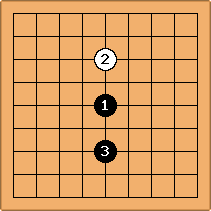 Black's first move leaves the top part empty, so White implements the miai strategy. Black then takes care that White doesn't do the same to the bottom. 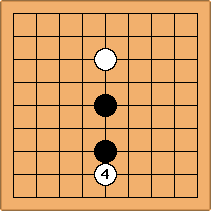 Which White does anyway! This move is a probe and White is ready to sacrifice it. The idea of this move is to leave it as a potential problem (technical term is aji), that is, White might later use this stone to make sabaki by either making life or helping neighboring White stones. 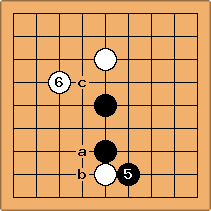 White does not try to save his stone, which he treats lightly. Attempting to save this stone would be perfect for Black. For example, Black could humor White by letting him live while developing power to later overwhelm the top (an application of the principle of leaning attack).

Likewise, Black will not try to capture White's lone stone outright, as this turns out to be slow and inefficient. It is true that Black would ensure territory at the bottom, but he would be overconcentrated there, and White will have had time to map out a larger territory more efficiently at the top.

For various continuations from this opening position, look at the games of Cho Chikun which can be found here:

Aim for one or maximum two groups

There's a proverb for 19x19 saying that Five Groups Might Live But The Sixth Will Die.

The same principle applies to 9x9, but on a smaller scale and with an effect that is easier to spot. I've found that if one player has more than two groups on the board, the other player should be able to win and probably kill everything. I modestly call this "Alexander's Law for 9x9". ;)

So, split the opponent's groups enough on 9x9, and you'll most likely win. See also the page about Splitting Attack, it applies even more for 9x9. 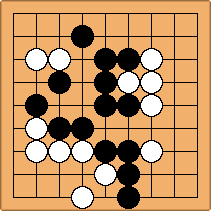 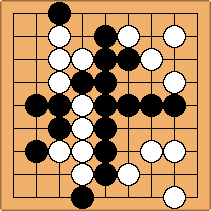