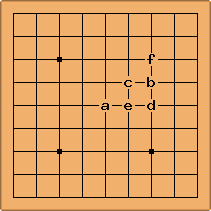 mgoetze: Maybe you should specify which set of pro games you're talking about... from the recent Ricoh PairGo games, [a first move at] e seems to be quite popular nowadays (at 6.5 komi)...

DougRidgway They are all fairly popular: in my current set, largely taken from Gobase, b-e have been played 70, 47, 30, and 27 times respectively, out of 311 games. Also see

ilanpi (4K) Here are some general comments about 9x9 opening theory. I hope that these are consistent with what can be found in professional 9x9 games, e.g., as in

I believe that I am correct in stating that the opening in go ends with the first invasion or reduction. The reason for saying this is that this is when fighting begins, so the game will proceed along unpredictable tactical lines, as opposed to general opening principles.

That said, one can almost conclude that the opening in a 9x9 game will last at most 5 moves. This is because if both sides develop territorial frameworks in the first 4 moves, e.g., corner enclosures, then Black's 5th move can increase his territorial influence, but it seems that White, on his 6th move cannot hope to compete by increasing his, so is virtually forced to invade Black's position or otherwise start a fight, typically with a contact move.

Here is an opening principle which seriously improved my 9x9 results in the last few months: In an even game (6.5 komi), Black does not get a good game by making a corner enclosure with his first two moves. On the other hand, in an .5 komi game, (handicap of about 3 ranks) it seems that making a corner enclosure (3-4 point + large knight move) is a simple and safe way for Black to keep an advantage.

DougRidgway: Robert Jasiek likes to say that 9x9 is a game without strategy, by which he means it's all endgame. Seems a little extreme, but maybe not if you read it as macro endgame. Even for a DDK like me, general endgame principles apply very early.

A lurker: I submit that the most significant strategic decision in a 9x9 game is whether to keep expanding an existing group or to split up and start a new one. Generally, this is white's problem, not black's. Please discuss.

holosys: You can see lots of fascinating stats on 9x9 openings by using the 9x9 sub-database at the excellent website

DougRidgway: Am I missing something? (I hope so!) All I can find is 9x9 corners of full board games.

Some 9x9 openings from Go Quest

The GoQuest server names some popular openings when played. Below are some I encountered while watching highly ranked players' matches. While these openings are common, they certainly do not account for all openings. At least than half of the games I have seen use different variations. The most popular of the variations below are probably "new orthodox" and the "black boomerang". Opening moves starting with sansan (3-3) or moku-hazushi (3-5) are less common. 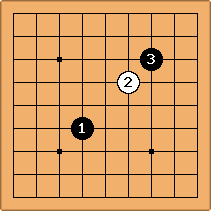 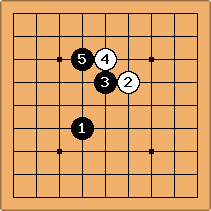 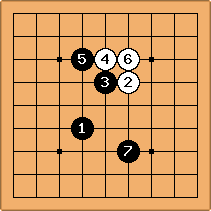 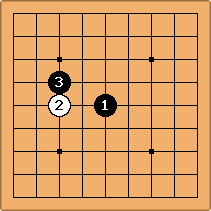 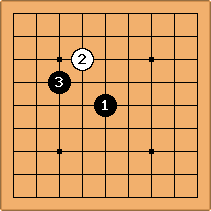 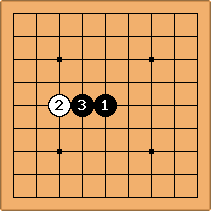 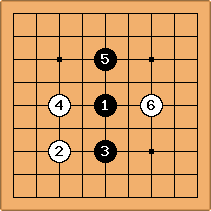 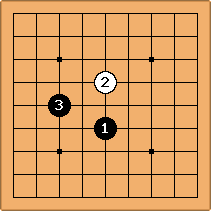 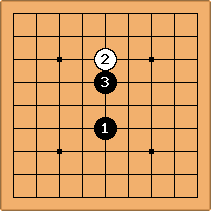 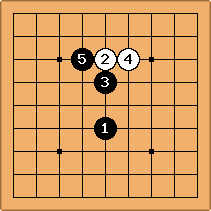 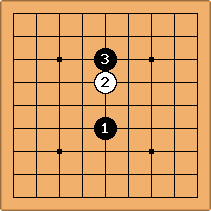 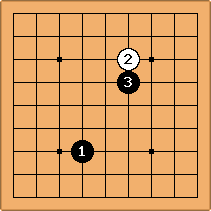 What does Leela think is the best 9x9 opening

A curious person: Has anybody done some statistical analysis of which 9x9 openings Leela Zero prefers?

fmylifeuck: This section seems like spam, should it be removed?

Patrick Traill: I think we should tolerate this: although it is Monteo trying to propagate his approach to 9×9, I think we can be broad-minded about a moderate level of soap-boxing.

Monteo (2 dan) Don't be too much concerned about the opening patterns or forms. If you want to breakthrough to or beyond shodan, try to see the art of playing 9x9. Try to see the 9x9 strategy, not the stratagems you are trying to figure out above. Read The Art of 9x9 Go if you cannot wait until you are strong enough to see it. When you see the strategy and play by strategy, the stones will appear in standard froms unintentionally, and you truly know why.