Nico: As I have seen that this is the most frequent move, I'd love that some experienced players illustrate some typical 9x9 openings at tengen, to first show how to use it effectively, but also how to defend against it. 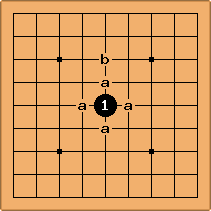 Charles Matthews Many 9x9 games are available at

http://gobase.org/9x9/. This opening is the standard, I believe. 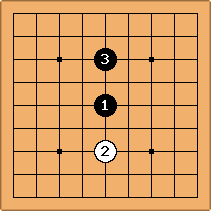 Matthew Macfadyen once used this 9x9 position when I asked him some question about probing moves. (I can't remember what the question was now.)

Anyway, where should White play next? 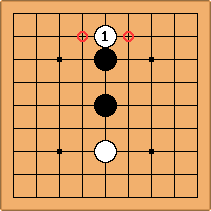 The idea is for White to probe at 1. Black then will normally want to answer at one of the circled points. Then ... 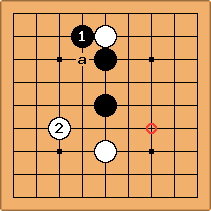 The symmetry is broken, so White can choose to play 2, which is now better than the circled point.

Well, I thought this was interesting. It probably does not belong on this page. So feel free to move it to a better home. --TimHunt

Oh, shall. A bit questionable that, though. Black could for example answer at a. White can claim a good exchange perhaps, but anything on this size of board is so tactical that you need some concrete continuation. Charles 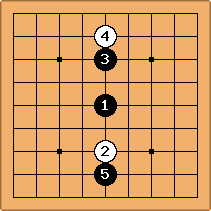 If Black doesn't break symmetry, the game could also be very interesting. Kosh 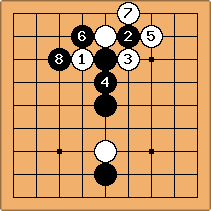 Here is an asymetrical variation: 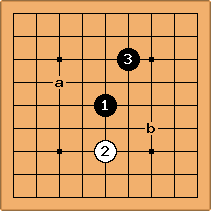 This allows Black to be flexible anough to make a triple knights shape (two normal knights and one large knight) at either a or b. Note that the resulting shapes by playing at a or b aren't the same (Even if White allows Black to choose between them, the

keeps everything from being symetrical).

The technique here is to either force White's stones too far apart and cut... or to make White's stones safely extend and expand at a greater rate because White needs to be cautious.

It may not appeal to everyone -- But for players who appreciate rapid development, or those who enjoy the complicated Taisha, this mini fuseki may be for to you.

The bump page has example of another possible tengen opening.

Charles Matthews Just found this link in a rec.games.go posting by Richard Hunter:

The game record there is of exactly this opening, although sadly a ko fight going on where the probe was played obscures it a bit. And there was I being sceptical about all this. What is said on the game record image is that this is a game from 1994 between Yamada Kimio 5 dan and Cho Chikun, with komi at 5.5. 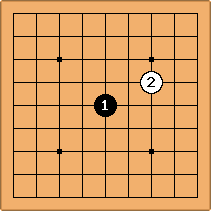 Phelan: What do you think of this reply? I like it because if Black grabs one corner, White can play 3-4 in another close corner. 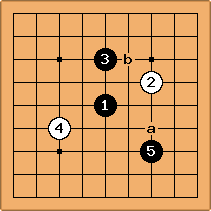 JohnMoser: I think Black now claims the top left or the bottom, and severely threatens

on the right side lets Black build a wall, split white stones in the left, try to split

, and might get the top side and maybe attempt to invade the corner. Show me what you think of 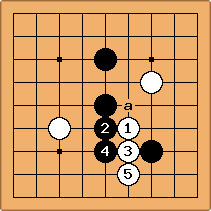