alexanro (KGS; Alexander F. Rødseth) suggested that if white has three groups on a 9x9 board, then white will lose. Or perhaps better put: white has a hard time winning with three or more groups on 9x9.

Being a simple idea, we were both wondering if:

b) This idea is self evident.

d) All of the above.

See also "Aim for one or maximum two groups" in 9x9Strategy

Calvin: The assertion needs to be made clearer. I can find pro games where white wins on 9x9 with 3 groups as long as one of them is small and dead. (Separate live groups cost too many stones :-) Out of 117 games, I can't find any where white is separately alive in three places in the endgame. I guess you are assuming perfect play by black, too, in which case the problem is about as difficult as solving 9x9 Go, which has not be done.

If the question is whether making a third group as white is a good strategy, that depends. If in the process of making that third group you can kill one of black's groups, that may be a winning strategy.

DavidB: The question is the latter: Can white live in 3 separate groups? It is enlightening to know that in 117 games, such a position could not be found.

RBerenguel: Playing a lot of 9x9 games in Littlegolem (well, a lot only means that I play there more than in KGS), I have a proverb that I use to apply while playing as white: If you make two alive groups, you (use to) win. Well, it doesn't apply always, but it is an important guide to play 9x9 with komi.

Fenris: Intrigued by the question, I looked at DGS games. There are thousands of 9x9 games, so I limited the search to games where W was 1-dan or above. There are still a great many games in that category, so assuming it would be difficult, I picked games where komi was high (5 or greater) and the winning margin for W was low (1.5 or less). And there are still a great many games, so I picked maybe a couple of dozen at random (not having the patience to trawl through 117 games!). I didn't find one where W had won with 3 groups.

However, as Dieter says, it is easily disprovable - it only takes one counterexample. So all you go players out there, can you come up with one of your 9x9 games where you won as W with 3 groups?

But then it occurred to me that the conjecture may need qualifying. If the answer "Yes!" comes from a game between two 30-kyu players, will it be accepted as a (dis)proof? Or will you say that a certain level of competence is required to prove the conjecture? And if so, what level? Amateur dan? Professional? And what if W wins with an enormous komi - should there be a limit on that?

Fenris: Quite right - criticism accepted, 2 changes made, please delete your comment and this one if you wish.

Maybe I should have looked at 30 kyu games with komi greater than 41.... Just a thought...

trontonic: I think that 30 kyu players aren't more likely, but less likely to play something as strange as a game where one player have three living groups. Btw, your finds were interesting, Fenris! And, if this suggestion is easily disproveable, how come nobody's done it so far? I think it's hard to disprove.

Fenris: I was merely musing that 30k players are more likely to play "strange" games... dan players might play games that look strange to the rest of us! I'm not sure if there is any a priori reason to believe either hypothesis, though. But glad you thought my amateur research interesting.

But I've thought of another question: Why White? Are there any examples where Black has won with three distinct, live groups?

Bill: A related question: How often does White win on a 9x9 with only one live group?

Calvin: I'm not going to go back and count, but the answer is a lot, but maybe the same as with 2 groups.

Ryzours I went through DGS games, and found that two stones handicap

game . Does a global seki with a komi counts?

Fenris: Fascinating - of course it should count. Both W and B have 3 live groups - alive in seki is still alive. W won by the komi less the difference in prisoners. It proves two more general cases of the conjecture - (1) that it is possible to win with three groups, and (2) it is possible for W to win with three groups. But I don't think that was the original intention, so perhaps the conjecture may need rephrasing for the more specific case where one side has 3 live groups (at least one of which is) not in seki, the other side has at least one live group (not in seki?) - and beyond that, the special case where the winner is W. 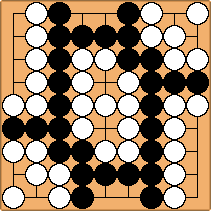 --- jpduke? Well, all I can say is that I only remember one game out of all my many thousands where I was allowed to make 3 alive groups with white, and it took really crass play by my opponent to achieve it. I think that if black plays ideally, it should not be possible. That is just an opinion, not a theorem or a conjecture. :) However, I think I remember a few cases (>1) like the one quoted above where black has gone really heavily for influence, and taken the middle line, for eg, and white has stones on both sides, and then, despite black making a T shape and splitting white's stones into three, he has run out of liberties faster than white due to the small board, (although one of the white groups only had one big eye, for eg).. so either black is alive with two points, in seki with 1 point, or dead.. I think if, as black, one is not careful to concentrate the killing efforts on one white group it is possible to spread oneself too thinly and narrowly fail everywhere.

My imaginary (and admittedly hard to contruct) example: 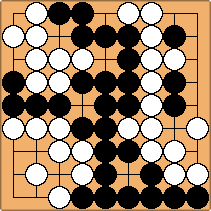 trontonic: Even if this rule of thumb were being rephrased to include the very special cases, I don't think it would really change the level of usefulness for this "law".

The handicap-cases are interesting none the less.

gauss: I just played a 9x9 rengo game on KGS and won by 0.5 as black with three (smallish) groups (komi = 6.5). White had two (also smallish) groups. Players were single digit kyus. Not exactly what this page is about, but close. 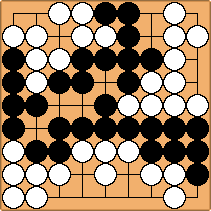 Tobias?: I just played a game on OGS (11k against 19k) that ended with these three groups. There surely were many non-optimal moves, but a regular game. I conclude the law isn't true. Nevertheless, it may be a good advice to aim for two groups.

bugcat: A good job actually finding a game to disprove this theory.