The only difference being the layout, links and some diagrams are split do to the 10 move restriction in Sensei's library.

The article republished here with kind permission from the American Go Association.

There is an SGF file about the 7x7 game but at

http://www.cwi.nl/~tromp/java/go/7x7.sgf but this file does differ from the article below.

One of the more striking differences is that the SGF file uses the New Zealand rules while this article uses the Japanese rules. And the SGFfile has a diffenend best move for

Discussion please at the end of this article. (To keep the article just as it is) excuses for the many versions it took to get it in the right state.

lightvector: Update from 2020 for anyone viewing this very old page - analysis from KataGo suggests that optimal play by Black in Japanese rules is a win by 8 points on the board, not 9. See

https://lifein19x19.com/viewtopic.php?f=18&t=17413 for an introduction to the critical line that human solvers might have missed. My understanding according to some Chinese discussion groups is that this set of lines has also been brought to the attention of at least one of the pros who has dedicatedly studied 7x7, and so far they stand without having been refuted. KataGo agrees that under area-scoring rules however, the optimal komi is still 9 (Chinese-like, Tromp-Taylor, New-Zealand-like all should work - the results don't appear to depend on ko vs superko, or self-capture legality). Also corroborating evidence is that 7x7 is sometimes used as a small-scale test for an AlphaZero replication, and the independent replications that I know of also all have converged on 9 as optimal under area scoring.

On a 7x7 board, Go becomes challenging for even the strongest human players. The challenge (find the best moves for both sides) was taken up in 1977 by a group of Japanese amateurs including Kiga Yasuo?, Nebashi Teruichi?, Noro Natsuo? and Yamashita Isao?. In 1989, with some professional help from Kudo Norio and Nakayama Noriyuki, they reached the conclusion that Black wins by nine points. What follows is a tip-of-the-iceberg summary of the evidence. It should be added that the analysis is still somewhat tentative, and future discoveries may lead to further revisions. 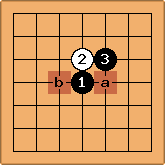 On a 7x7 board, Black's best opening is pretty certainly in the center at

. White can flip a coin to choose between the cross-cut at a and the hane at b. 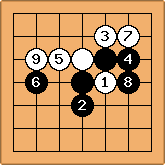 [11]: Here is one sequence developing from the cross-cut at

that leads to a nine point win. Note the bamboo joint at

. This is perhaps the only move for which Black has any choice, the other options being

. White's options are also limited to the timing of 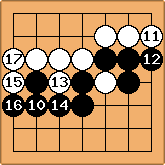 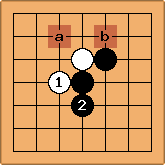 , which leads to many more correct variations. Black should extend at

, after which White has another coin-flip: heads for a, tails for b. 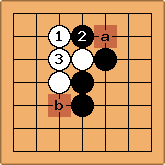 , it is Black's turn to flip a coin to choose a or b. whichever of these points Black takes, White will take the other. Diagrams 5 and 6 show both variations. 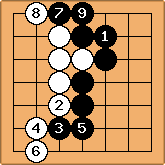 at 12, White replies at a and has a good ko threat at b. The details are a bit tricky, to say the least, but Black cannot do better than Diagram 5, winning by nine points. 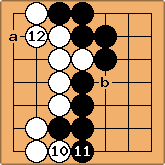 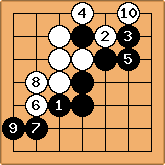 [42]: This sequence also wins by nine points. The apparent underplay at

is the critical move. 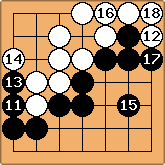 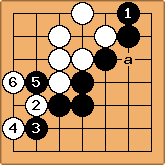 If Black extends to

, White has enough ko threats, starting at a, to win the ko if Black tries to fight it. 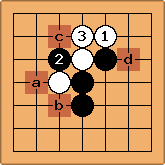 ('b' of Diagram 3), a triple hane opens the gates to a flood of variations. After

, Black has four equally good continuations, marked a to d. We'll sample all of them in a moment, but first let's mention one temptation that Black must resist 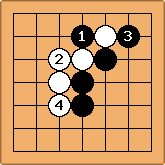 Black should not give atari at

, Black cannot win by nine points. Readers who doubt this should try and see for themselves. 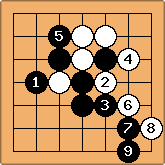 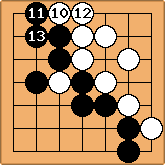 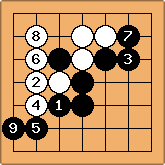 at 9 is also playable. 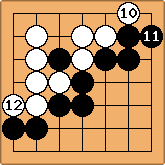 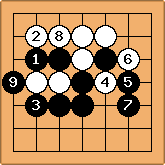 Here is another following from 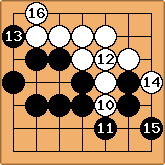 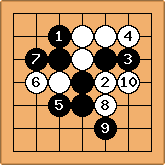 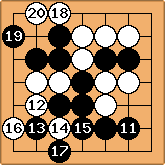 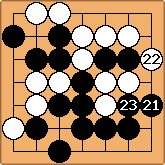 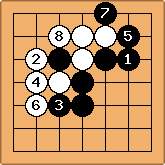 [84]: Yet another variation ('d' from Diagram 8), and this by no means exhausts the correct lines of play. Let's stop here, however to note one final point. 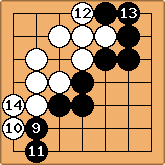 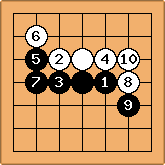 The correct variations so far have been ecumenically correct under all sets of rules. You may think you have seen enough already for a board of this size, but under AGA rules,ING rules and Chinese rules, the number of correct variations increases still further, because eight-point wins promote to nine points when Black gets the last move. For example

, which wins by only eight points under Japanese rules and Korean rules wins by nine under these other rule systems. White ends in control of 20 points (occupied or surrounded) to

It could be argued that Black has not really played well in Diagram 15, because he needs an extra stone to get the same result. This argument may be worth considering when different sets or rules are compared. 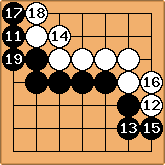