a fair komi for this board is 3 or 4 (depending on the source) and maybe on the ruleset.

http://www.mathpuzzle.com/go.html states that (using area scoring) the fair komi is 4

Optimal play is therefore still to be decided, following the disputing variations. 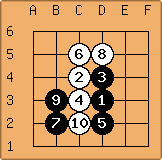 / (in the mathpuzzle solution) is believed to be a mistake. The Davies solution (hane at move 5) is correct. For details contact Ted Drange.

Willemien: I moved the rest of the discussion to [1] 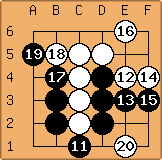 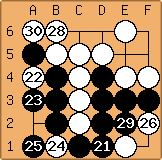 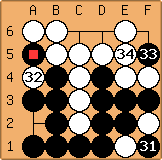 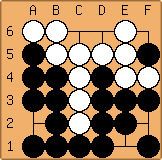 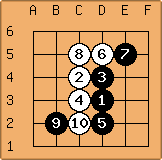 Gohome gives many different optimal paths this is one is the closest to the one given above.

According to Gohome move

is not optimal the better continuation is as in the diagram. 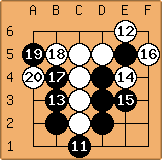 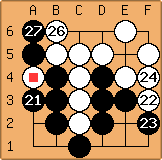 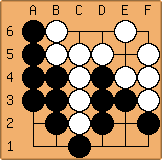 is believed to be a mistake. The Davies solution (hane at move 5) is correct. For details contact Ted Drange.

BTW there are more errors on the mathpuzzle page, see if you can identify them ;-)

Willemien how you mean

is a mistake? gohome does give the hane and decent as equally good. (both lead to a draw with 3 komi) please add the proper optimal play below. (or just copy and paste the sgf for it then i will make it into diagrams)

Erik: I only analyzed solutions for area scoring, so I have no opinion about what gohome has to say about 6x6 (how did he get the solution anyway?). Migos never solved the empty 6x6 board. It did correct some lines of Ted Drange (after 10 moves or so it can solve a lot), but it really is Ted Drange and some others such as Bill Spight, Bill Taylor and John Tromp that did most of the work on 6x6. I know their solutions, but it is up to them to publish it. The Davies solution was published in the American Go Journal.

Willemien the other mistakes on that page to complicated for me to figure out. (I guess you mean some scores for differend sized boards are wrong. need migos, magog or one of your other programs to do that. (But they are not on the internet anymore) please put them back on ...

Erik: Yes, some of the other non-square boards are wrong. I have even confirmed this by comparing results directly with Ted Drange, but I have not found the time yet to publish results. Anyway, its a nice puzzle and I don't want to spoil it too soon for the rest of the world. You wanted to solve 7x7, right? Start simple with 3x7 ;-)

Willemien: Thanks for your comments, I think the gohome solution is mostly done by hand or with mogo as gtp engine (not everything is worked out it is just a database from an sgf file) and the program includes a value manager and duplicator in it. it works quite nice. For my 7x7 project I work more top down I started with almost optimal play in 7x7 (7x7 Article By J Davies and just play around it a lot. making one big gametree. I am not a very good programmer so can not write the supporting software for it. (i managed a program, in qbasic, that split the tree into a game collection but that is about it) My hope is more a general purpose go program and my work is than more the openings database. I did not know that James Davies also wrote about 6x6 (I know about him writing about 5x5 and 7x7) Hope that somebody writes it soon, it is a bit hopeless that the wrong solution is published but the right on is not available. at least now there is a page for it...