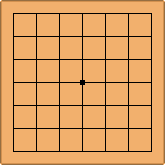 7x7 is an extremely small board, used a lot on KGS. The action is very fast, and Black tends to do best on tengen at the opening. -TimBrent

Wikipedia, the 7x7 board has been weakly solved -- ie. not all legal positions have been analysed, but paths for Black to win the game against any defence have been found.

The citation to the article says:

"The 7x7 solution is only weakly solved and it's still under research,

3. There are many ways to play that don't affect the result."

Under the heading Is 7x7 Go Solved?, the authors had this to say:

In a rigorous mathematical sense, the above books do NOT "solve" 7x7 Go, since even if the main lines luckily all turn out to be exactly optimal, there is not a proof of this, and the books are of course astronomically far from being exhaustive.

There are almost certainly multiple mistaken evaluations in the book and/or suboptimal move choices. One can find many positions where KataGo itself indicates obvious uncertainty, such as reporting winrates that are far from any of 0%, 50%, or 100%.

However, despite no rigorous proof, we do suspect that most of the preferred lines of the above books are optimal, maybe even almost all.

Surprisingly, at basically no point during the book-building process did KataGo substantially change its mind about any of the main lines branching off in the first 5-7 moves. Even as the book grew 5x, 10x, 50x, the results have been very stable. The various mistakes and blind spots that the book *has* found and corrected over real-time KataGo have so far been limited to variations not affecting the top-level results, such as side variations after mistakes or dispreferred moves by both sides, or deep variations within a main line for which there were other working alternatives.

With an exponentially large space it is hard to eliminate all mistakes, and there is still some chance of a significant mistake somewhere, but we hope we are not too far from the point where a bot that always played according to the preferred move from the book until reaching a leaf, and then finished the game with a sufficiently powerful search at runtime, would be literally unbeatable.