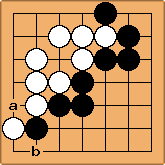 In 7x7 Go b is mentioned as best move. While on an

SGF about the same problem a is given as best move. 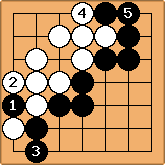 Dieter: I am no expert, but here's what I see. Black's throw in forces an extra move inside White's territory later. 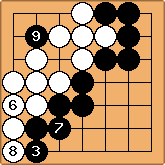 If White inadvertently covers the neutral points, Black has the tesuji of 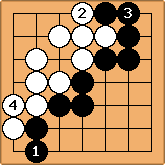 If Black simply descends, White gains a point with

. So I'm inclined to vote for the throw-in. 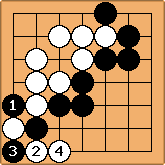 White has a countermeasure though. So, I must think again.

willemien Hi Dieter Thanks for your reply. according to the

Tromp sgf the following is best 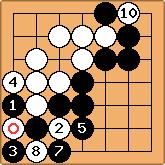 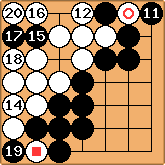 lightvector: Edit from years later in the future! (2021) 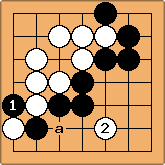 KataGo suggests that the throw-in may be actually completely unplayable for black, because white has this placement to cause trouble next. The immediate threat is the cut at "a", Black must defend it somehow. 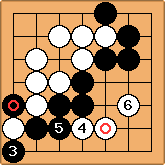 I have not analyzed the variations, but this way for example black is coming under liberty issues while white threatens to live in the corner. 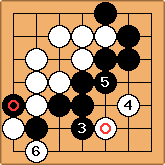 Against a more solid black defense, white does go ahead and start the ko, using the lower right for ko threats.