Alex: This page needs some content. I've had this played against me a few times and never seem to get quite the result I'm hoping for. Here's the most recent game in which it came up. 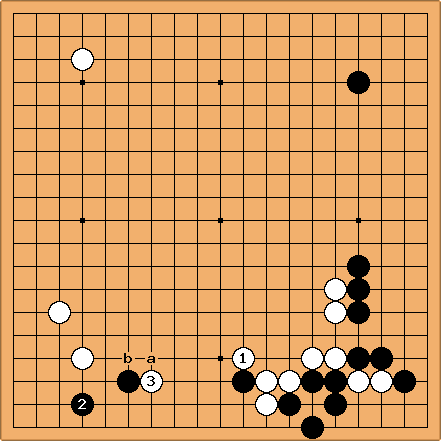 Alex: Ater messing up a joseki in the lower right and letting me get a massive corner (albeit in return for not-insignificant thickness), White plays honte with

then attempts to get back in the game with

when I slide to

. I was afraid of being left eyeless in the face of that massive wall, so I grovelled for life in the corner and ended up granting him a huge centre. I went on to win the game, but I felt that it was a tougher game for me that it should have been if I'd handled

a reasonable move for W in this position, and how should I have played? It attaches to a weak stone, so should probably not be right, but it does lead to complications...

in a pro game (can't remember which one), so it must be possible in some circumstances. My impression was that its purpose was to build some thickness to the right. It looks wrong to me in this game because after something like Black a or b the thickness will overlap with what white already has and hence be over-concentrated. But I don't really feel qualified to comment since you're a few stones stronger than me... 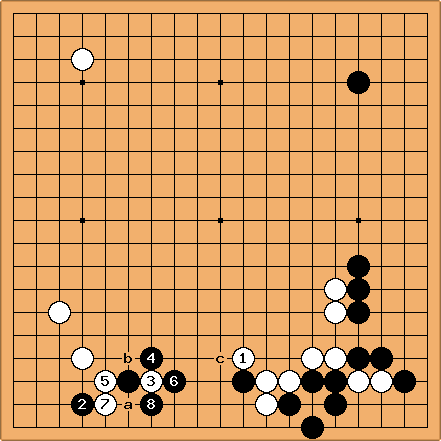 Bill: I don't really know what's best, but how about this line? After

I don't think that

would be good because of overconcentration. (Black will respond at a.) If

, White plays atari at b and the resulting fight looks disadvantageous for Black. After

Kitani and Suzuki's Small Joseki Dictionary says that this is an even exchange, but in this case Black's ponnuki is stifled by White's thickness on the right, so maybe this isn't so good for Black.

I don't know of anything better for Black, so maybe

is not so good. (Should