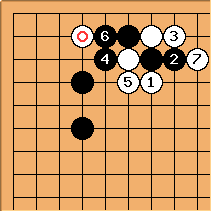 Dia 6. Black will play 4 and 6 here, cutting off the marked white stone and letting White get a ladder. Actually this is also good for White. Let's reveal the reason. 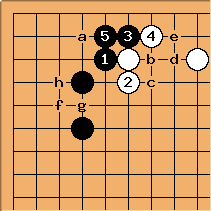 Dia. 7 The sequence from 1 to 5 here is quite feasible. Next, White plays 'a' and Black cuts at 'b', after which White sets up the ladder to 'e'. This gives the same result as Dia. 6. White has definitely settled his group, so he is satisfied. Black would like to think that White has suffered a loss of one move and one point by playing 'a', but that's not the way it really is. If White invades with 'f', Black 'g', White 'h', the white stone at 'a' suddenly comes alive. (... continues about ladder aji, and Black needs to look at it ...)

Tapir: I was really astonished upon reading this tewari analysis. Oya Koichi takes 3 white stones and 2 black stones from a joseki and proceeds to say that because the result is roughly equal the joseki is better for White, regardless of the number of locally played stones? And that

has some aji, does that make it a sensible move? What do you say?

Dave: Tapir, what is this page? It is not a "workshop" of any sort. It is not linked from any other page. It looks like it is just your personal rant about a comment you read in a particular article. You do not clearly say whether you disagreed with the analysis or simply disliked its lack of rigorous explanation. Frankly it looks like it would fit better at L19 than SL! :-)

Tapir: I am asking for other opinion, because I am obviously not comfortable with voicing rants on professional comments, but this one really made me wonder. I disagree with the analysis 1) because it removes an unequal number of stones without mentioning it in the analysis 2) because it exculpates the white stone at a when played in Dia. 7 by its remaining aji when it is in itself ridiculously placed. I am not sure whether the two bad sente moves by Black or the single bad gote move by White weigh more heavy, also I am not sure whether the initial position in Dia. 7 is to be considered even. I am not interested in rantings, but in learning how to do tewari analysis myself. PS. I often start unlinked pages to see if some fellow RC junkie is interested, if not I remove them silently some month later or move it to BQM. PPS. Black has 75% winning percentage in a small sample of 32 games in my database.

Bill: Oya is not really removing stones, he is permuting the order of play. The fact that some moves in the permutation are shown as numbered stones in the diagram while others are shown by letters is confusing. 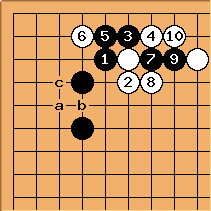 I think that this shows what he had in mind. Up to

play is normal. After that,

are bad. Black obviously still has some aji with the ladder. Oya's further explanation is about the aji of

. In his opinion Black's loss from

is worse than White's loss from

. Tewari when both sides have losses is difficult.

Tapir: Thanks. But wouldn't you figure in the number of stones played in comparing losses? I mean if White makes 3 moves and Black 2 in a given position, a loss for Black is to be expected regardless of move quality. And would you consider Dia. 7 an even position to start with? (It looks so good for Black.) So, I wonder whom to trust on this as it is related to the presentation on 4-4 point low approach high extension, slide, attach?/4-4 point low approach low extension, slide, attach.

Bill: Well, Oya did not claim that Diagram 7 was even, just that that sequence was feasible. When I was learning go, it was considered favorable for Black. OTOH, the previous generation of pros did not try too hard to avoid it as White, nor do they today. I do not agree with Oya, not that that matters. ;)

Tapir: I guess I underestimate the aji despite the article. But I will ask for third opinion :) 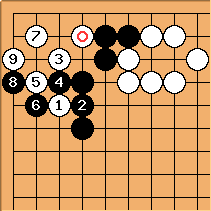 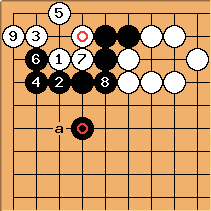 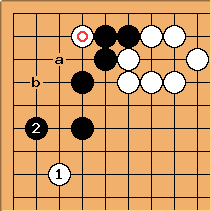