The side pattern discussed on this page is one of the rare patterns that uses the high approach to a 4-4 corner stone. Its use here in concert with a variant of the Large avalanche joseki was pioneered by Rin Kaiho, who played it against Cho Chikun in 1979. He played it 4 more times in the early 80's and a few other players tried it as well in this period. Of the 9 times it was played, it was succesful all 8 times when played with white, and only the game where it was played with black was lost by the player trying it.

With the Large Avalanche - Turn Outward variation in place in the upper left,

is part of a special plan.

, white creates an impressive moyo along the top. In some cases white skips the exchange of

. If black extends to a after

, white can expand the moyo along the top with a move at b.

is the last move of this variation of the avalanche joseki in the upper left, black will quite often choose to play a low extension from his stone in the upper right in order to neutralize some of the influence built up in the upper left. Playing this pattern therefore depends on black allowing it.

First use in a game 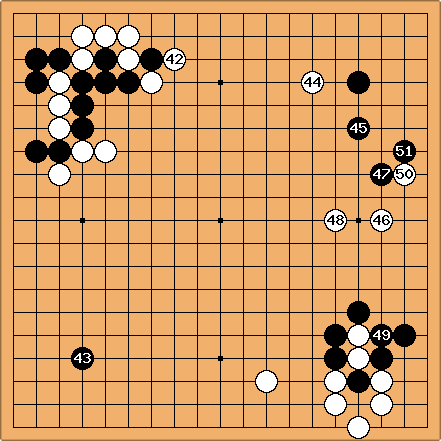 After White finished the joseki in the upper left with

in the upper right. With the moves

, white first establishes a position on the right side. 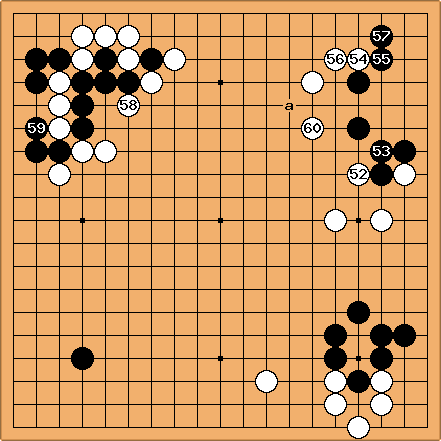 After stabilizing his stones on the right, Rin continues the joseki in the upper right with

, he has finished the pattern and built a large moyo along the top. In this game, Cho immediately invaded at a, and heavy fighting broke out. The black invasion dies on a large scale in exchange for a ponnuki in the center. When that fails to pay off, black resigns after move 150.