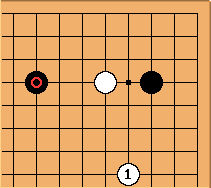 is the latest reply to Black's pincer

to have some sequences developed in pro play. 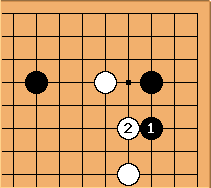 There are two standard answers to this moves (although in the early days tenuki seems to have been recommended, it is not a common move in current play). The first is the one-point extension to

is a way to make shape. 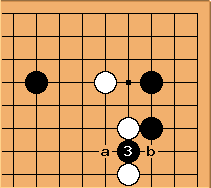 to give White cutting points is usual. White next has played both at a, building influence for a counter-pincer on the upper side, and at b for some difficult fighting (making this look like an unexplored joseki). 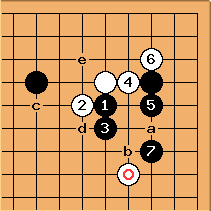 The other common answer is the attachment at

is joseki. White hopes that her marked stone will be more useful than one at b would have been. After

at any of c, d and e has been played.

Our databases are not large enough to see which of the two answers is the most common one. The attachment seems to be the older move, being played at least in the 1970s, while the one-point jump seems to be the 'survivor' among various variations being tried in the early 1980s. However, again the datasets are too small to be certain about that.

Uberdude: There's 35 pages about this move with some modern variations in Kim Sung Rae's 21st Century Openings Vol. 3 (in Korean).