Neil: In my play on internet Go servers, I've noticed that people who use territory scoring tend not to fill in the neutral points that are non-scoring. To someone still learning the game (like me, around 10k KGS), this laziness seems like a bad habit to get into because one doesn't always see the points that need to be reinforced.

As I play exclusively with Chinese rules on KGS, I know who these people are when the end of the game comes. They just sit there passing as I fill everything in. Just now, an opponent of mine nearly gave away a game by that habit: 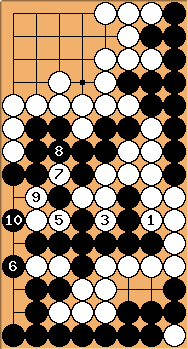 It turned out that my opponent was komonster at this very late point in the game, so he was able to make a trade that salvaged a 4.5 point win (tiny at our level!), but that was just "luck".

Sure, the pros leave stuff unfilled. Before this game I watched Cho U beat Yoda Norimoto in game 1 of the Honinbo final, and they left all the neutral points empty. There's a catch, though: They also made sure to reinforce the points that needed to be reinforced. They're good enough to instantly recognize what needs to be done. Beginner's aren't, so I think it's harmful for them to get in the habit of thinking they can emulate the pros in this way.

This is just another time when territory scoring has bad side-effects.

David: Another problem is agreeing which groups are dead. Pros can tell before you blink but what about us beginners. You cannot prove a group dead just by killing it after filling in dame, because you lose territory. This is a bit of a worry playing online, unable to communicate because of language differences.

Alex Weldon: At least at higher-level (low single-digit kyu and dan) play on KGS, I've noticed that people generally do not fill dame, except as a way of "signalling" to the opponent that they need to make a defensive move in their territory. That is, if I see a cut that he needs to protect eventually, I will fill one of the adjacent dame. Usually, the opponent will catch my meaning, and protect the cut. If he passes, I will fill another dame, and another, until he's forced to protect it, or until I can successfully cut and punish him for his stubbornness (very rare that he does not eventually protect, though). Once there are no more defensive moves necessary, I start passing, rather than waste time filling the dame.

But the real reason I'm commenting on this page is... What about the fact that if you set the rules to Chinese and they don't play dame they lose a point for every pass? Would you really take advantage of someone who probably forgot long ago that the rules are area scoring not territory to gain several points filling dame? All the people I played using area scoring on KGS have politely reminded me at the end.

yoyoma: Its different because filling dame is not necessary in most games on KGS since most people play territory scoring, so people forget if you have area scoring on. Atari is in all games, you don't have to say "remember, in this game we turned the relatively rare 'atari' rule on, so you better save your stone." :-)

mgoetze: In my offline experience, when playing territory scoring rules then all teire are filled before dame, and it is even slightly impolite to take a dame which forces an opponent to fill a teire, so you would play somewhere else first. Of course, offline it is generally necessary to fill all the dame anyway, to make the counting easier. (And BTW, I'm one of those people who reminds opponents to fill in dame for area scoring...)

Alex Weldon: My experience in playing over the board is that people will usually point out their own and opponents' teire, like "And we're done, I think. Just dame left." "Yup. I need to fill here though, and you need one there." "Yes, and one more here. Anything else?" "Looks good to me, let's fill the dame and count." The reason for "signaling" by filling the dame on the Internet is that it's slightly easier to convey the message that way than to type "You need a stone at A4." Well, that and also taking the time to type it out seems to indicate that your opponent can't see it for himself, whereas saying "Let's see, I need to protect here, and I think you need one over there," seems more like just being helpful, to me at least.

Rakshasa: If you didn't put in the game description that it was Chinese rules and didn't mention it otherwise, then i would consider it a form of cheating to take advantage of your opponent "forgetting" to fill the dame points. Almost all games online are with Japanese rules, and not everyone checks the ruleset before challenging. Kinda like how some put insane time settings without marking the game as blitz.

Neil: Let me know when you decide whether you're calling me a cheater or not. I'm surely going to have trouble sleeping until I find out.

Rakshasa: Well, are you one of those who put up Chinese rules games without putting a comment in the game desc and then not saying anything when the endgame is over and you're filling in dame points?

ethanb: I get around this by playing the way I would in a tournament (filling in all dame by turns) unless my opponent passes first, in which case I just assume it's not Chinese rules and pass as well :)

DougRidgway Some quotes: "When using territory (Japanese type) rules, continue playing alternately until after all the neutral points are filled." (Matthew Macfadyen, 6d, British Go Champion). "Filling a liberty is never meaningless." (Robert Jasiek, 5d) Somewhere I read that Japanese pros got more careful about dame after Ryu Shikun threw away a won game in the 26th Kisei final during dame filling.

kokiri: if you get to the scoring phase during an internet game without anyone resigning it means you aren't being aggressive enough ;-) On Saturday I played a game with a Korean 5 dan and he started to score the game using territory scoring _without_ filling in the dame. It was a little bit confusing as i was worried about messing up and, frankly, i wouldn't recommend it.

if you're not filling in the dame at the end of an internet game you do have to be careful to check where fill ins are necessary; I've had a few games mis-scored by a point or two due to that.

Rakshasa: In an internet game with territory scoring i *never* fill in dame points that does not require it. It's imo a waste of time, and it's good practice to force yourself to look over the board and find all places that both you and your opponent needs to protect. If you've missed it until only dame points are left, then you didn't look hard enough during the game. ;)

Bill: Because the Japanese '89 rules define seki by the presence of dame, when they came out I started playing out all the dame and teire. I cannot tell that it slows down the game noticeably, since you have to fill dame for scoring, anyway. I was surprised to hear that doing so had not become professional practice. <shrug>

Neil: Well, on the IGS broadcast of the game I was watching, they didn't appear to. Those plays might just have been omitted from the broadcast though.

Bill: The official commentary on the rules allows dame to be filled informally, if neither player objects, and does not regard filling them informally as plays. So professional practice has hardly been affected, it seems.

Hicham: I always play with Chinese rules on KGS. The reason for this is that i like them better(more logical if you ask me) and that KGS sometimes makes small mistakes when you do not fill in dame( gives a point when you should connect there when all dame are played). Most people don't notice this and just lose or win a point. But the problem is that I generally have to remind people we are playing Chinese rules, and that they have to play dame. I always offer them undo for this, but I find it very irritating if they just ignore me and keep on passing. I mean checking the ruleset is the responsibility of the player who accept my settings I would say.Especially Japanese players have a hard time getting over the fact that they have to fill in dame. Calling someone a cheater because they play with Chinese rules seems very rude to me. I once had this problem in a handicap game where I played with Chinese rules and my opponent started to complain after the game that Free handicap placement was cheating.

Harleqin: I usually play with New Zealand rules. I also state this in my game offer. At the end of the game, I just don't pass first (unless there is no point left). If my opponent passes first even though there are points left, he may or may not have lost one point due to his carelessness. I also just pass then, because playing on would be speculating on my opponent passing more. Grabbing further points this way would be against my sense of ethics, and I don't want to build resentments against myself or my favorite ruleset.

mistake: I usually do the same as Harleqin, but sometimes you can't because you would actually lose points doing so. This happens when your opponent passed before filling teire.