Sunjang Baduk is one of the forms of Go, which was common in Korea through the 16th century and into the 20th century.

The first 16 moves are prescribed and Black makes the first free play usually at tengen. There are not enough specific records about komi in Sunjang Baduk, although komi of 4.5 was used in the mid-20th century.

The opening leads straight into a fierce middlegame. Perhaps this is why the character of Korean players is the way it is. The other main difference lies in the way of scoring. After all plays have been made, as many internal stones as possible are removed, leaving nearly continuous boundaries. Then the totals of territory controlled are counted, with prisoners ignored. (source: the Hankuk Kiwon Guidebook) 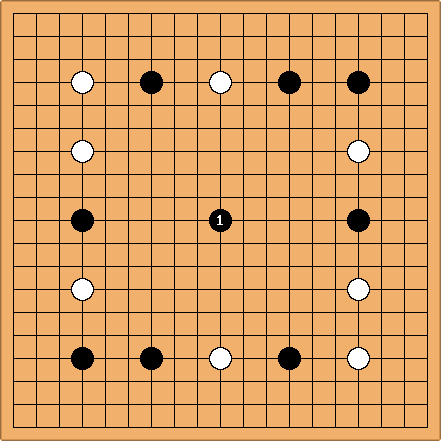 The final borders cannot contain any stone in atari, but may contain cutting points. They need not be continuous. Points are not counted in seki.