DaveSigaty: I searched for the following pattern in the July 2002 GoGoD CD which has 17,000+ games. Note that it is a staircase with one empty row on all sides and no relation set to any side or corner.

The search returned a little over 2400 matches in 2269 games from the middle of the 12th century through 2002. Five of the continuations occurred over 100 times. The results are shown below:

Bill: Dave, I have a question about the search pattern. The frequency of this play surprised me, since it leaves Black with 2 cutting points while eliminating White's. But it would make more sense if, for instance, there were a White stone one point left of B 1. What happens with a larger window, such as pictured here? Thanks. :-)

Dave: There are only 21 hits when the search is expanded to include two empty rows surrounding the staircase. Only two of these are the atari. Even I wouldn't claim that this tells us anything :-)

Bill: Thanks for taking a look, Dave. :-) I agree, 21 examples is not enough to draw much of a conclusion.

The solid connection occurred 359 times, the fourth most frequent choice. Black won only 49.6% of the games while White won 47.9%. This is the lowest winning percentage for Black among the major continuations.

The double hane is the last of the significant continuations. It occurred 209 times. Black won 58.9% of the games while White won 38.0%. This is the highest winning percentage among the major lines.

Based on the above (admittedly superficial) analysis. Players faced with the staircase should consider all choices. The double hane is the most aggressive choice and has produced the highest winning percentage but it is the rarest among the major lines. The solid connection has the lowest winning percentage by a slight margin and it is only fourth best among the major lines.

Any of these continuations may be best for a given situation. All of them have produced a significant number of wins in top-level professional play. At the same time, however, there does not seem to be any support in these statistics for the claims on staircase and Hane-kaeshi follow up that playing solidly should be considered first or is "good style" in any general sense.

Dieter: I find this extremely interesting. Could you extend your previous analysis of the cross-cut in the same way ?Thanks a lot Dave.

GeorgMischler: I think this kind of statistic is very misleading, as it doesn't take into account the reasons why the position came into existence at all. Why does the solid connection give relatively bad results? Maybe because it is most often played when the first hane by b already was an overplay? And why was the overplay chosen? Maybe because b was already behind and had no alternative but to try an overly aggressive tactic as an emergency measure? The same goes for the cross cut, when seen from whites perspective. Would w chose to establish a staircase position while being ahead, even if the cross cut by b had good chances of working? (Of course I'm not saying that it isn't fun to look at those figures anyway... ;)

DaveSigaty: But I would counter that all generalizations suffer from the same weakness. The reason that I think the search results are interesting is that they challenge certain "wisdom" on the subject with a list of 2400+ examples (too long to reproduce here :-). If you want to understand how the staircase is used and how it is countered, here is a vast library of actual practice by the pros. If instead you want to keep in mind some "rules of thumb" to help you deal with the staircase in your own games, I would recommend choosing rules that at least do not run counter to actual practice. ;-)

Bill Spight: I would place more emphasis on the frequency of professional choice rather than winning percentage. It seems highly unlikely that the game hinged on a single such play. Besides, for each game we cannot compare the result of the played alternative with any that was not played. All we have for direct comparison is the expert choice. Besides, for choosing a play in a game, all of these alternatives should be considered.

As for the solid connection, it is the kind of play that kyu players tend to overlook. They see the ataris easily enough. ;-) It is good style in the sense that the people who play it tend to be good players.
Dave: But on the other hand, looking at the frequency stats we have to say that good players tend not to play it, right? ;-)
Bill: Yes, indeed. :-)

GeorgMischler: I see that the frequency of a play can reveal interesting insights, although maybe not those that seem obvious at first. Is the cross cut really better on average? Or are strong players less likely to be afraid of plays with complicated continuations? Or will they simply provoke the staircase position less often when they already see that they'd have to connect later (which they may consider too slow)? Well, even if we can't take those figures at face value, they definitively raise some interesting questions... ;-)

Dieter: Just an idea to explain the apparent contradiction between conventional wisdom and professional choice: Suppose the solid connection is the best, natural reply, say the basic instinct. Then a player will be reluctant to have his opponent play the solid connection. So, he will play the double hane only in those "rare" cases when the natural reply is not so obviously better than the others, leaving a higher degree of uncertainty. It is probably characteristic of professional play that they push each other to the limits, not leaving room for natural play.

In this light, what would probably be really significant is a database of pro-amateur games, say simultaneous, and look at the pro's reply to the double hane.

Let us consider the staircase that usually appears as one of the variations with hoshi approached by keima kakari. 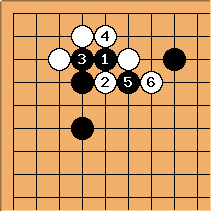 White has an exit to the center. Black has been cheated by White's staircase. It is only because this natural connection is bad that White provokes a fight with the staircase.

Stefan: Is it? What if the pro is reluctant, but doesn't have a better move? And isn't it also conventional wisdom that pros look for sequences that give them an edge, but often play sequences that are even?

NickGeorge: Stupid question: Do those winning percentages not include komi? I don't see why black would have the edge otherwise.