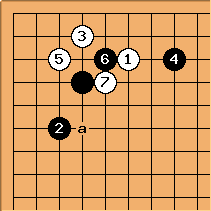 here, giving an example of the staircase shape, is one of the most surprising joseki plays. It is seen also when

is played at a. 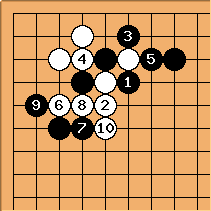 There are many possible lines in the books, but in this case a standard continuation seems to be current, as shown here.

is to avoid being shut in. In this case playing atari in the staircase formation turns out better for Black than connecting solidly at 4. 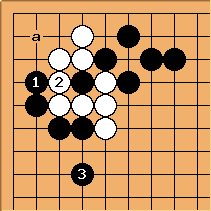 , Black develops on both sides and White looks overconcentrated while the corner is still open and there are no definite two eyes yet. 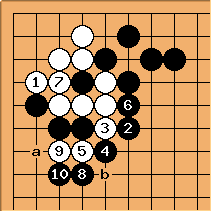 will surround and sacrifice for central and side influence. 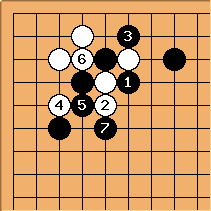 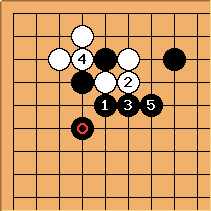 on the fourth line, there are some trick plays possible if Black connects. Top players have continued as shown with Black, playing for central influence.

Charles Matthews (with some edits by emeraldemon)

Lee Sedol showed off a new variation in the 8th Chunlan Cup final versus Xie He : 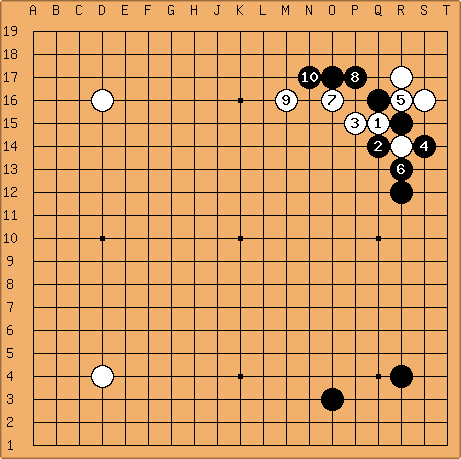 is the new move. Comments here:

HolIgor: One should remember that

is ladder dependent. If Black has a ladder breaker in the opposite corner, White could end up with a very bad result.

Han: According to Get Strong at Joseki 3, page 42, white can play 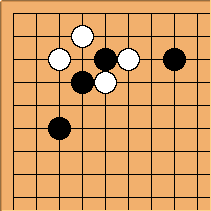 SnotNose Let's be explicit. Black to play. Where is the ladder? 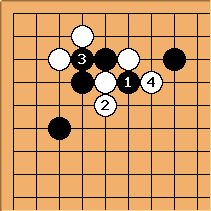 Han Hi Charles, if the ladder starting with

does not work for white, white can play as shown in the first diagram from krit below 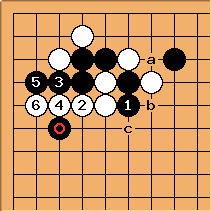 Black needs another protective play in the corner. White might sneak a ladder break in at some point along the way before black can play a, b, or c. The corner is large for Black and White has played somewhat inconsistently, first diving into the corner and then sacrificing a lot to get a wall on the outside. White's outside wall is not so thick,

along with a black play at c might give white some things to worry about later. 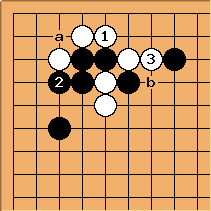 krit I believe white plays at 1 first, then black 2 white 3 then black can choose between a or b. 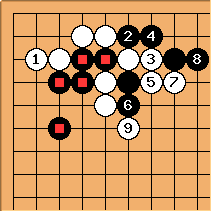 so IMHO if White still insists on having the corner, by playing 1 in place of

in the previous diagram, Black can cut at 2. If ladder is good for White, the Black cut of

is not possible; White gets both outside and corner which is very good. When the ladder is not good for White, white is split into two groups in the centre. Are marked Black stones in danger? I think not if one of the White groups is captured first so both sides need to be careful in the fight. Maybe a stronger player would like to comment on my variation. 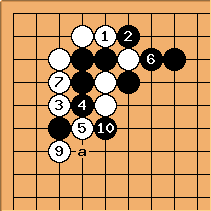 Han Hi krit, I am not a stronger player but I would like to comment on your first diagram by giving this variation where black plays

to the right of