The no. of stones of smallest groups should be...

aLegendWai (Contest Sponsor & Organizer): Good news! There are a lot of submissions relating to the contest of "Unbelievable! The super-smallest group that lives!)". The final result is released, arranging from the lowest to highest ranking. Although this contest is of little (not to say no) help with your Go skills, it is surely interesting to read. :P Enjoy!!

Robert Pauli: Minimal eyes would rule out this case too.

Under (unofficial) "can't escape = dead" rules the white stones in the almost filled eye are dead, that's the problem. On the other hand, Black neither can convert his group to two minimal eyes (including the big eye!). So, it seems more appropriate to regard the whole thing as seki. This suggest to define "having two eyes" as being able to form two minimal eyes . . .

Dolgan: this is not a seki, because black could just capture all white stones and live. But the diagram doesn't qualifiy as "Two eyes"...

???: Currently all entries are for a "big" rectangular board. Taking a smaller one cuts the number of stones needed. The minimum is one stone in the center of a 3x1.

Robert Pauli: Hmm, thought I made it clear (BTW, thanks for watching me, Bill ;--), but what about

LCZLAPINSKI: No, since the 2nd liberty is not surrounded by one color. At game end under Japanese rules, white might argue that the white group is alive since after black plays white can place a living stone.

Dieter: One thing is sure: White is in atari.

sIG: Well we're talking about black shapes here, there it is white who has the suicide "shape".

Should we restrict eyes to be minimal at the top ?

Bill: That's an interesting rules question, Robert. ;-) By J89 and my rules, no. How about by yours?

Robert Pauli: No "control" for Black if White can make seki or two eyes after Black's capture: Black should capture before end!

But the question remains, "minimal eyes" ?

Dolgan: Black wouldn't accept this to be seki. Simply taking all white stones will help him to surely win. If you accept my argument we can form a living 2 Stone group:

Warfreak2: If you give White one one-space eye, then it is a proper seki.

???: Seems like two eyes. And the situation is exactly the same as in "normal" two-eyed groups: white can't play any legal moves, while black could play but decides not to. So I wouldn't agree to a seki here.

unkx80: This is my tongue-in-cheek answer. =P aLegendWai: unkx80, you are awarded the ultimate crown of God of Go?.
The prize of this award is you can define what God of Go? is, including its Go power and skills. I know the prize is not really fantastic, but I don't get commercial sponsors for some material prizes.

Bisqwit: Black cannot play a because of ko. Black passes. White passes (because she has no valid move, barring suicide), and the game is over.

praythuong?: If player A to play first, then he will pass. If player B pass too, game is draw. If B puts his stone, then A will win as discussed above. Therefore, the player to play first is always draw or win :)

Bass The white stones are dead, and the 0-stone black group is even Benson-alive

Anonymous: Black has -1 stones, because the opposite of black is white.

Below are some small live groups that must be defended against attack to stay alive.

aLegendWai: Your discussion is interesting. Instead of deleting it, I parked them at discussion sub-page. Happy with it?

6 stones, 6 different eye shapes, 7 different stone shapes --Xingta: Shouldn't the last three examples really be 7 stone shapes even if they are alive with 6. The last example has a false eye too - how does that work?

8 Stones but 4 different eye spaces. Anonymous: Does this really count as an 8 stone group? White has a ko threat at "a" inside the group that he will play eventually, making this a 9 stone group for black. Ian: My guess is that there is no point in playing a stone inside this group. Black will respond by connecting and have 2 eyes.

Ellbur: I don't think that groups which can be threatened to add a stone or stones should be included in Smallest Group With Two Eyes, as this could be extended to include a one stone living group: one lone stone on the 3-3 point.

Alex Weldon: Well, it's ambiguous, because the page title says "smallest group with two eyes," but some of these groups have one large eye (big enough to make two eyes) and some have two eyes, but (at least) one of the eyes has a ko threat against it, so the group is not unconditionally alive. Maybe a better title would be "smallest pass-alive group" (unconditional life is also ambiguous, because it's sometimes used to mean life without ko in a life & death problem, regardless of whether ko threats remain). Either way, a single stone on the 3-3 point would not appear here, because all of these groups are completely surrounded by the opponent. Clearly, a stone on the 3-3 point is not alive under those conditions.

White is alive by superko (but has no eyes?) Here's a little python script to generate such a position. Great for testing the limits of your favorite sgf file reader: 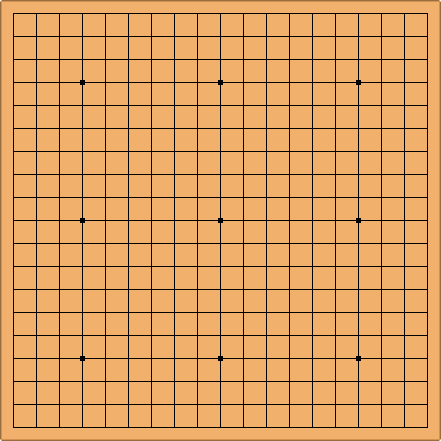 All of the 0 stones are alive. Or can black kill all virtual groups with tengen? ~srn347