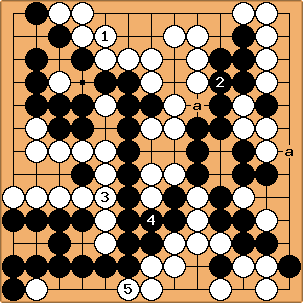 Dave: For me this is an interesting problem. I solved the problem by exhaustive search from here. From what Bill and others have written elsewhere I expected the right answer to be

but the only way to prove it was by trying all the other plays. Naturally this is not useful in over-the-board play unless you have an unusually understanding opponent :-)

For me there are two interesting (challenging) questions here:

Bill: I edited the original to make it sensitive. ;-)

Arno: I think an easy rule of thumb is that the points a do not have any follow-up plays, whereas

has follow-up plays and thus is "larger". See Bill's CGT pages if you are brave enough (e.g. on corridor infinitesimals).

Bill: As for reverse sente, tradition also says that the sente player has the privilege of playing the sente (as a rule). There are times, OC, where the reverse sente is the only correct play, but they are infrequent. 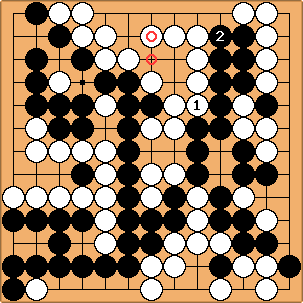 Here one White stone has moved. I think that White has time to win even by playing

is not enough to create tedomari. 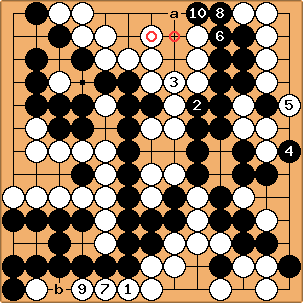 Here a different stone has moved.

is not enough to win since

and settle for the draw?

Arno: here the situation is different insofar as the mutual damage created by the moves

is in favour of Black as a move at a is more damaging than a White play at b. That's why this becomes jigo.

is not enough to guarantee a win, I think that it is both technically correct and good psychologically. Black could make a mistake after 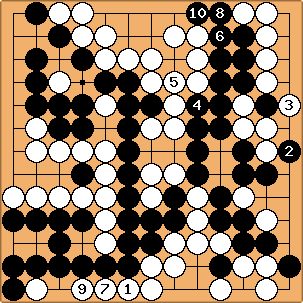 Bill: It seems to me that there is an analogy between a fight for the last play and a race to capture.

are like filling external liberties. Each of them takes away a potential last move from the opponent. If the opponent plays there she takes away her own potential move or moves. Finally in the bottom left we reach a position where each player has one move. Taking away the opponent's potential move also takes away your own. That is like a shared liberty in a semeai. You wait to make those plays.

On the top side we have reached a position where White gets the last move. The only question is whether it is as reverse sente or as a response to sente. Black with the move can take away White's play for free.

Whoever has the move after

in the original diagram, each player has 3 of them.

We cannot predict from these numbers who will get tedomari. Curiously, you need an advantage of two to ensure getting it. But being aware of them simplifies the reading. We can fast forward to the critical position.