Arno: I am just reading Redmond's "The ABC's of attack and defense". Talking about double approach moves, the following position arises: 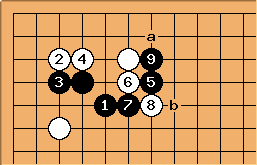 Redmond next gives the line starting with a and discards playing at b: 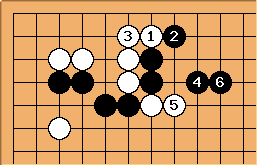 After making the corner solid with

and Black makes the thick move of

, so that White has no more forcing moves from the outside which could help the two white stones. Next the fighting turns to the 4 black stones on the left. 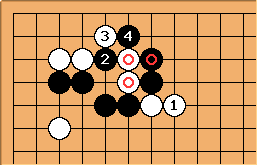 or any other move from the outside is bad, because Black can capture the

stones. This due to the fighting move of

which robs White of the necessary liberty.

But what about the following line? 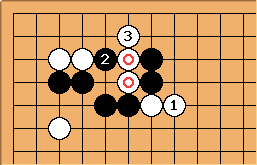 No matter how hard I think I come to one of two conclusions:

So what to do next? 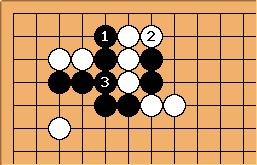 Bill: Isn't this good for Black? 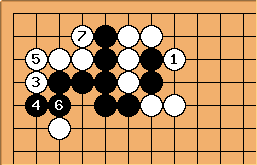 tenuki, White can still live in the corner. I don't think that this is good, is it? If it is good, then my assessment (option #2 of my question) is off. But I like to be corrected :-)

The reason I think this is bad is that after

if Black invests another move in the corner (

?) to make sure it is indeed dead White can play somewhere down the left side and has established a foothold there too that nullifies Black's thickness. On the other hand White has nice influence torwards the right. 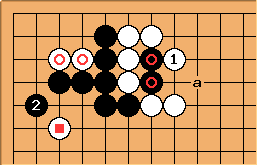 stones look like mochikomi to me. As for the

stones, Black still has a kikashi at a. In addition,

has, in effect, approached strong stones, and is quite weak.

Charles Always try to argue with pro 9 dans about joseki ... not. 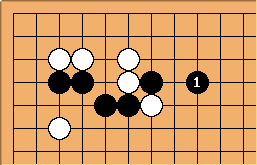 Actually, looking at real games, it is

here that they play, in the absence of any pincer.

If there is no pincer, then Black should not be getting a very acceptable result here. Modern thinking seems to be that the diagonal move

in the first diagram is OK; but I really wouldn't recommend it, as a teacher.

dnerra Without any pincer, Black usually tenukis after the diagonal move and White's 3-3 invasion. This is more flexible, as Black can decide later on which side to block, or just to jump out with a two-space jump from the diagonal move. If one understands that this is mostly about flexibility, then I might think it can well be recommended.

Charles I wouldn't be trying to teach anything to anyone who understands that much about go ...

Bill: I believe that Maeda came up with the idea of kosumi - san-san - tenuki in the '70s. 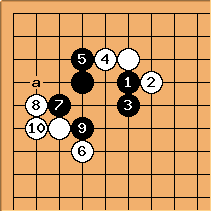 This is very old joseki. Black takes the corner here, with some aji; White develops on both sides.

With this as reference, I think White's loss in Bill's 'Good for Black' diagram may be clearer.