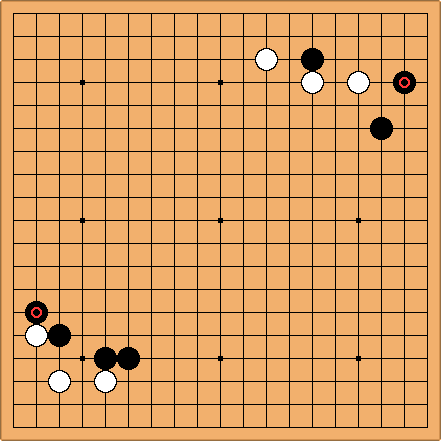 I played a game today against a 3dan. He played two odd corner sequences, one starting from a 5-4 point and the other starting with a 4-4 point. The two

stones are non-joseki moves; in the post game discussion neither me nor my opponent managed to come up with very effective responses. A database search didn't produce anything insightful either (the move in the 5-4 point sequence is found once in GoGoD, the other one not at all. 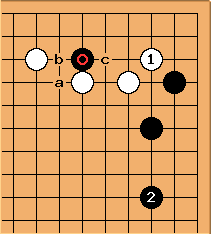 This is how we continued in the upper right, but

has more aji than in the more common sequence where Black exchanges a for b.

Dave: Better to ask what is the "more aji" and whether it is worth more than giving up the 3-3 point to White in gote? I think White plays away here and is very happy with the situation. Whatever happens later will be more fun for White than Black.

Bill: That was my impression. However: 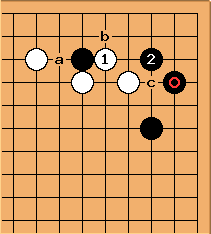 Black threatens Ba with the connection at b for backup. White has bad aji. White has the same problem when

is at c, as Jiang Jujo and Rui NaiWei point out in New Joseki Around the World (Sekai no Shinjoseki), part 1. 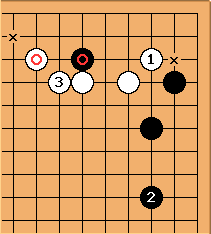 ? It looks slow, but White is thick and 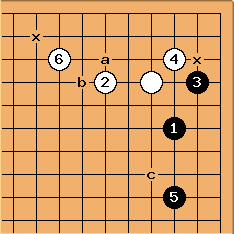 Klaus: but in the usual joseki,

here is not an interesting move, because white is already stable, so if the exchange a for b would ensure white playing

this is fine for black! What is worse for white, the captured stone might still be useful in combination with a move at x

Dave: Your analysis is based on the idea that White will answer a with a play at b. To my eye this order of moves lets us see that the play at a is very odd. Why should White answer it directly? If White plays at all, how about starting at c to see how Black will answer? It is likely that White can trap a on a large scale, making it a wasted play.

Klaus: sorry Dave, but someone messed with my diagram here: I never had

in it !! (I changed it back) My argument was: In the Continuation A1 diagram, white has been pushed arround, because, 1)

is a questionable extention in my diagram (

here) and 2) b is not the right answer to a, if black played here now. In any case, you seem to agree with me, that

in bill's diagram is a mistake.

Dave: I agree about the follow up at b. Your idea of reordering the plays is quite interesting here. However, "comparing" the situation without the black stone at a is incorrect tewari in my opinion. The position with the Black stone at a but without b is the actual game continuation and the basic issue for this page. The question is, "What is the assessment of this play at a and what next for White?" 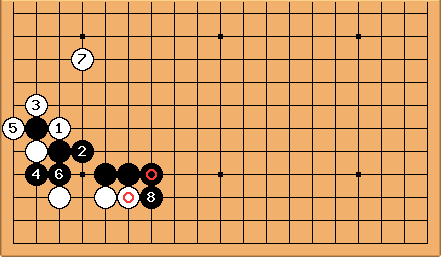 Bill: Suzuki and Kitani's Small Joseki Dictionary gives this crosscut in a similar position to the one in the bottom left corner. White is probably better off not having made the exchange of

before giving up the corner. Charles Played in a Korean game from 1995, with

Bill: Suzuki and Kitani mention that crawl, but it's not available in the question position. (If

in that position, surely