After the game all stones inside a player's area are removed, except the stones that form its boundary. No stone in the boundary can be in atari, but there can be cutting points. The surrounded open points are the territory. No points are counted in seki, however, and prisoners do not count. 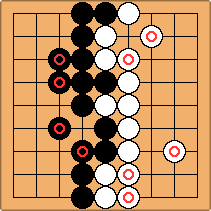 The marked stones are removed, leaving the boundaries. 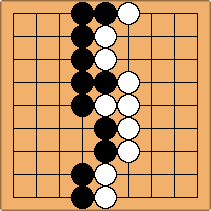 Note that, unlike Japanese scoring but like Chinese scoring, a play inside one's territory costs nothing (OC, there may be a better play). This means that almost all questions of life and death may be resolved by play, greatly reducing the necessity for special rulings.

But territory scoring is, in general, sharper than area scoring. For instance, by Japanese counting Black may have only one option that wins by 1 point, while another results in jigo, but by Chinese scoring either option is just as good, because if Black ties in territory, he will get the last Japanese dame and still win by 1 point. See the examples in the pages Japanese Rule Sharpness and Chinese Rule Sharpness.

There is no direct comparison between Korean and Chinese scoring, but Korean counting retains the sharpness of territory scoring. It is easier to make a misstep. 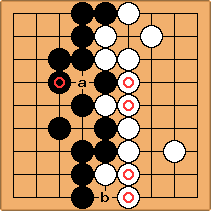 By Japanese scoring, the ko at a is worth 1/3 point by miai counting, and b is just a dame, worth 0.

Korean counting usually comes in between the two (inclusive):

If Black fills the ko at a, the marked black stone is removed and that point becomes territory. If White takes and wins the ko, the two adjacent marked white stones are removed and become territory. The difference between winning and losing the ko is thus 3 points, and the ko has a miai value of 1 point.

If Black plays at b, the two adjacent marked white stones are part of White's boundary, but if White plays there, they become territory. The miai value of a play at b is also 1 point. 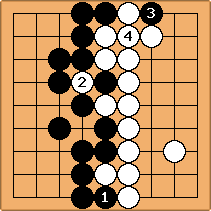 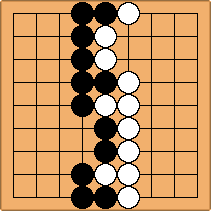 Black has 29 points of territory, as does White: Jigo.

I have taken the liberty of numbering Bill Spight's diagrams. I am trying to understand miai and deiri counting etc. -- sounds interesting, but i'm having trouble getting a handle on it. Anyway, here's my question: With this Korean Sunjang Baduk counting -- in diagram 3 above, if Black fills the ko at a, is it not two Black stones that are removed (and their points become territory) -- the marked stone, and the one above it? Whereas, if White wins and fills the ko, Black gets neither of those points as territory? Does this make the difference between winning and losing the ko 4 points, rather than 3? Or am i completely confused about this? Thanks, - TakeNGive 10k

I find Korean counting confusing, too. :-)

In the following diagrams, for simplicity I have let Black have the play at the bottom. 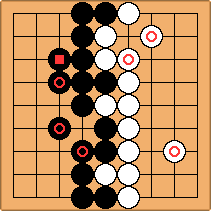 Each player has 29 points, for jigo.

Next, suppose that White wins the ko. 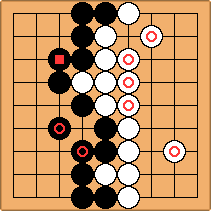 stone in the above diagrams is territory either way.

Ah. It becomes territory either way. Thanks, Bill.
- TakeNGive 11k

luigi87: I don't understand why there can't be stones in atari in the counting position. Then how is this counted?:

Both players must pass in this position, and the ko can't be filled with actual play. I guess it isn't filled afterwards, either, as the rules don't say anything about adding stones to form the counting position. In my opinion, it would be more natural to leave the stone in atari and score it that way. Not scoring points in sekis is illogical, too.

If those two changes were made (allowing stones in atari and scoring points in sekis), I'd say this scoring system is about as good as area scoring. Bill: Black is dead, so Black 1 is not a boundary stone.