This page aims to provide a simple position in which Chinese Rules are sharper than Japanese Rules, where (as indicated in the article Sunjang Baduk Counting) a rule set ``R`` is considered sharper than another rule set ``S`` in a certain position if fewer moves are optimal in that position under ``R`` than under ``S``. 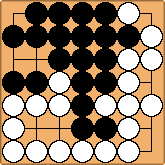 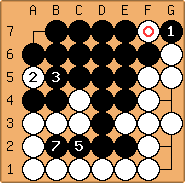 , but it is correct in this case to play it first, to force White to win the ko. After the ko exchange, 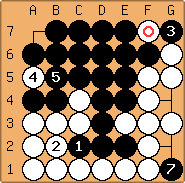 Because White is komaster of the ko, White can fill the dame with

, effectively getting the last play. The empty point at 3 belongs to White. White wins by 1 pt., 2 pts. worse for Black.

RobertJasiek: What does "sharpness" in the page titles mean?

PJT: This question presumably refers to the title of this page and of Japanese Rule Sharpness.

Bill: Maybe the original author will let us know.

[ ]: it is from Sunjang Baduk Counting. See paragraph containing link to this page.

[ ]: Considering what sharpness means here, one can create a counting system that says "its a draw". This would be "not sharp" or have a sharpness of 0 as all moves lead to a draw. The claim that one out of area and territory counting is sharper may be based on the idea that there are more board arrangements where playing differently causes a change in the result when using one system than there are when using the other one.

[ ]: The smallest change when using area counting is two points. (OK, one point if we're looking at some lengthy sequence where one line leads to a draw involving a seki with an odd number of dame, and the other a one point win (see One Point Area Scoring Swing)). Regarding the ko positions, they were the easiest I could create. It is not simply a matter of the mistake costing x points, it is also then when the other counting system is used, the mistake costs 0 points. The Japanese Rule Sharpness page is an example of "...by Japanese counting Black may have only one option that wins by 1 point, while another results in jigo". The Chinese Rule Sharpness page is an attempt to create the same situation by Chinese counting, although it doesn't quite succeed because of the minimum 2 points swing and the difficulties in arranging a jigo.

Bill: On an odd parity board, with no komi, it is not at all difficult to construct a position where Black to play loses 1 pt. by a mistake to get jigo under Japanese scoring, while the same "mistake" costs nothing and is a 1 pt. win under Chinese scoring, because Black gets the last dame. That is an example of the condition in your final sentence.

[ ]: the Japanese Rule Sharpness page provides such a position. If you have a simpler example then to provide it would improve the page.

The example on this page does the job

Bill: Well this page has an example of how the mistake under Chinese scoring, which loses 2 pts., loses nothing under Japanese scoring, because the ko loses only ⅓ pt. by the temperature drop instead of 1⅓ pt. (Black does not play