Whether you study the theory of capturing races or not, one proverb remains very valuable when involved in such a race: fill outside liberties first. 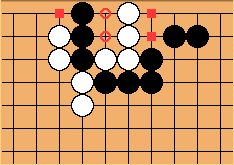 However, not all capturing races are that clear-cut. Sometimes what looks like an inside liberty turns out to be a move that generates more outside liberties, thus winning the race. See diagonal to the first line.

It seems to me that all of these spots are "shared."

There may be something obvious I am missing ... 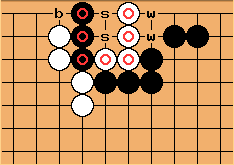 Perhaps the definition is a little bit vague for you? If we consider the

chains, then the outside liberties for the

chain is marked b, then outside liberties for the

chain is marked w, and the inside liberties (or shared liberties) of the

Geoff Wedig: Yes, you're missing something: a key fact from the definition. The 'outside' and 'inside' refer to the groups that have potential to be captured. Other groups are part of the surroundings. That is why the squared points aren't inside liberties. They aren't shared by the (potentially) capturable groups.