Chinese counting can be used for rules that define scoring by area. As a reminder, in area scoring, your score is:

1. Determine which stones are dead,[1] according to the rule set used.

2. Note your territories: They are the empty points surrounded entirely by your living stones.

3. Remove all dead stones from your territories. These can be placed back in your opponent's bowl.

1. Now you want to make the empty territories you surround be multiples of ten points. To this end you can simply remove stones of your color from the board and return them to your bowl. You can also take stones from your bowl and add them to the board.

2. Make a note of the number of empty points. This should be a nice round number, a multiple of ten.

Some people place one stone for every ten points on the table, up against the board, as a reminder.

3. Now count your stones. At this point you can destroy arrangement of stones on the board and simply clump the stones into piles of ten.

5b. If it is a handicap game, add the number of handicap stones to White's score. (Subtract it from Black's score if counting Black)

In practice, only Black's score needs to be counted. This is because in area scoring, after the dead stones are removed, every point on the board is either:

There is a Chinese counting example with step-by-step diagrams. 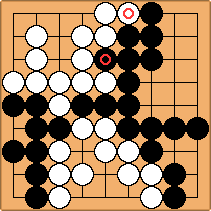 We can interchange the

stones to create a 5 x 4 = 20 point empty space for White on the upper left corner.

[1] Under area scoring, dead stones are usually determined by agreement, and otherwise by playing it out, but details on this vary between rule sets. The word dead may not always be the most appropriate word to describe the stones to be removed, see discussion.

[3] For example, shared liberties in seki.

Anonymous: Question: How do players using Chinese counting rules estimate the score during play? Counting territory seems easy to me, but if the players are not keeping captured stones separate and visible, it becomes more difficult. Counting the full territory and stones, even of just one color, would seem even harder, but perhaps that is just because I'm not used to it.

Your score is the total of your territory and your living stones on the board. You can estimate your score during the game by keeping track of the difference between your number of living stones on the board and your opponent's and the difference between your territories. If you don't need a really accurate estimate you can use the Japanese count because it only differs from the Chinese count by one point or so.