No Eye versus No Eye Capturing Race

When both parties involved in the capturing race (semeai) have no eye, the fight is calculated as follows.

1. Fewer than Two Inside Liberties

There are 4 outside liberties for White (marked a) and 4 for Black (marked b). There is no inside liberty.

The player who has sente kills the other.

There are 4 outside liberties for White (marked a) and 4 for Black (marked b). The circled point is the only inside liberty.

The player who has sente kills the other.

Black goes first to give atari at 7 and capture at 9. Of course, White should realize this and keep 2, 4, 6 and 8 in reserve as ko-threats. 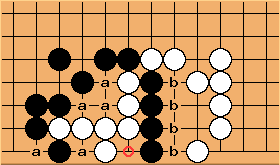 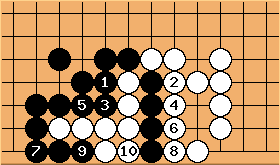 So, Black should keep 1 to 9 in reserve as ko-threats.

2. Two or More Inside Liberties

If there are two or more inside liberties, seki is possible. The group with more outside liberties is alive. The threshold for the other group to live in seki is:

If the numbers are equal[2], then sente decides whether the defender can make seki or the attacker can kill. If one number is larger[3], the status is settled as seki or death. The oddity in this formula is that the attacker counts one of the inside liberties for himself.

GigaClon I don't quite understand this section could some one post a diagram?

where Δ = F is the critical (unsettled) case where the attacker must move.
Which side is the attacker is determined first by comparing eyes: the side with the weaker eye must fill the shared liberties. Any eye beats no eye, all small eyes are the same, big eye beats small eye, and bigger eye beats big eye. If the eyes are the same, the side with more exclusive liberties must attack.
F is determined by the eye of the defender. F = the number of shared liberties S if the defender has an eye, or F = S - 1 if no eye.''

The groups in the following diagrams do not have eyes => F = S - 1 (S = IL), because White = the attacker must have one liberty (to avoid self-atari) while putting the defender in atari
F = IL - 1 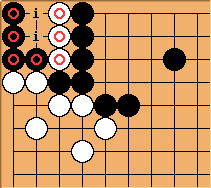 Δ < F means that that there are too few liberties (e.g. OLw, OLb) to win the fight! 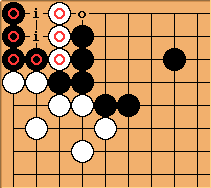 Δ = F means that that there just enough liberties - for either side - to win the fight! (capture / seki) 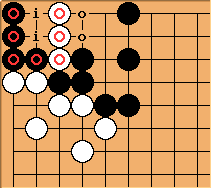 dia. [7]: Δ = 2 ; Δ > F means the attacker (White) has more than enough excess liberties to win the fight. Here Black would waste his sente by adding o, it would not alter the outcome.
White can

tderz: Question w.r.t these edit hotspots on the right side of a Senseis page: their position is decided by what?

Are they created automatically?

unkx80: Yes, at the start of every section/subsection, marked by lines starting with a "!".

Thx for the info.

See also the pages in the Eyes Collection.

[4] inclusive all approach moves, hence not only physical ones.