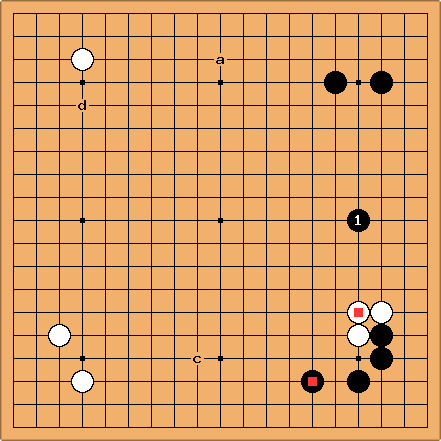 I believe that the only two options are b or d. My initial gut feeling was that d was the correct move, because it split the white side, and if ignored left potential to be exploited.

However, at second glance, b looks better, as it puts some pressure on the white group on the lower right side and extends from the IkkenTobi in the top right.

Yet, white could still simply extend down and then potentially get an eye to start running with. However, that running might help black build up a moyo on the top too much.

What is the appropriate way to engage white?

Jasonred Hmmm, I'm guessing that b is best, cause "it is too big to be ignored" and a defence of it will at the least, I'm guessing, end up with a nice group for black to expand and cause chaos with, possibly a wall there if your opponent is bent on keeping the corner... I also saw the hint about your opponent's move, and I thought, well, hey, you really need TWO points to enclose a corner, and he's only got one, right?

Gilles b is obviously the best point. It is an extension (vital in my opinion) for both sides.

However, the situation looks a bit artificial. The marked white stones should be followed by b. If W didn't play b, she should not have played this marked stone. This should be confirm by a stronger player...

Spectrums- I like a or c on this one. Nothing has been developed on the side, and no matter what white does, you can still grab a piece of the center.

griffin- B is by far the best in my opinion. A extends to the secondary direction of the encloure, but why when you can extend to the primary? The marked black stone is low, thus that whole side is disvalued. since extending from an enclosure and to one have the same value, and since the marked stone is low whereas the white stones below B have potential to be attacked, B is better. D is certainly a good point,but "urgent before big". White has neglected to make a base, and B punishes white for that omission, plus is and ideal extension. B also serves 2 purposes, while D only serves one.

grolich- B is the only move in my opinion. The white group is weak (it will never die, but black can gain quite a lot by attacking it), which makes B an urgent point. No other point on the board is urgent. This fact alone is enough to make it the only move to consider ("urgent before big"). But there are even more reasons to back it up: it is a good extension from black's corner enclosure on top, making it a dual purpose move as well.

Once white's group starts to scramble for a base to make eyes, or to run, black will gain thickness if it tries to live on the side, or thickness and/or territory/moyo if white runs to the open center. In either case, the white group will be pushed around.

In other words, by attacking, black dominates the flow of the game.

AxSqrd  I think B is the best move. It seems to make the white stone near it considerably weaker. C and D just seem to be pointless and don't accomplish anything. If you think otherwise, contact me. I'd love to learn from my multitudinous array of mistakes.

Windir-B is Best move because it make 2 things, extend and attack. D also Big but only a kakari and white can extend to other direction. a is the second direction for the black shimari, b is the first direction this black shimari(upper right) want to extend. Why C is wrong, definetly is the black stones standing already on 3rd line. Its done. if u play c an 4th line you want to extend further to 3rd line to complete the shape. But 1. white has sente 2. white is already in the way. So 4th line -> development, 3rd line completition!

Pashley (I'm about 8k, so take my opinion with salt.) I see a as too passive and d as good but, contrary to some opinions above, not urgent. To me, b is the obvious move since it is a nice extension, and it blocks a nice White extension, so it is urgent. It also puts pressure on the three W stones lower right; it may even be sente since if W tenukis, B n6 or some such will cause trouble.

After that, a and d are almost miai. If W takes d to establish a strong left side, a is good for B, and if W extends at the top or needs a gote move to stabilise the lower right, B has d as an answer.

Move on to: Fuseki Exercise 2